Last fall, Politico’s Daniel Libit noted that Sixth District Congresswoman Michele Bachmann had three press people on staff: one for national media, one for local media, and another for new media. Bachmann clearly loves the press, and the press loves her back — even the press that loathes her positions.

Like the chatty guest at the party, Bachmann seems to suck all the air out of a room. Right now, it seems like nary a day goes by without some story, in every outlet, about her advocacy or her antics. But just how much press does Bachmann get compared to more powerful local peers?

As it turns out, Michele doesn’t swamp the boat quite as much as I expected, or feared.

My goal was to see how many stories mentioned a given politician; eligibles included the state’s congressional delegation plus Al Franken and Gov. Pawlenty. For now, I’m only measuring quantity, not quality.

My methodology was crude but not baseless. For three local outlets — MinnPost, Minnesota Independent and City Pages — I  used Google. Within each website’s domain, I sought first mentions (first/last name plus common misspellings such as “Michelle Bachman”), filtering out duplicate stories. For the Star Tribune, I used the ProQuest database available through the Hennepin County libraries. (The PiPress hides their archive behind a pricey paywall.)

Because of the limits of Google’s advanced search, I’ve included the past year’s worth of coverage through April 30. Conveniently, each outlet had between 2,500 and 3,000 politician mentions. Still, the numbers shouldn’t be taken as gospel, just general trends.

Going in, I wondered if Bachmann would top everyone’s ranking, but that was stupid considering Recount Mania — which, like Michele herself, encourages gawker-like behavior.

The Recount Twins topped Bachmann on all four lists: The “Al+Norm factor” ranged from 43 percent of all mentions in the Strib to 66 percent at City Pages. MinnPost and MnIndy clocked in at about 52 percent.

But Michele’s potency became visible thereafter. In the pie charts at left, you can see how the various publications spread their coverage. (Apologies for the spotty labeling, a chart export problem; the slice colors are consistent.) 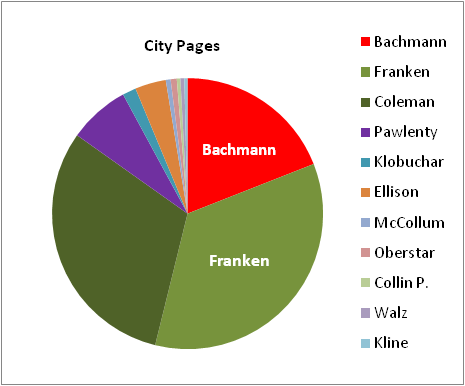 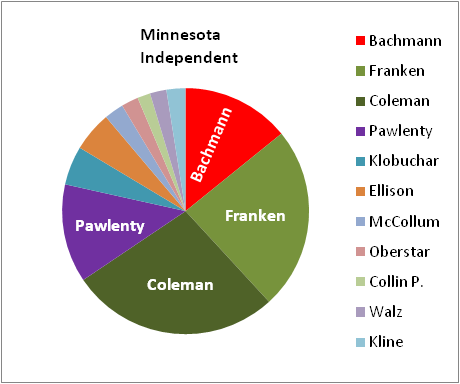 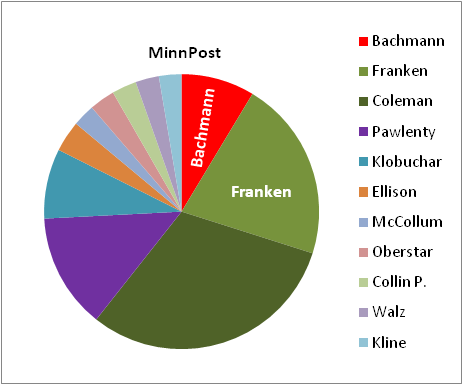 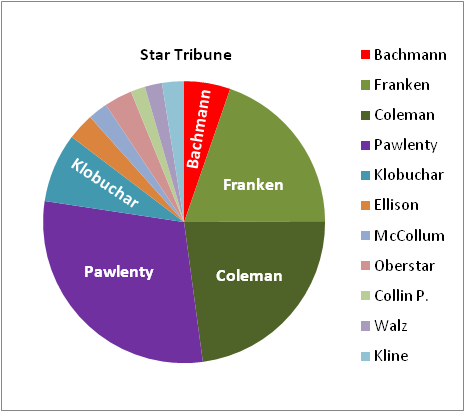 As you can see, CP has the biggest “Michele factor”: 19 percent of total mentions. Minnesota Independent is second (14 percent), followed by MinnPost (9 percent) and the Strib (5 percent).

Only two titles, the Strib and MinnPost, mentioned Gov. Pawlenty more than Bachmann. (The Strib mentioned Pawlenty most often, the only outlet to do so. I suspect the PiPress and MPR would also.)

At Minnesota Independent, Michele beat TPaw 425-387, and City Pages favored the taxophobic Congresswoman more than 2-to-1 over the taxophobic governor.

What about Bachmann versus Amy “The Lone Senator” Klobuchar?

The Strib favored the cautious woman over the incautious one 3:2. It was a dead heat at MinnPost, tilted to Bachmann at MnIndy, but was a 10-to-1 Michele walkover at City Pages.

I’m sure few will be surprised Bachmann topped her fellow House members (though for the record, Minnesota Independent was the only one that mentioned Keith Ellison more than Klobuchar).

I emailed Independent editor Paul Schmelzer and City Pages’ Kevin Hoffman to get their take on their coverage choices. Did Bachmann deserve all the attention? And did it divert from covering less glamorous but more important political matters?

“For us, it’s like the old saying, “You write about the planes that crash, not the ones that land safely.’ Michele just happens to be a plane that crashes a lot — often more than once a week,” he wrote.

Schmelzer took the higher road, noting the congresswoman’s rising national profile. “Bachmann’s active (and plentiful) engagement with the media is a story in and of itself, as is scrutiny of the content of her media appearances.”

Both stressed that covering Bachmann isn’t necessarily labor intensive. They often “re-blog” others’ coverage (a la MinnPost’s Daily Glean) “so picking up someone else’s fact-check is both relatively easy and not very time consuming,” Schmelzer argued.

“Bachmann’s utterances are ‘breaking news’ — which requires very little in the way of resources, and is usually a different group of reporters than those who are on investigative/enterprise beats,” he said.

It’s fairly well-known that anything Bachmann is page view gold. For example, on MinnPost last Friday, Cynthia Dizikes’ utterly substantive story about the congresswoman’s clash with House Financial Services chair Barney Frank was our top-ranked story by over 800 page views; My utterly frivolous one on Bachmann’s glancing mention in a Twitter spoof finished a strong third.

Schmelzer, who acknowledges Bachmann is also a balm for his traffic says, “It lifts our spirits to see more readers coming to the site — and I’d hope that those visitors would take a gander at our other non-Bachmann content — but we don’t cover Bachmann because of traffic. … The stories we’re most proud of don’t get lots of traffic, but we’re just as committed to producing them — moreso, really — as we are Bachmann stories.”

Am I buying all this? Well, mostly. Speaking personally, it’s hard to resist the siren song of page views even while providing substantive analysis. I’ve probably led Glean with recount stories a bit more often than might be objectively justified.

As I’ve written before, I wish City Pages covered politics more often, but they don’t, despite list-friendly covers on Pawlenty’s vetoes and lobbyists ranking legislators. I’m not sure they’d uncover, say, Collin Peterson’s nefarious deeds if Kaiser wasn’t rounding up the latest Bachmann outrage. My guess is there would be that many fewer political mentions overall.

As for Minnesota Independent, they are nothing if not politics-obsessed, and exist to report and critique the news from a progressive viewpoint. That puts anything Bachmann in their wheelhouse. They also do plenty of original work, even if they don’t share the Strib’s Pawlenty preference or MinnPost’s more generalized tilt.

In fact, if you’re of the Bachmann-as-Joe-McCarthy stripe, you can make a case that the Strib undercovers Bachmann, a criticism that might apply to MinnPost as well. But even if an individual media outlet’s choices aren’t what you want, it seems you have several different coverage philosophies to choose from.