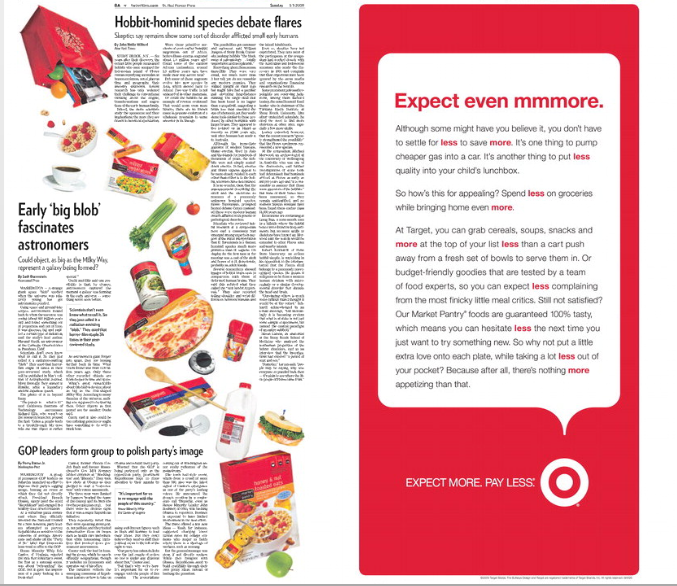 A couple of months after introducing the banded newspaper ad (below right), the Star Tribune, Pioneer Press and Target have crossed the next frontier in intrusive design with the diagonal layout (above).

Now, far be it from me to step on anyone’s airhose during the the media’s deep revenue dive. A month ago, I got a half-dozen anguished emails from newspaper fans worried Target’s circular wasn’t in the Easter paper; had the area’s biggest advertiser signed print’s death warrant? 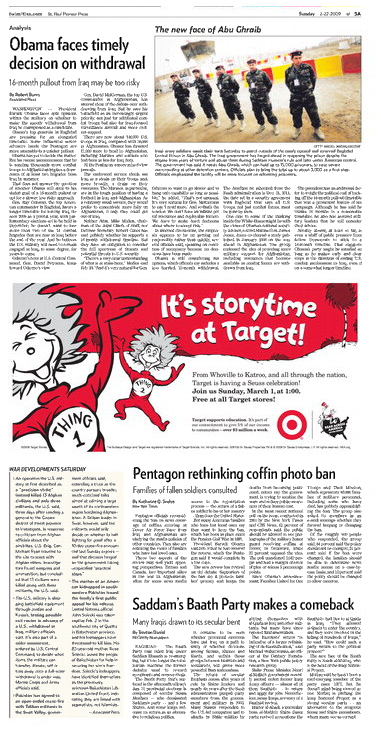 This week’s “special” placement definitely isn’t limited to the locals — you can get a look at the Wall Street Journal’s options here. And the journalism upside is that advertisers typically pay the full-page price while leaving room for two or three stories. As papers shrink, this may be a visible, but not indefensible, compromise.

It was a perturbed reader who contacted me, but will even this level of bother last? As I wrote two months ago “maybe we’ll get used to it.” Thinking about the issue again, I recalled a two-decades-old lesson I’ll call (appropriately enough) the “Target Center” principle.

Back then, I was writing a sports business column when the Timberwolves announced they were naming their new arena for a corporation. It seems mind-boggling now, but that was an area first. Up until then, we’d named our facilities generically or tacked on a politician’s name. (It is, after all, the Hubert H. Humphrey Metrodome.)

I can’t remember if fans were appalled (remember, Target Center was a privately funded facility at that point) but I know many found it strange. I’ll never forget Wolves marketing exec Tim Leiweke telling me something to the effect of, “Yeah, it sounds weird now, but believe me, pretty soon you won’t give it a second thought.”

He was right. Ever-accommodating Wild fans have lovingly nicknamed the Xcel Energy Center the “X,” and fans openly but not hostilely speculated on which corporation would attach its name to the Twins’ new park.

So the lesson, I guess, is the commercialism that seems intrusive often becomes banal; tuning out is the customer’s ultimate defense against advertising.

Of course, the parallel lesson is that if ads become too in-your-face, people devise workarounds (TiVO and AdBlock) or give up entirely (commercial radio). 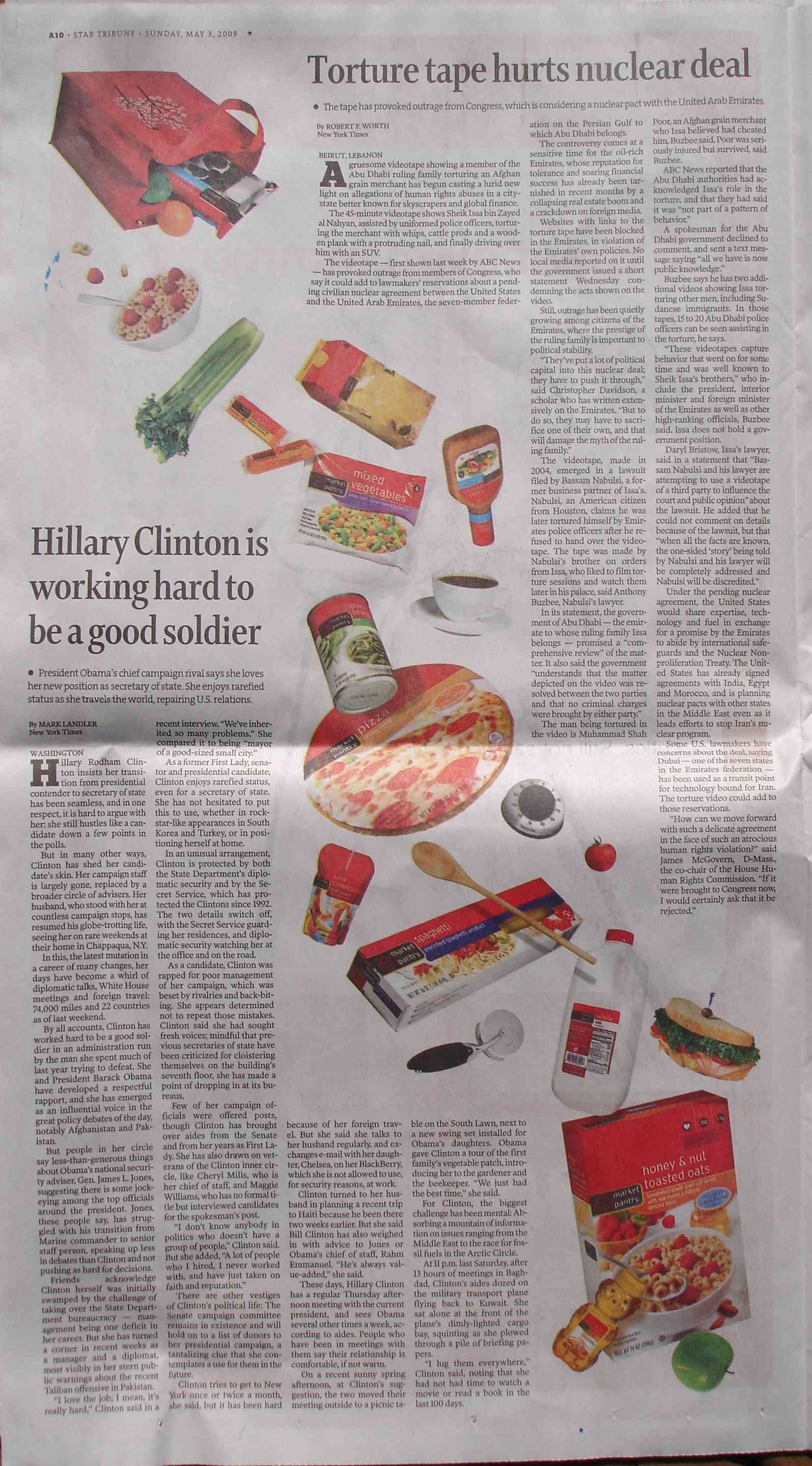 Even in a benign scenario, there’s a break-in period with pitfalls both for advertisers and newspapers. The upside of these new layouts is their ability to grab readers’ attention by maximizing the “touch” between ads and stories. The downside is more emphatically awkward associations.

The PiPress chose relatively innocuous stories to share space with the waterfall of groceries: one about early hominids; another about early star clusters. The Strib, meanwhile, accompanied the dancing pizzas and floating sandwiches with a story (at left) headlined “Torture tape hurts nuclear deal.”

The lede: “A gruesome videotape showing a member of the Abu Dhabi royal family torturing an Afghan grain merchant …”

I don’t envy layout editors these days; you don’t want the newsroom coddling specific clients, but at the same time don’t make core readers think you’re frivolous or thoughtless. Of course, we probably haven’t reached the end of this particular line. How long do you think will it be before we see a story inside a Target logo?