OK, the June Arbitron radio ratings — based on Portable People Meters, not diaries — are out, and radio stations can begin selling to the metered numbers.

What do they show? With apologies to spreadsheet-makers everywhere, let’s take a look: 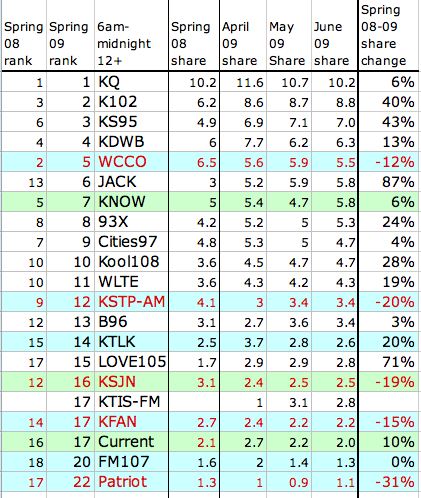 Obviously, this needs a little translation.

Stations are ranked by their April-May-June ’09 share averages. (Again, share represents pieces of the radio listening pie, and add up to 100.)

Twelve-plus isn’t the prime demo for any station (that’s usually 25-54 or 18-34), nor is 6 a.m.-midnight prime time. However, it’s the broadest measure of listenership — and for now, the one I’ve got.

Stations in blue are talk stations; stations in green are Minnesota Public Radio stations. Stations in red lost share between last spring and this one.

Notice: of the five stations that lost share, four are talkers (WCCO, AM1500, KFAN and The Patriot).

Only one talker went up: conservative beacon KTLK, though June 2009 was barely above spring 2008.

The bottom line? As noted yesterday, music stations such as JACK-FM, KS95 and K102 soared while yakkers fell. Due to PPMs? Can’t say for sure, but as noted yesterday, this trend has been played out all over the country, so probably.

How many listen?
One question I was asked yesterday: enough about share — how many people are actually listening?

I didn’t have those figures Wednesday, and still don’t for the diary era — though every radio exec I spoke to says the “cume” — weekly listeners — has risen for everyone. That’s because the meters pick up a “digital watermark” in each station’s signal, turning up a lot more casual listening that diary-writers reported.

Here are some of the 12-plus, 6 a.m.-midnight totals (April-May-June ’09 average) … and they are mind-boggling considering we are dealing with a 2.7-million-person metro area:

Time spent listening
The flip side of meters?  They also report that people listen less to any given station — which kind of makes sense if more casual listeners are being found.

Again, I don’t have diary numbers, but here’s how much — or how little — the average 12-plus PPM listener heard each week this spring:

Again, this isn’t the prime demo but still fascinating stuff. [I originally had minutes/seconds, but it’s hours/minutes.]

The liberal true believers (AM950) edge out Jesus’ true believers (KTIS and KKMS), with the women talkers (FM107), civic junkies (KNOW) and right-wingers (KTLK and the Patriot) right behind.

The longest-listened-to music station? Classical, which isn’t a big shock.

That’s it for now. More if I find diamonds in the data pile.