Hey, did you hear?

Now safely ensconced in Washington, U.S. Sen. Al Franken just signed a two-year deal (with a two-year option) for an hour-long weekly KSTP-AM show. As an elected official, he won’t get paid, but will have an unfiltered platform to speak directly to the public about the issues of the day. Press secretary Jess McIntosh will produce the show and screen guests and calls; wife Franni will appear frequently. 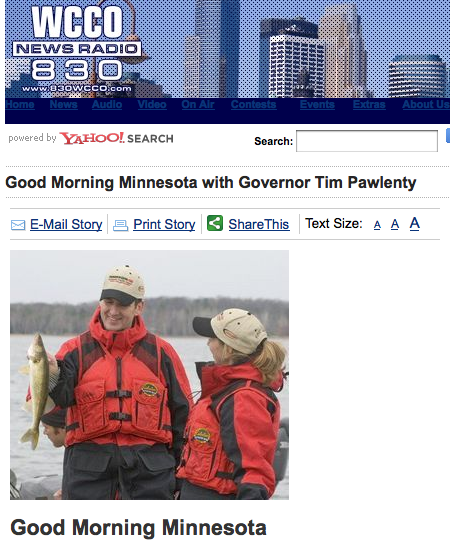 How you feel about this prospect — and yes, I made it up; it’s complete fiction! — should govern your view about WCCO-AM and Gov. Pawlenty’s Friday “Good Morning Minnesota” show. Wednesday, Sen. Majority Leader Larry Pogemiller sent the station a letter complaining about the governor’s “unfettered, unanswered access to the public’s airwaves,” especially after a June 19 show in which Pawlenty blistered Pogemiller’s DFL for a plan to “massively raise taxes.”

Pogey’s letter concluded, “In the interest of fairness and more fully informing your listening public, we are requesting your station provide a periodic segment following the Governor’s show for lawmakers of the opposing part to provide a different point of view. A publicly licensed station such as yours should be interested in ending the ongoing monologue and embrace a dialogue of the ideas and issues facing our state.”

Aiming at the station
I’ve always felt the governor’s radio hour was a weird deal, in that any station would flip the keys to any public official and stand back. Since I usually vote DFL, and the DFL hasn’t had a governor since 1991, I concocted the Franken example to check my biases (and perhaps yours).

Reached at his summer place up north, Pogemiller allowed that WCCO isn’t entirely at fault. After legislative DFLers griped about Pawlenty’s show a few years back, the station asked lawmakers to put it in writing. They never did; Pogemiller says his letter officially puts the ball in WCCO’s court.

For the moment, station officials remain firmly in the bunker, spurning media calls.

While the DFLer alleges Pawlenty’s show has “gotten progressively more partisan and aimed” at serving presidential ambitions, the majority leader’s programming beef is with WCCO, not the governor.

Pogemiller insists he isn’t looking to knock the governor’s show off the airwaves, and isn’t looking for airtime himself. “But if he takes off on Linda Berglin on health care, Sen. Berglin should get a chance to respond,” he notes.

Ducking the question
Despite the Pogey-‘CCO beef, Pawlenty’s office put out a disingenuous response late Wednesday, noting in part:

“Numerous Democrats and non-Republicans have been guests on ‘Good Morning Minnesota,’ including Senator Amy Klobuchar, Governor Janet Napolitano, Governor Ed Rendell, Mayor Michael Bloomberg, E.J. Dionne, David Gergen, and many others, and to suggest only Republican viewpoints are represented on the show is factually incorrect.”

Of course, Pogemiller’s letter never alleged that. It specifically states, “Occasionally affording some airtime to someone from the opposing party is not sufficient to counterbalance the governor’s partisan messages and ongoing cultivation of his public persona.”

Also: notice any names missing from the governor’s list? There are no DFL legislators — the people Pawlenty most pointedly criticizes.

The Ventura effect
Aside from the “massive tax increase” crack, Pogemiller could not identify other Pawlenty partisan outrages, though he notes the governor’s “lack of respect for the legislature is beyond the pale.”

Says Pogey, “I understand this all started under Jesse Ventura. He was pretty entertaining, and WCCO thought it was a good way to do public service and entertainment. But the governor gets them the time as an officer of the state, not a personal office. If he starts to use as personal forum rather than purveying personal activity, some questions arise.”

David Ruth is the Ventura aide who created the original show. Now the associate director for national media relations at Houston’s Rice University, Ruth is uniquely qualified to analyze the situation, since he later became a DFL communications official.

“I think it’s fair for [Pogemiller] to complain,” Ruth says. “WCCO used to offer time to the opposing party; when that ended, I don’t remember. There’s no equal time provision anymore, but absolutely, the opposing side should get some time, in some fashion.

“Frankly, though, the governor probably doesn’t care. I know [Ventura] didn’t care if the legislature got equal time. The total benefit is being able to talk to the people directly, without the media filter” — and beyond that, it doesn’t matter what anyone else says, on the same station, or elsewhere.

Ruth says Pawlenty, like Ventura, is “good at doing radio” — a skill in short supply among legislative DFLers, at least the ones I’ve heard. Pawlenty is a hot enough property that several stations sought to host the show when the contract came up for bid in 2006 — though as Ruth notes, free talent is another draw.

No fairness, nor equal time
Ruth also observes that we don’t mandate equal time on other over-the-air media — Norm Coleman didn’t show up regularly on David Letterman, for example. Then again, Franken’s segments weren’t done under contract with the state.

That deal — which was renewed in 2009 through the end of Pawlenty’s term in January 2011 — designates Pawlenty communications director Brian McClung as the state official given “sole control over the content of the Governor’s Radio Show and the identity or use of guests on the show.”

The contract also gives McClung the right to designate guest hosts. (It would be interesting if in Pawlenty’s absence the power defaulted to the legislature). The deal also obligates WCCO to air 35 live and pre-recorded promotional spots each week.

While the Fairness Doctrine mandating balanced coverage was repealed decades ago, there is one circumstance in which equal time still rules: Section 315 of the federal elections code.

That provision mandates balance, once someone is formally running for office. Section 315 forced Jesse Ventura off the air before his 1998 gubernatorial bid, when KFAN didn’t want to provide a three-hour bloc to other parties. Pawlenty also went on hiatus in 2006, when the governor was replaced by DFL mayors R.T. Rybak and Chris Coleman.

Of course, Pawlenty isn’t running for anything right now — at least not formally. Pogemiller insists national Democratic Party officials didn’t spur his letter as a way to slow Pawlenty’s presidential hopes. In fact, he says the letter was prompted by 10 angry constituent calls recently, not anger among his St. Paul colleagues.

Whether you buy that or not, if letting politicians speak directly to the people is in the public interest, WCCO should carve out time after “Good Morning Minnesota,” and let a broader range of official views be heard.

When local radio flips the keys to a politician