Probably way too wonky for a Friday afternoon, but the July Arbitron numbers are out, marking the fourth month under the new Portable People Meters.

Here are the charts and brief comments, beginning with the biggest measure of listenership — the share of radio listeners aged 6 and over, 6 a.m. to midnight. (Talk stations are in blue; public radio in green): 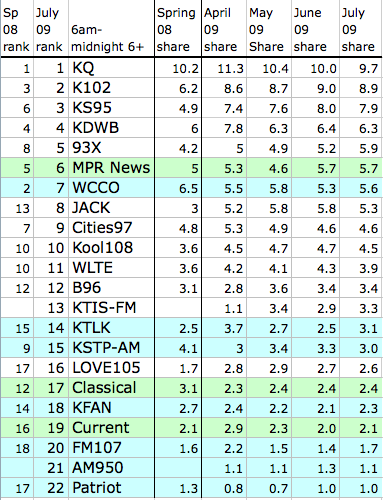 Although it’s a bit dangerous to compare year-ago numbers (diairies measured people 12+; PPMs take it to 6+), MPR News is showing some nice growth in its total audience in June and July; as noted in a previous column, May contained a pledge drive, and we’ll expect to see such listenership slides now that ratings are out every month instead of every quarter.

Conservative talker KTLK rebounded from a tough May and June. On the music side, KQ is slipping a bit (but have a long way to fall), while raunch rockers 93X are growing. KS95, country station K102 and robo-music JACK maintain their PPM era gains. 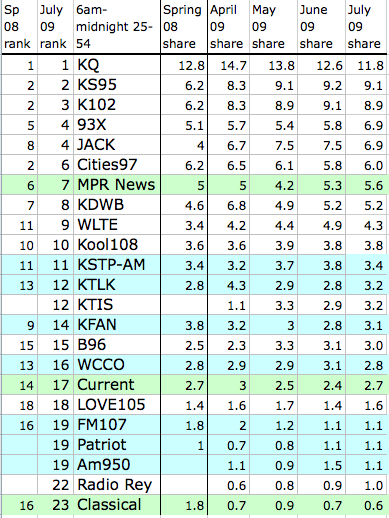 League leader KQ’s four-month slide is interesting, and the trends from the previous graph repeat. Overall, a fair amount of stability from June to July.

Next up: the talk radio demographic, men 25-54. First, morning drive: 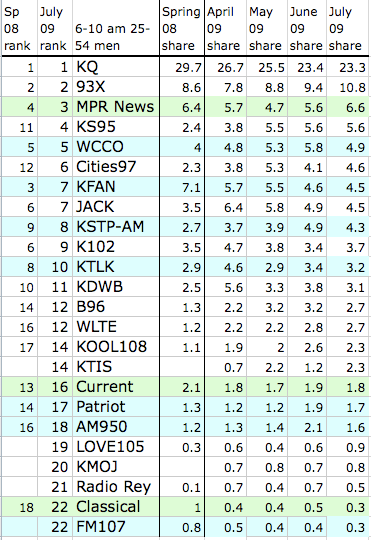 MPR News got a nice bump and is now above the diary era. KFAN’s Power Trip plus Paul Allen is slumping, while 93X again surges. At the lower end of the rankings, conservative talker the Patriot and liberal talker AM950 have both held on to post-diary gains as the healthcare debate rages. 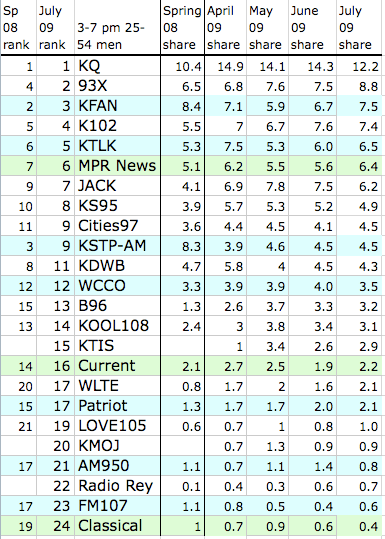 KSTP-AM continues to struggle in the Joe Soucheray block; the Twins can’t be helping. KQ’s erosion and 93X’s gains show up starkly here, but both are ahead of diary days.

KFAN’s Dan Barreiro has regained footing after a relatively bad May, MPR News has another strong drive time. Michele Tafoya isn’t wowing the boys this month, but her station is up from a year ago. The Patriot is gaining nicely.

Radio wonks: If you see something else noteworthy, please add your comments.