Last week, I promised you more summer fun with the Star Tribune’s comprehensive online survey, so here’s the latest installment.

This one’s a visual. The text is kinda small (click on the image for a larger look), but the set-up is, “If you lived in a city like Chicago, you would have a choice between two different types on daily newspapers.”

Readers are then asked to pick between a broadsheet (the Chicago Tribune, left) and a tabloid (the Chicago Sun-Times, right):

Now, surveys such as these cast a wide net by design, though the idea of a tabloid Strib is somewhat mind-boggling. Tabloids are generally the province of a market’s feistier (and often smaller) papers; the format grabs you with big photos and blaring headlines, and makes a skinny paper look meatier. The speculation over the years is that the Pioneer Press might go this way locally.

Tabloids are often thought of as “commuter” papers in transit-heavy towns — they’re a lot easier to read on a train, for example. While light rail is toddling along in the Twin Cities, there probably aren’t enough straphangers here to recommend the format.

Then again, there’s evidence out there younger readers prefer the picture-heavy format in almost all circumstances — for example, City Pages is a tab, and so is the Strib’s own vita.mn. Of course, both of those are freebies.

However, the Bakersfield Californian just converted to a tabloid on weekdays, while preserving the broadsheet for Sunday readers.

The Strib survey killed a little of the fun by not imagining itself as a tabloid. Thanks to our own Photoshop whiz, Corey Anderson, we’ve altered the question using the Strib’s Monday front page, and an alt-version: 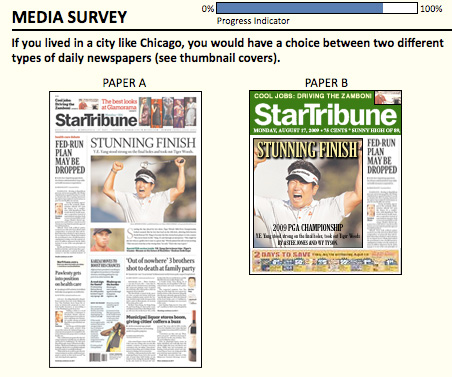 I know you want to soak in the details.

Here’s a close-up of the tabloid cover: 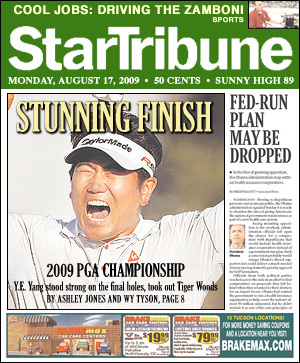 It’s fun to ponder whether the Strib would put out two editions — a broadsheet for olds like me who get the paper home delivered, and an aggressive tab to sell in stores and newspaper boxes. Of course, two versions might raise production costs and design hassles, but the Chicago Tribune does do something like this with its young-skewing, featherweight daily Red Eye.

Then again, the Trib is in bankruptcy, too.

Of course, this only changes the sizzle, not the steak — but assuming content (if not emphasis) remained the same, which would you prefer, and why? Comments most welcome.