The August Arbitron ratings are out, while perennial radio leader KQRS remains king, the rock station’s margin is the smallest in recent months.

First, the stats. Talk stations are in blue, public stations in green. The Summer 2008 ratings — done under the old diary system — are in italics, followed by five months of Personal People Meter data. (For more on that technology, click here.) 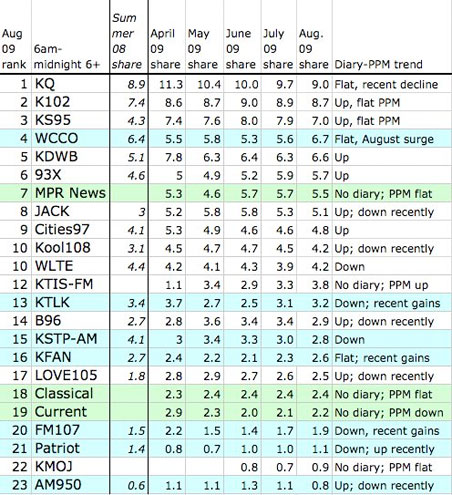 Disclaimer: The numbers represent the broadest listenership category (persons age 6 or over), not the advertiser-friendly 25-54-year-old demographic. I don’t have that data yet, and Arbitron reminded me of legal complications should I reprint those detailed numbers like I have in the past. Still, I’ll try to get you a stay-out-of-jail narrative soon.

As for the so-called “6+” shares (percent of radio listeners tuned to any one station), a few things jump out:

♦ KQ’s steady decline — four out of four months since PPM tracking began. Still, the station’s August ’09 number is just a titch above last summer’s 8.9. Country station K102 could soon capture a monthly crown. However, in the demos, the KQ Morning Show is probably still number one by a lot.

♦ A good month for the Good Neighbor. Experienced radio managers caution not to make too much of one-month jumps, since advertisers are used to buying by the diary book (which ran three months), or more often, multiple books. That said, WCCO’s jump to a 6.7 share represents its first gain over diaries.

♦ Other than KQ, the Top 10 music stations are holding their diary-to-PPM gains. (Meters better capture ambient listening in places like restaurants, believed to help the music stations.) WLTE is the only music station down from a year ago.

♦ Talkers, hurt by PPM technology, are inching up. Although WCCO made news with its August surge, conservative stations KTLK and The Patriot, sports station KFAN and women-focused FM107 have gained since May. Aside from ‘CCO, though, only FM107 and lefty station AM950 are up from the diary era, and AM950 is trending down. AM1500 is both down from diairies and down for the past four PPM months.

♦ Public radio seems to be holding flat, though I’m sure MPR wants to be more from The Current

♦ Christian station KTIS is showing recent growth and is within shouting distance of the top 10.