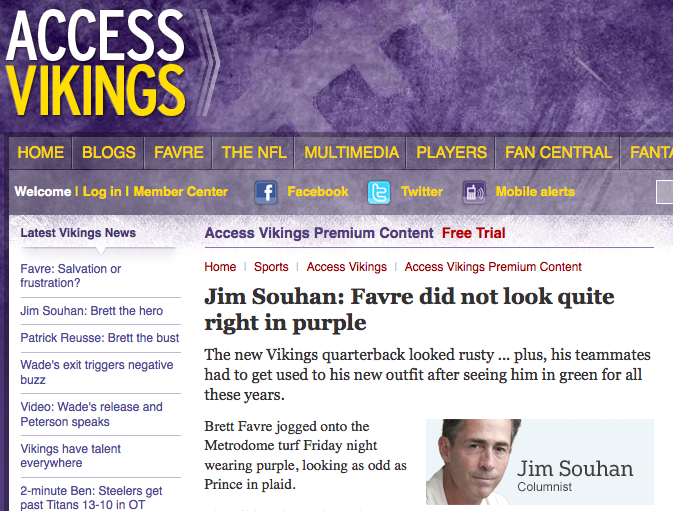 For the first time in seven years, Startribune.com will wall off some content and charge for it. While the Strib hopes to someday erect a broader paywall, for now, this one will be smaller and purple. As in 2002, it will encompass Vikings coverage — one of the site’s big traffic drivers.

The splashy “Access Vikings” site remains free for now, but you can see hints of what’s to come. The word “premium” is in some URLs, and the words “free trial” on some pages.

Assistant managing editor for digital Terry Sauer says charging will begin “in a few weeks.” Pricing isn’t set, but Sauer characterizes the monthly fee as “the cost of a cup of coffee.” I got the sense the price will be higher than SA java, but lower than, say, a Double Caramel Macchiato.

No get-rich-quick scheme
While much of the regular Vikings coverage will remain free, Sauer says spiffs such as beat reporter chats, some columns, photo galleries and non-staff blogs will be behind the smaller-than-Williams-Paywall.

“We know we need to be affordable with this new product,” Sauer says. “It’s more important to build a larger premium community starting out than have a tiny one because of a high price tag. There’s no get-rich-quick scheme involved here. But we need to start somewhere with a pay model.

“We know diehard Viking fans can’t get enough information, but I think casual fans will find it a pretty good deal too.”

Then-Startribune.com editor Ben Welter says that in large part, Purple Plus was done in by a truly horrid Vikings season. The team started out 0-4, sinking to 3-10 before winning their last three games. While that’s less likely to happen this year, it shows how phlegmatic Vikings fans can be.

In contrast, the Milwaukee Journal-Sentinel’s Packers Insider is a long-running success. Back in ’02, approximately 12,000 Cheeseheads paid $35 a year, putting $420,000 in the Milwaukee paper’s pocket. The price is now $44.95. Though the Journal-Sentinel didn’t get back to me about its current subscriber count, it’s worth noting that the Strib’s Digital Media director, Jason Erdahl, worked there through the 2005 season.

What’s different now?
I asked Welter, now the Strib’s copy chief, whether he thought his paper’s new paywall would work.

“I can’t speak to any possible plan to charge for Vikings content this season. A few factors do point to improved chances of success for such a product,” he says. “The online staff is much better integrated with the Star Tribune newsroom than it was in 2002. The sports staff is contributing far more to Startribune.com in the form of blogs and chats. There’s wider understanding among readers that great content takes money to produce. And the Vikings are a better team than in 2002.

“Does that mean Vikings fans would pay to read Patrick Reusse dissect Brett Favre’s performance after a disappointing loss, or mix it up in live chat with Judd Zulgad after a last-second victory? The climate for a premium product has improved in seven years — but I’m not sure by how much.”

Welter also noted that “the hard lesson, widely understood in newspaper circles now, is that there are too many other free alternatives to almost all the content we produce — even when we enhance it with exclusive material.”

If anything, that’s more true today than in 2002. Seifert, for example, covers the Vikings and other NFC North teams for ESPN, which didn’t have such a position then. (However, some of his work is behind ESPN’s “Insider” paywall.) If anything, there’s more NFL coverage than ever before, and competitors such as the PiPress, KFAN.com, bloggers or even the Vikings themselves might try to exploit “free” — if they all don’t start charging, too.

While Strib beat guys Chip Scoggins and Zulgad give nice chat, I’m not sure if all but the absolutely most rabid Purple fans will pony up for that, some paywalled-off Souhan and Reusse columns, and cheerleader blogs.

Still, in a day when newspapers have to find money where they can, plucking dollars from sports is a logical place to start.

When do print payers benefit?
There’s one other risk the Strib runs: that print subscribers — some of whom already pay upwards of $200 a year — will get pissed off as online reproductions are walled off.

For example, when the Strib began withholding certain print stories from the web for several days, there was no way for print subscribers to see content they’d already paid for. Similarly, someone who’s already bought Reusse’s print column should probably be allowed to see it online as well.

For now, the Strib’s philosophy is that buying print gets you that and no more. Sauer indicates that in the long run, the ethos will change — although charging will have to increase, too.

“Print subscribers are certainly highly valued and I predict they’ll see substantial online benefits if we ever go to a full website pay model,” he says. “But the plan for the Vikings premium now is to have a minimal charge for those who want it. This is the first foray into premium since Purple Plus. We feel better situated with a superior Vikings product to give our readers a good reason to sign up.”