I’ve heard from several journalists here and elsewhere speculating on newsroom cuts. There’s no evidence for that yet; while the money guys aren’t talking (at least to me), the Strib has filled newsroom departures in recent months, and the reorganization plan implies a stable headcount.

But of course, journalists have seen a lot of bloody rolling heads recently, and the new owners are bloodless financiers, not newspapermen. You can bet they’ve looked at comparables from similarly sized newspapers to see where the Strib is — at least in their view — fat.

The theory, or rather the fear, is that the overlords will rush headlong into the race to the bottom.

Mutter, an ex-editor and media entrepreneur who writes “Reflections of a Newsosaur,” pegs the traditional industry formula as 1 newsroom staffer per 1,000 daily subscribers. While some commenters questioned that standard, I’ll use it as a benchmark.

The disclaimer
The circulation data comes from March 2009 ABC reports, but there are caveats about the other statistics.

As for the counts themselves, most come from credible published reports (many in the papers themselves) and interviews. However, in a few cases, information is several months old. Also, papers can measure headcount differently; does the figure include web staff, editorial writers, administrative assistants, etc.?

Still, I’ve played with the numbers and a difference of 20 or so won’t change anyone’s place in the groups below.

Some papers including the New York Post, Daily News and Newsday, are missing; corrections and additions are welcome. A chart is at the bottom of the piece. Feel free to use the email address at right.

Based on the data, the papers fall into three groups:

The (Tarnished) Gold Standard
I know gold doesn’t tarnish, but go with me here. These are the papers with a better than one-to-1,000 ratio. In other words, they still employ more journalists than Mutter’s standard. But none are immune from layoffs.

The New York Times and Washington Post lead the pack; they have one journalist per 830 daily subscribers. Both papers are ambitious, with long-time family owners, who have covered big losses more than boardroom peers. The Times-owned (for now) Boston Globe stands at 1 per 920.

The other paper, curiously, is the Philadelphia Inquirer, at 1:961. The paper is in bankruptcy, but publisher Brian Tierney is fighting a loud battle to keep it out of the hands of creditors. One of his arguments is that local owners will keep more robust newsrooms than the money guys. He’s walking the talk, at least relatively, at least for now. (Note: the 300-person newsroom does not include sibling Philadelphia Daily News, and union and management agreed on the number.)

The Middle Class
Like our nation’s, this middle class is in decline. None meet the 1,000 standard, clustering around 1,150.

This is where the Strib lives. It has a 270-person newsroom and 320,000 daily circulation — one journalist for every 1,185 subscribers. To meet Mutter’s standard, it would have to staff up by 50 people. Don’t hold your breath.

Still, the Strib has tons of company: the Dallas Morning News, Chicago Tribune, Cleveland Plain Dealer, Atlanta Journal-Constitution, St. Louis Post-Dispatch and Arizona Republic. The L.A. Times is on the fringes, with a 1:1280 ratio.

What’s sobering is that many of these newsrooms have recently experienced severe whackings — to be on par with the Strib. The Journal-Constitution, for example, pole-axed 30 percent of its newsroom in March. It was in solid gold-standard territory until then.

This could mean the Strib got skinny first; you could argue they’ve already raced to the bottom and others are merely catching up. I’d certainly try to convince the new owners that the medicine has already been taken.

But of course, this isn’t the bottom.

The Bottom
These papers’ staffing is so skinny you can see rib cages.

At the top of the bottom is our own Pioneer Press, with one newsroom staffer per 1,425 daily subscribers. To meet the Mutter Standard, the 135-person newsroom would need 57 more bodies, or, to be on par with the Strib, 27 more.

Conversely, if the Strib’s new owners cast a covetous glance eastward, they’d shrink their newsroom from 270 to 224. Let’s just forget I said that.

Fellow group members include the Baltimore Sun, Detroit Free Press and Denver Post. Like the PiPress, the Free Press is in a two-paper town; it has stopped home delivery on several weekend days. The once-proud Sun is at the end of the Tribune Co. empire, and felt the bankrupt chain’s sternest lash. The Post, which became a monopoly paper when its rival collapsed, is the flagship of PiPress owner MediaNews Group.

These papers are all in the 1,500-1,600 range, but there’s a fiery inner circle sporting more than double the Mutter standard. These include the Chicago Sun-Times, San Francisco Chronicle and Houston Chronicle. I’ve heard the C-word — for Chronicle — a few times in recent weeks. That would result in a newsroom half the Strib’s current size.

The data
Below is the list of papers, circulation and newsroom size. Though I’ve ranked them by ratio, don’t get too hung up on small differences, given data uncertainty and rounding.

I should also note that two national papers at the very bottom, the Wall Street Journal and USA Today, have very high ratios (2,700 and 4,900 respectively), but neither has a local news staff. 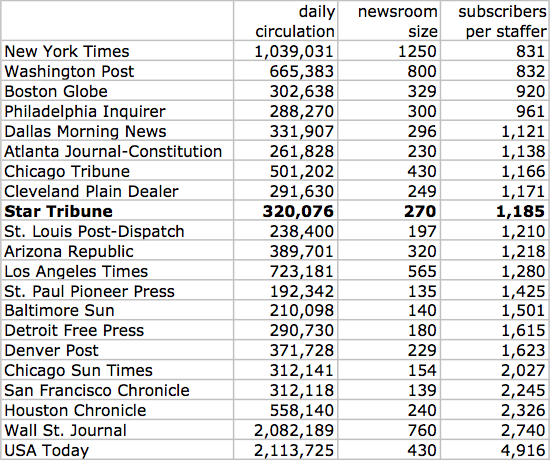