So you think your local daily has gone a little ga-ga over sports lately, splashing it all over the front page with increasing regularity?

They’ve got nothing on the Duluth News Tribune, which today printed half its front pages in Vikings purple, and half in Packers green.

Here’s the Vikings one — if you click on the image, you can see a small version the Packers front page in the lower left: 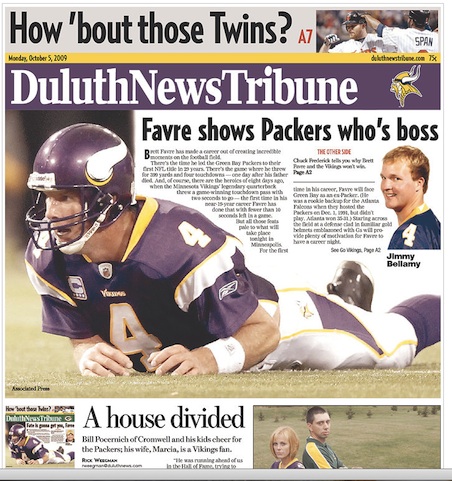 It’s all in good fun, obvious water-cooler material, but it’s also a sugar high for a circ-challenged paper.

Last week, I noted that the News Tribune had probably fallen to #4 in the state, behind the Rochester Post-Bulletin. That was confirmed via the paper’s own business blog last week, which essentially ratified a Perfect Duluth Day’s report.

According to New Tribune publisher Ken Browall, daily circulation has slipped from 38,753 in 2008 to 33,268 this year. That’s a 14 percent drop. Browall says most of the decline came from trimming distribution area; subscriptions within the “kept” zone fell 3 percent.

Trimming unprofitable outlying circulation areas is something many papers are doing, but it means a lot fewer Vikings and Packer fans up north saw the News Tribune’s version of fall colors.