For many months, I’ve brought you tales of Minnesota newspapers cutting and retrenching; shrinking staff and circulation areas.

Among the biggest retrenchers has been Forum Communications, which happens to own more state dailies than anyone else. In August, Forum announced one of its biggest pullbacks, chopping the Red Wing Republican-Eagle from five days to two. 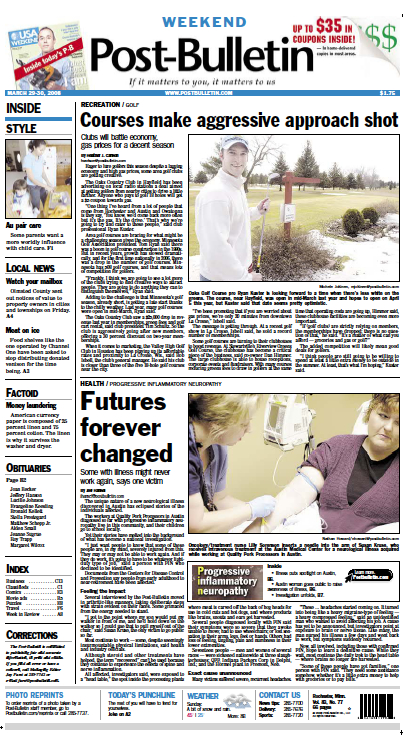 Too bad, so sad. Get to know the web site, Red Wingers.

But unlike a hundred other American towns, print addicts weren’t left high and dry. A competitor rushed in.

On Sept. 22, the nearby Rochester Post-Bulletin announced it had hired a former Republican-Eagle staffer to cover Red Wing government and sports, and would begin Monday-Saturday home delivery.

Why not Sunday? The PB doesn’t publish that day — one of its many wrinkles. Among the Post-Bulletin’s other oddities are:

The Red Wing push isn’t the first time the PB has made a neighboring community a two-newspaper town. Ten years ago it moved into Austin, Minnesota — an unlikely spot for a news war, given the blue-collar demographics and the presence of the 118-year-old Daily Herald.

“First of all, I can just about see Red Wing; it’s that close,” says Furst, the paper’s editorial supervisor. “We’ve covered Goodhue County in the past, and we always will, but we’ve only had a couple of single-copy spots in Red Wing — we’ve never home-delivered.

“We’ve covered their sports, but frankly, we’re going to devote more space to Red Wing and Goodhue government, schools, get to more sports events, build up the obituaries, and be a dynamite local paper.”

By my reckoning, the PB may now be the third-largest weekday newspaper in the state, supplanting the Forum-owned Duluth News Tribune, which lists 40,106 in an undated electronic press kit.

The PB is family-owned, and has not been immune from layoffs; the most recent was last fall. Furst tempers the subscriber stability accomplishment, noting, “Rochester has changed so much in the past 15 years, and circulation hasn’t kept up with growth.”

Still, the 55-person newsroom is staffed well compared to most. The PB still has a state Capitol reporter, and writer Jeff Hansel took home Premack Award for medical coverage last year. (His entry is the image above; click for a full look.)

Furst says he’s a devotee of the Readership Institute, Northwestern University’s “best practices” research center. He notes the 34-38-page Rochester papers carry little wire or non-local news. Ditto the 12-page Austin paper, which is a stand-alone that eschews Rochester news. For now, Furst says, Red Wing coverage will be a part of the Rochester edition.

“Local is the key to make us tick,” Furst says. “When Ted Kennedy dies, it barely merits a skybox [at the top of the front page]. We have a page of world and national news.”

Even in a well-educated, relative prosperous home town of the Mayo Clinic, such concentration may be easier because some subscribers take the Star Tribune or New York Times as their morning paper. The PB has repeatedly asked readers what they prefer, and the answer keeps coming back “afternoons.”

Maybe the PB’s existing Goodhue County presence helped force the Republican-Eagle’s move, though Forum’s chain-wide cutbacks indicate this is more than a local effect. And maybe these satellite communities will come to resent an out-of-town owner, if that owner becomes the last paper standing.

Then again, most non-metro towns losing papers or editions don’t have a remotely interested nearby savior. Rochester is one place where “local, local, local” seems to work enough to fill another locality’s hole.