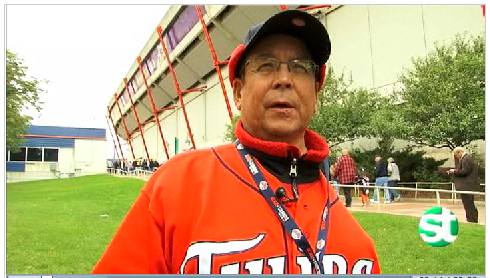 If you read last week’s post on Target Field’s signage, you may have noticed the “Michael Samuelson” photo credit. Sammy is an old buddy from my “Save the Met” Days, and today, he was featured in a lovely video by the Strib’s J. Pinkley and Aimee Blanchette.

Sammy is literally a die-hard baseball fan; as he notes in the video, he’s had an arm hacked off; he gets some other dude’s kidneys every few years.

Thankfully, his loudmouth factor overcomes the pity factor (be sure to catch the priceless anecdote on Sammy stopping a game), so we can all still razz him for being a corporate tool when he sings along to the Hormel weiner song.

But when it comes right down to it, our obnoxious buddy may be the best baseball fan in the world, something that kids, pals and Metrodome workers know in their hearts. Thanks to the Strib for giving Sammy a well-deserved moment in the digital sun. As they note, isn’t only about where you watch the game, but who you watch it with.