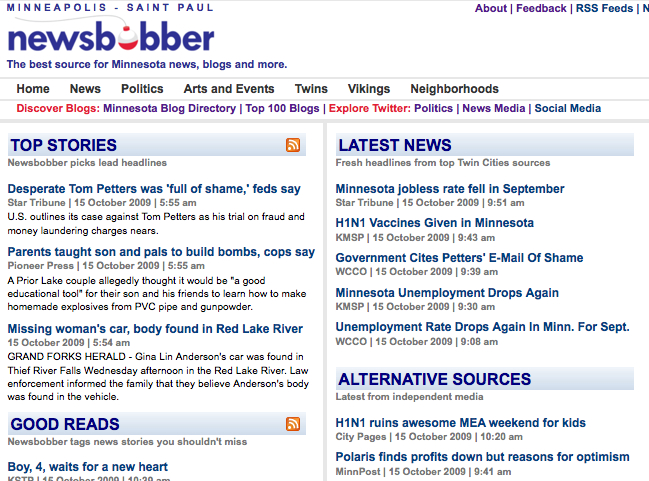 Back in the day, Minneapolis’ own Utne Reader referred to itself as a “clutter cutter,” one that chomped through alternative news sources and distilling them into one neat magazine.

As everyone knows, the information flow has become a firehose, and clutter cutters are more necessary than ever. Which brings me to Newsbobber.com, an extremely promising local site from former Pioneer Press reporter Bob Ingrassia.

Unlike MinnPost’s Daily Glean, or Rick Kupchella’s new and intriguing Bring Me The News, Newbobber’s local news aggregation isn’t all hand-built — and is far more comprehensive.

Top stories, top blogs
First-time, potentially overwhelmed Newsbobber visitors might find the site’s features in need of their own culling, but once you focus your eyes, the gems appear. 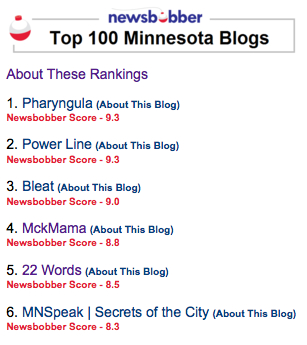 The top six, as of Thursday morning

Ingrassia has already received good press for his “Top 100 Minnesota Blogs,” based on algorithm, not opinion. It’s the sort of list that gets the blogerati chattering. Civilians might be more compelled by the Minnesota Blog Directory, which helpfully curates almost 700 blogs by topic.

I can tell you, Minnesota’s bloggers — at least the handful I’ve spoken to — are pumped about someone trying to make sense of their universe.

What might make Newsbobber your new home page is its mix of auto-generated and Ingrassia-curated headlines. Features such as “Latest News” and “Alternative Sources” rely on Ingrassia’s initial evaluation of quality sources, but then the coding takes over. “Good Reads” and “Featured Posts” are individually picked favorites, tagged in the social bookmarker Delicious to pop up in Newsbobber.

All of the features have their own RSS feeds. If you’re already an RSS junkie like me, Newsbobber’s culling is less vital. But a huge advantage of Ingrassia’s approach is that the automated blog directory plus savvy pushes things into Newsbobber feeds I’d not otherwise know about.

Reportorial judgment, techie touch
It’s not every dude who can bring news judgment and coding skills to the party, but Ingrassia qualifies. At the PiPress, he was one of the co-originators of the City Hall Scoop blog in 2007, and now manages the information flow between CNN.com and local stations as national news editor for St. Paul-based Internet Broadcasting.

Ingrassia calls NewsBobber “somewhere between a hobby and an enterprise,” one he hopes “other media partners or a publisher would be interested in using in a partnership or some other way.”

He says he has “irons in the fire,” but won’t reveal who he’s talking to: “Mainly, talks have been over the blog directory as distinct content. Not many other outlets need me for aggregating content.”

That’s too bad, because no one locally has perfected the modern-day clutter cutter. Glean does a nice job adding narrative, but it’s only once a day, and as its former author, I can tell you it was exhausting to compile and contextualize. Over at Bring.mn, news director Tom Elko is finding out the same thing, one reason the site (which has already driven an impressive amount of traffic my way) just added soon-to-be-ex-MinnPost biz writer Dan Haugen as an aggregator/reporter.

Where Newsbobber is packed, Bring.mn’s design is spare, which is not only a design choice but one that gets sponsor content, integrated into “story stacks,” more attention. Newsbobber, which relies on Ingrassia’s spare-time passion and his wife’s tolerance, doesn’t have similar commercial considerations yet.

A need for more than a blogroll
The sitemaster says Newsbobber’s evolution began in this spring.

“I saw a need for a Twin Cities or Minnesota news site that brought together mainstream sources, alternative and independent media and this huge array of blogs together. When I started searching, there were blogrolls, but there really wasn’t an a central resource that wasn’t outdated,” Ingrassia says.

“It quickly became evident that that the blog directory needed to be more robust than a blogroll — it needed to be searchable, and sortable, in away a normal blogroll can’t.”

Ingrassia uses web metrics, including Google Reader subscribers, Google PageRank, and data from the Canadian site PostRank to build his rankings. He updates the numbers every week.

With BrauBlog kicking along at Number 22, my only whine is that the method tends to penalize blogs that are part of larger sites, where Google Reader users can subscribe to the site’s larger feed. Ingrassia notes his algorithm isn’t perfect, and he’s constantly tinkering. But my self-servingness aside, stand-alone sites sometimes need more publicity, and the results are objective and very good.

A Minnesota blogging town square
Ironically, Ingrassia hopes to include subjectivity soon: “My next phase is to add a user vote or fan vote,” he says.

Ingrassia emphasizes that not every blog in Minnesota is included in the blogroll. “I want it to be blogs with a track record, with updates, and ones that are not obscure to the point of not caring, not someone’s personal blog. Still, it’s an open door — the default mode is, ‘Yes, you’ll get in.'”

Ingrassia is also messing around Twitter culling, or, as it’s known at the bottom of the page, “Twitter Box.”

“I’m trying to eliminate the noise and hold up a higher standard,” he says.

As with his curated headlines, he discerns “Metro Tweets” via hashtags and key words, and “Media Chatter,” where yours truly is over-represented and more newsie names are necessary. (Nominate folks here.)

For now, his Holy Grail is fuller interactivity, where Newsbobber becomes something of a blogging town square. In addition to people ranking blogs publicly, they could also build, house and share their own blogrolls, commenting on favorites or nemeses.

That may be a bit more clutter than most cutter-lusters want to take on, but to Ingrassia, the richer data can potentially boost aggregation — the good kind, that is.