When the Star Tribune cut back its much-mocked vidcast “NewsBreak” to two days a week this summer, I figured it was the beginning of the end.

But the cynical media critic was wrong! As promised, it’s back and … better.

Never fear, haters: there are still some public-access production values to jeer at, and this viewer remains more interested in the idea of NewsBreak — the quest, if you will — than the actual execution. I also still fear a scripted newscast from non-newscasters remains a big time-waster in a shrunken newsroom. But let’s discuss the improvements first: 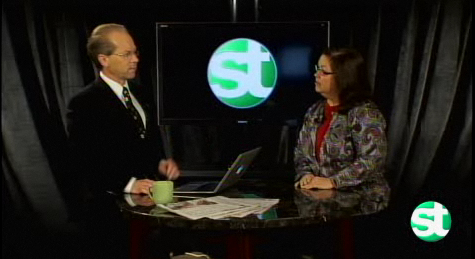 Lileks and Lopez on the spooky new set

1. They’ve decoupled headlines from the rest of the show.

2. The headline segment, a tidy 80 seconds, focuses on things that happened that morning. I’m the sort of person who likes to read the headlines, not watch someone reading them, but if you’re wired this way, it works.

3. The graphics, while simple, work.

5. The longer segment, at least today, clicks right away with a pretty good debrief from political editor Pat Lopez, on the Sex Offender big-screen TV story. I’ve urged more of these, and this one flowed nicely.

1. The long-segment backdrop looks like Lileks and Lopez are inside one of those black plastic leaf bags that are about to be banned. I get that it’s supposed to highlight the big screen TV monitor (non-sex-offender model), but Lileks is too perky to be trapped in Dracula’s Lair. Cable access touch #1.

4. The hosts are still fish out of water, and this still feels more conventional and dutiful than original and inspired.