Took my second Target Field tour Wednesday with the “Save the Met” crew, anti-Dome diehards who failed to derail indoor baseball way back when. Thirty years later, they saw the powers-that-be re-embrace their paradigm — albeit at excessive taxpayer expense that still has founder Julian Loscalzo spitting nails.

For me, the visit was mostly personal recon for an upcoming cheap-seats season-ticket purchase. But it happened to be the day they were installing a really cool version of the classic “Twins Shaking Hands” logo in dead-center.

So I thought I’d pass along a shot (via an iPhone, so minimum megapixels) and a brief video (shot with a non-HD Flip Cam, my first-ever attempt, so minimum competency).

First, here are the dudes on a Twins sleeve patch (with the newfangled Twins logo rising above them): 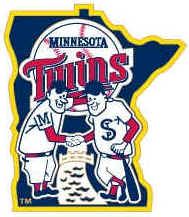 Now, the center field sign. It’s missing the uppermost panel, but you get the idea: 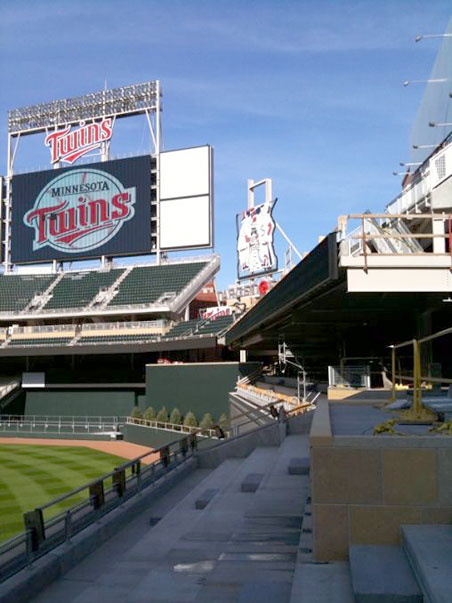 I’m not positive, but I think the dudes will shake hands after Twins homers.

If you want to see much better photography of the event, only from outside the stadium, check out Rick Prescott’s obsessively wonderful Ballpark Magic blog. Better yet, bookmark it and add it to your RSS reader.