Tiger Oak officials and the buyer, soon-to-be-ex-company president Jim Bergeson, did not return calls for comment. However, Knox confirms her position was eliminated as 24-title company prepares to shrink to 15. 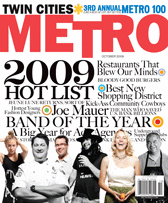 According to a company media release, the sale will close Oct. 30.

Does Tiger Oak need cash? In the release, Tiger Oak’s publisher, R. Craig Bednar stated, “The sale provides Tiger Oak the resources and capital to focus on our current titles and expanding their market share.”

In recent months, I’ve received numerous tips that Metro was about to close —which have never proven true. At the same time, two freelancers have contacted me complaining about checks that are up to nine months due, and other ex-employees have complained about missing W-2s. I called Tiger Oak about these matters last month and also didn’t get a callback.

Knox wouldn’t comment on the company’s balance sheet, but I asked if she expected Metro to survive. “I think any print publication right now is in a somewhat precarious situation, but if I had to lay money on it, I’d bet on it surviving,” she replied. “It’s the strongest, most relevant title, and it’s been here three years already.”

I asked her what she meant by “strongest,” since Metro’s competitors, Mpls.St.Paul magazine and Minnesota Monthly, have bigger ad bases and are much more established, though they’re struggling with the same economy.

“Graphics, service, writing and subject matter,” Knox replied, noting that Metro is designed to fit in “the niche between City Pages and the retirees of Mpls.St.Paul and Minnesota Monthly.”

This has been Metro’s mantra from the start, and they do have talented writers like Chuck Terhark. In the early months, and again lately, Metro has had a pleasant patina of social concern amid the restaurant reviews and fashion. And it is nicely designed. However, the niche Knox describes, especially with the luxury and print-ad markets in the toilet, may be more like a sliver.

In December, the Strib heralded a “glossy outlook for Tiger Oak,” including Bednar’s boast of boosting sales from $17 million to $21 million this year. The story also noted ample competitor skepticism.

It’s possible the sale of the meetings titles to Bergeson was strictly strategic, allowing Tiger Oak to concentrate on the upscale, though this sure looks like a forced retrenchment. If I hear back from the company, I’ll let you know their take.