You want a great illustration of just how great a business Bill Kling has built at MPR? Check out this chart of public-radio organization size in the Top 25 markets. (Click image for a bigger version.) It’s from Kling’s recent presentation to the Corporation for Public Broadcasting, via Karen Everhart, who covered the presentation for the public-broadcasting trade site Current.org: 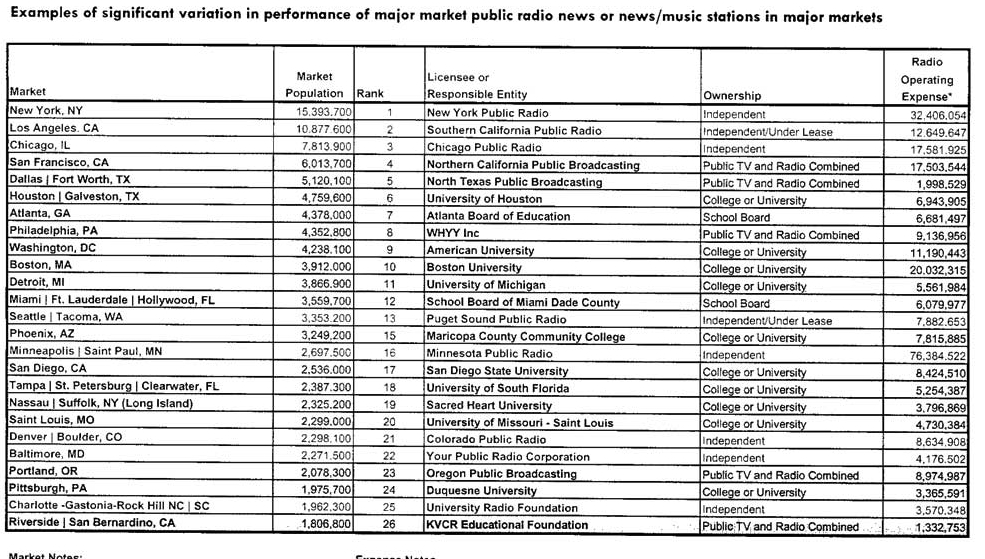 Not only is MPR more than twice as big as New York’s WNYC (take that, Yankee fans!), no other market is within $56 million of MPR’s $76 million radio operating expense.

It’s pretty easy to read this success two ways. You could take the view of Strib board chair Mike Sweeney, who argues that MPR’s accomplishment means it should get off the taxpayer teat. (By the way, the Strib continued its war on taxpayer-supported radio this morning by reprinting this St. Cloud Times op-ed, even though the target isn’t an MPR station.) Kling, I suspect, would argue taxpayers should be proud they’ve helped finance a nation-leading operation.

I don’t want to ignore the thrust of Everhart’s article: Kling’s call for public broadcasting leaders to “build larger and stronger local stations, free of the universities and other institutions that own most of them.” MPR, of course, has absorbed stations like St. Olaf’s WCAL (see conflict note here), and operates Pasadena Area Community College’s KPCC in California.

It sounds like Kling is extending his local “newspapers are dying, we’re next” argument nationwide, and is a little peeved that his smaller cousins don’t have more dough to buy MPR’s national shows:

“Without redress, these weaknesses ensure that public radio cannot accept the mantle being handed to it and that many think it should embrace,” Kling wrote. “Moreover, as the retail face of national producers for most content, the underperformance of local stations not only deprives those communities of an ideal alternative news model for each community — it is also the primary cause of the financial weakness of national producers where few national programs, from Morning Edition to Marketplace to The World, can break even from station carriage fees and related underwriting.”

Kling also took a shot at organizations with TV components. According to Everhart: “In the case of joint licensees, [Kling] wrote, radio revenues are too often siphoned off to subsidize pubTV operations, preventing the radio outlet from reaching its full potential.”