As regular readers know, I’m powerless in the face of a spreadsheet. So to follow up on last night’s post about October radio ratings, I thought I’d gin up a chart on how the corporate overlords are doing.

While the numbers below only cover total listenership, not the ad-coveted 25-to-54-year-old demo. But this gives you a window into another way these guys compete, at the ownership level.

There are five corporations that control 85 percent of the radio market:

As you can see from the chart below, Clear Channel is the big dog, with middle three comprising a second tier, and MPR a very healthy fifth. 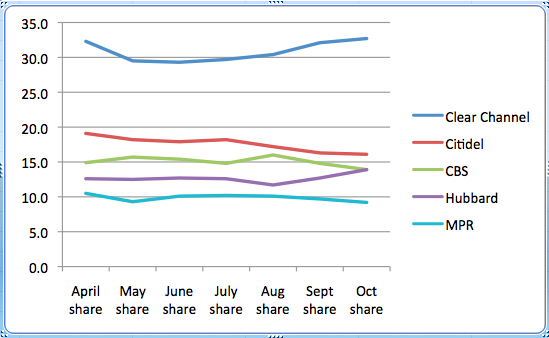 There’s not a ton of variation in market share over the past five months, but Clear Channel and Hubbard ticked up this month on the strength of their sports properties: in CC’s case, the Vikes, and for Hubbard, the Twins.