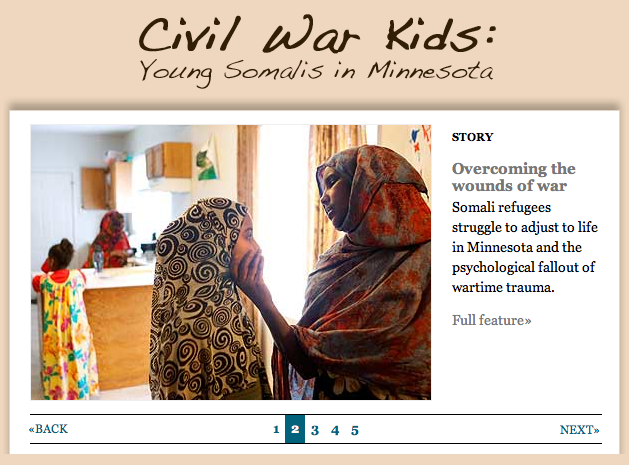 Laura Yuen’s aunt called her niece excitedly on way to the airport Monday. “Laura, guess what? I’m in a cab, and my driver is Somali, and he’s listening to your story! And guess what? He wants to talk to you! He has some feedback!”

The MPR reporter chuckled recounting the conversation. In the year since plunging into the “Somali beat,” Yuen has developed so much trust in a community others find insular that she gets calls, emails and “24/7” text messages from Somali listeners and sources.

The culmination of Yuen’s labors — “Civil War Kids: Young Somalis in Minnesota” — aired Monday through Wednesday. It’s simply too awesome to get sucked into the undertow of the 24-hour news wave. The multimedia package is a hugely effective, deeply reported mix of text, sound and new staff photographer Jeff Thompson’s imagery. 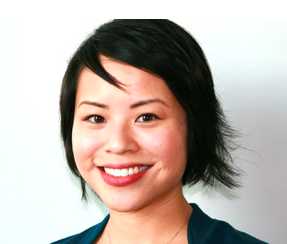 As with other local deep dives, Yuen’s series is pegged to the continuing violence among Somalis — 11 local deaths in 13 25 months, including a recent triple murder in Minneapolis’ Seward neighborhood.

But the work is far from sensationalist; Yuen is a humanizer of the first rank who doesn’t ignore inescapable problems. Yes, the terrorist group al-Shabaab gets discussed — but so does the ex-gangbanger with the ropey scar tissue and damaged vocal cords who has become “part youth counselor, part bouncer” at a local mosque, and the mom who lives on the 32nd floor of the Riverside Plaza Towers and runs up and down stairs to “train” for the task of keeping her family together.

“She really did climb her way to self-sufficiency,” Yuen says.

The reporter’s human touch earns her searing testimonials like this:

Once homeless, Osman now lives in a south Minneapolis bungalow with other young Somali men who bear the psychological scars of war and the trauma of seeing loved ones killed or tortured.

“In my nightmares, I get shot in my sleep,” he said. “Somebody will say, ‘You remember me? Ismail, you killed me. You take my life. Now I’m here to take yours.’ And I jump out of bed. I’m sweating, hot. Sometimes I get up screaming.”

Yuen admits that before she tackled the subject, “I hardly knew anything about this community and probably knew fewer than five Somali Americans. I live in Seward, my neighbors are Somali, but even though I’ve been there five years, I just felt like I never got to know them.”

Yuen acknowledges that MPR initially became interested in the Somali community after competitors beat them on the “missing men” who left Minnesota to fight in a failed state. She had to overcome the community’s deep skepticism, reflected in MPR colleague Bob Collins’ February 2009 dispatch, “Why Somalis don’t trust the Twin Cities news media.”

Yuen — one of the media members under the gun — noted then that there were only two Somalis in her Rolodex when she got the assignment.

But once set on the task, she found people willing to help. “I went out to coffee with someone who became a very good source of mine, who wrote down on the back of napkins all the clans, all the history,” she says. “I remember my head spinning, learning about this failed state in an hour over coffee.”

Having had a few Somali cabdrivers and coffee shop conversations in my day, I mentioned to Yuen that she might have had one advantage: invariably, if the radio isn’t tuned to music, it’s tuned to MPR.

“The Somali community is very news-savvy, very plugged in; they are voracious readers,” she replies. “They know when you don’t really have a handle on the issues, but they are very willing to teach you if you go beyond the self-promoting sources.”

Yuen says her editors, who included project editor Laura McCallum, sensed the complex nature of the story and initially paired her with producer-reporter Sasha Aslanian. “She was a wonderful partner,” Yuen says of Aslanian. “As you probably know, Sasha comes with a wealth of radio documentary experience. We just started interviewing people, especially young Somali-Americans, and came back with hours and hours of tape. Those early interviews gave us precious insight into the community and helped us inform our coverage.

“There was a talk of us doing a big project one day, but our editors told us not to get hung up on that, knowing how daunting projects can be. They encouraged us to do at least a story a week to get our name out there. That was a wise approach, because as you know, on any beat, stories beget more stories.”

The series that did result, she says, “didn’t come from editors. It came from the community saying you really should focus on this youth crisis more than al-Shabaab. There’s a generation gap, and also a melancholy of a whole young generation they inherited from an older generation with mental health problems from the war.”

As Yuen documents, Somalis — like many Americans — have a binary approach to mental health, where crazy is ripping your clothes off on the streets and anything else isn’t. “Mental illness is a bigger problem than what has come to light because of the stigma; there’s nothing between crazy and not crazy,” she says.

One of the beauties of radio is being able to hear daughters testifying about the anguish of their mothers, and mothers speaking of the pain of their sons.

One danger of such portraits is they risk making a community already under siege feel further oppressed. That cab driver who wanted her aunt’s cellphone? Yuen says he told her, “I really hope you’re going to tell the other side of the stories, the positives — and then he offered to be interviewed. I told him those stories were coming [and they did, on Wednesday], and it would be irresponsible in a major narrative not to tell the success stories of people from a failed state.”

Yuen — a former Pioneer Press reporter who is technically MPR’s east metro correspondent — says that after spending 80 percent of her time on the Somali community, her focus will become more geographic. “The people in St. Paul want to hear more coverage of their community,” she says.

Still, the second-generation Chinese-American calls “Civil War Kids” the most satisfying work of her career, with shimmers and reflections of her own experience.

“My parents are immigrants but not refugees. I’ve had a chance to explore my roots in Taiwan and China, and I know that sense of longing. You have to ask yourself why would young men want to go back to the most dangerous place in the world, but some tell me they feel like a part of their life is missing,” she says.

“I feel like reporting on the Somali community, and understanding their stories and struggles, has profoundly enriched my life. I told a source of mine yesterday that I don’t know if I would be strong enough to function if I went through what Somalis have gone through. He said he hoped that I would never have to experience that kind of pain and suffering, but he assured me that I could get through it … and that human beings are resilient creatures. I feel like I learn something new every day when I report on this community, especially lessons of strength and survival.”