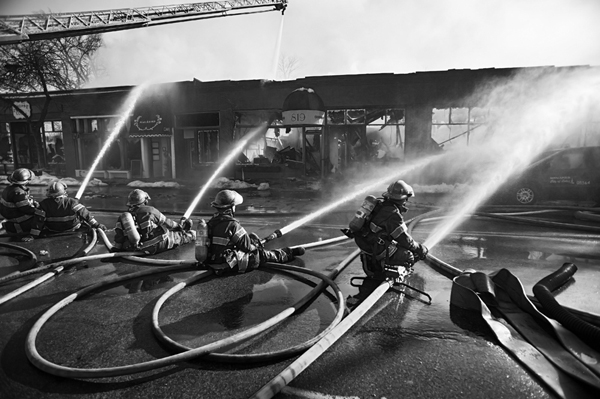 No one died, but a lot of folks lost their jobs and dreams in Thursday’s fire at 50th & Bryant in southwest Minneapolis. I’m sure the blaze was covered more lavishly because it occurred in the heart of monied Minneapolis, and so many media folks live near there, dined at Blackbird and Heidi’s, and shopped at Patina and Shoppe Local.

Still, that preoccupation paid off with a couple of impressive developments on the digital media scene.

One came courtesy of WCCO reporter (and noted foodie) Jason DeRusha, who cleverly combined his blog, his usually goofy JasonCam, and a chat function to “cover” the fire. DeRusha blended WCCO’s copter video and the station’s reporting with the comments of concerned neighbors and diners. DeRusha initially recognized the interest via social media such as Twitter, then publicized his effort via those channels, instantly creating a real community node, and a real community service.

While this was an especially powerful example, DeRusha leveraging new reporting techniques and social media is dog-bites-man at this point. Less predictable was the all-out effort by Heavy Table, Jim Norton’s one-year-old dining site, which scrambled contributor Kate NG Sommers to the scene and blogged the disaster all day.

Sommers produced a very nice photo gallery of the awfulness, including this stunning black-and-white image (reprinted above, with permission) that will rip the heart out of all of us who know the intersection well. Great work, people, and a great way to show how well a specialty site can pull off breaking news.