It’s always fun to see how front-page designers prioritize when there’s more than one big story; in this case, history-making social policy versus a history-making baseball contract.

The Star Tribune gave over most of its front to health care reform, with a banner headline running across the page, a rarity these days. Over at the Pioneer Press, Joe Mauer got the art, and two-thirds of the page. Have you heard he’s from St. Paul? 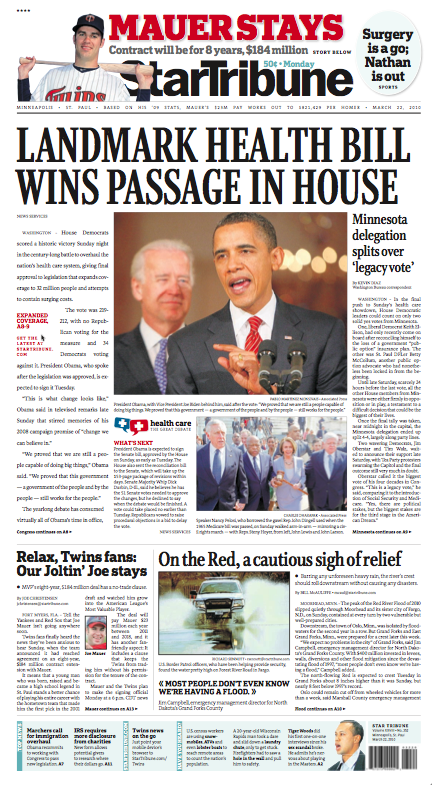 And meanwhile, in St. Paul: 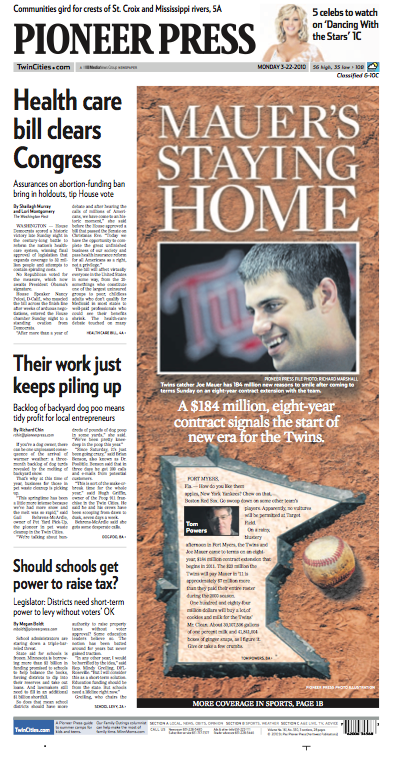 Neither paper ignored the other story, of course. The Strib placed Mauer’s mug, and the red-letter news, at the top of the page, to somewhat awkwardly flag a small newsbox at the bottom; the Pioneer Press put health care top left (though with a Washington Post story, since the paper doesn’t staff D.C.). Overall, I though the Strib captured the day.

By the way, fun fact: In addition to expanding access and banning discrimination on pre-existing conditions, health care reform is financed in part by a 0.9 percent Medicare-tax surcharge on individuals making over $200,000. That means Joe will pay an additional $205,200 annually on his $23 million-a-year deal.

Another truth: Joe could buy either paper, and probably both, with his $184 million extension. But I suspect his financial advisors have other ideas.