Usually, when governments try to get outtakes or notes from media outlets, there’s a fight. The journalists zealously protect their work product — at least the part the public hasn’t seen — so they won’t be seen as snitches. Sources, present and future, tend to notice these things.

But for the first time in news director Lindsay Radford’s seven years at KSTP-TV, the station disgorged nearly eight hours of unaired video and minute-by-minute logs to the city of St. Paul in a March 22 probe of loafing pothole-fillers. 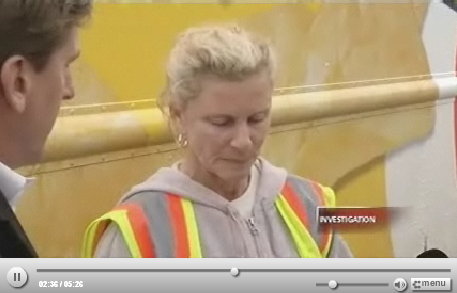 That civil-service process (which isn’t criminal), prompted the city’s quest for evidence.

Typically, Radford says, KSTP makes lawyers get a subpoena if they want anything from the station, and then “we give them what aired. We don’t give them raw [footage], we don’t give that up.”

The pothole case, she notes, “is the first time in my tenure we’ve willingly handed over material. Bluntly, it raises the hair on the back of my neck.”

So why do it? Simply put, the station that shouted “Outrage!” found it hypocritical to sit out the clean-up.

“The feeling, from [general manager] Rob Hubbard on down, is that we’ve documented some pretty egregious behavior in a city department,” Radford says. “The city can’t take a full course of action without the material. We felt strongly that this needed to be corrected, so we handed it over.

As to the charge KSTP has become an investigative arm of the government, Radford says the station would also turn over the footage to the workers’ union or lawyers, should they ask.

She notes an unusual circumstance with this particular information: nothing came from a source.

“It’s strictly material we observed, it all happened in the public eye, and didn’t go above and beyond what any citizen could have seen,” Radford says.

“You want to know how we came up with the story idea? Several years ago, I went to [an investigative reporters and editors conference] and saw a story done by a reporter in Houston. Part of what the workers were doing was sleeping, driving to the end of cul de sacs, dumping asphalt, and logging the potholes as filled.

“So when the potholes got bad here, I asked if there was any kind of tracking system. Bob said he’d go find out, and it turns out [St. Paul] doesn’t do anything to track them. So he went and followed a crew. He came back and said, ‘You’re not going to believe what’s going on.’ So he went back another day, followed a second crew, and when he kept seeing the same thing, we said, ‘Really?’”

Radford emphasizes KSTP preserves its right under shield laws, should the city or workers seek additional information or testimony from station personnel.

“We did spend about an hour, meeting with [St. Paul’s] head of Human Resources. We were curious to know, by handing over the material, what their intentions were, who was viewing, and the path of the material. Would Bob McNaney or [producer] Mike Maybay become witnesses?

“Frankly, we don’t make very good witnesses for the city. We saw what we saw, and the material stands for what it is.”

But, she adds, talking with the city was “a way for us to document how the process works. It will take about another month before the disciplinary procedure and arbitration, from a news perspective, plays out.”

Media lawyer John Borger of Minneapolis-based Faegre & Benson says voluntarily surrendering material shouldn’t create a precedent that will make it easier for the next bureaucrat, or prosecutor, to obtain station information. Borger, who does not represent KSTP, recalls media organizations giving over raw footage in the 1990s, when journalists were attacked on Minneapolis’ north side.

Another unusual facet of KSTP’s decision is that city investigators are seeing footage viewers haven’t. Journalists’ first responsibility is to the public, and in cases where stations have been forced to give up footage, they first air it (sometimes in early morning hours) or put it on their website so everyone can see it.

Radford says KSTP discussed uploading the full footage on KSTP.com, but that a redesign that was being unveiled around the same time complicated the video transfer. “It’s something we’re still debating.”