Well, this could be fun for public-radio news junkies: KFAI (90.3 FM) is on the verge of big changes in its programming grid, and could fill the 5-8 a.m. slot with “The Takeaway,” co-hosted by 15-year National Public Radio vet John Hockenberry.

KFAI’s research showed, “the station that KFAI shares the most listeners with is KNOW, Minnesota Public Radio News. This trend is the strongest in the morning, 6am-9am.”

Given KFAI’s signal strength, low public profile and far smaller newsroom, I don’t think MPR is quaking in its Guccis, but listeners should appreciate the choice. For die-hard lefties, “The Takeaway” is no “Democracy Now!” — Hockenberry is far less likely to be arrested on the barricades than DN’s Amy Goodman — but like KFAI listeners, the show is internationally oriented. “The Takeaway” is also aimed at younger listeners — which KFAI’s Adam Mehl defines as under 45 — though this 50-year-old didn’t hear huge differentiation in approach or story choice. At worst, the target demo could find this the sonic equivalent of your dad in a leisure suit.

As a community station, KFAI is nothing if not participatory, and there are still several hurdles, including three volunteer meetings, before the programming grid gets cemented. But “The Takeaway” is only one component of a fundamental reordering of shows.

Basically, KFAI would stop its daily hopscotch of music and news programming that encouraged channel-changing in favor of clearly defined format blocks. (You can read the narrative behind the proposed changes here.) As you can see below, there would be 6-9 a.m. and 6-8 p.m. weekday news strips, and with a nine-hour music run from 9 a.m. to 6 p.m. 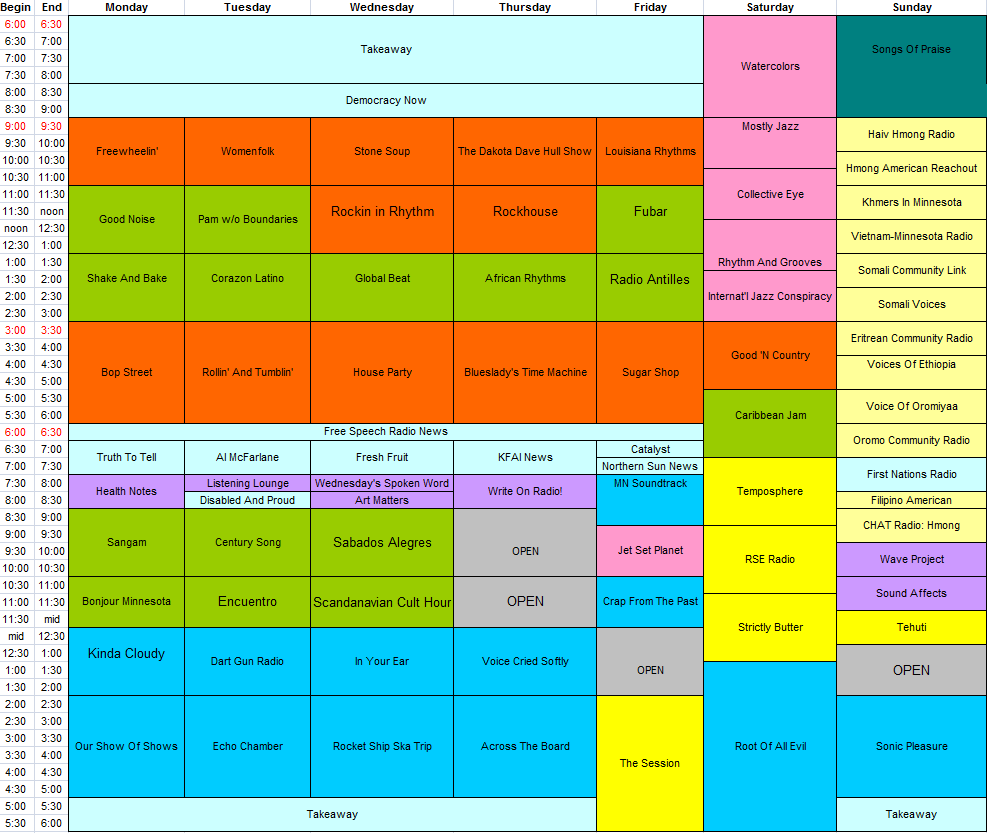 Mehl says local news wouldn’t disappear during the day; in addition to local cut-ins during “The Takeway” and “Democracy Now!” (which would move to 8-9 a.m. from noon-1 p.m.), KFAI’s one paid staffer and 35 volunteers would provide three-minute top-of-the-hour news reports that include produced pieces. “We would actually have more news,” he says.

As I’ve noted before, KFAI is in the midst of a five-year audience decline, so changes are a must. The recommendations are the results of research and focus groups; Mehl says people preferred daytime music 2-to-1; the audience was split about drive-time news versus tunes, but “younger audiences preferred news and public affairs.”

According to Corporation for Public Broadcasting rules, KFAI must spend 28.7 of its money on nationally syndicated programming, so “’The Takeaway” makes sense, Mehl notes. “There’s some cool things involving local stations, like when there’s a big local story, they’ll rely on their [local affiliates’] reporter at the national level.”