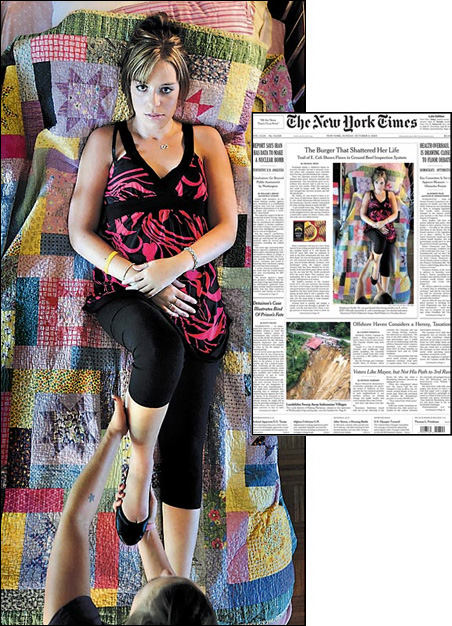 A Minnesota corporation was a target, a Minnesota dancer was a victim, and a Minnesota photographer shot the arresting front-page photo that graced the New York Times’ “The Burger That Shattered Her Life,” which today won the 2010 Pulitzer Prize for explanatory reporting.

Though Stephanie Smith’s story had been chronicled by the local media, Times reporter Michael Moss used the e. coli-poisoned and paralyzed dancer’s tale as a jumping-off point for a months-long investigation into the U.S. food-safety system … or lack thereof.  As I wrote in October:

“… Moss tracked an E. coli-laden patty back to the feces-filled slaughterhouses from whence it came. Moss’ investigation revealed a shocking system where the feds don’t require E. coli testing, and slaughterhouse often sell to grinders who agree not to test shipments.”

The company at the heart of Moss’ expose is Minnetonka-based agribusiness giant Cargill. And the photographer whose arresting front-page shot (above) undoubtedly sucked more readers into the story is the Pioneer Press’ Ben Garvin.

Garvin – whose bosses allowed to take selected freelance assignments for the Times and Washington Post – won’t get a share of the Pulitzer medal, says, “I hesitate to celebrate because it’s not my Pulitzer, but I’m proud to be associated with Michael Moss and proud to be a tiny part of that story.”

Last October, Moss wrote to Garvin, “…wanted you to know there’s been a huge reaction to the story and I have to believe much of it has nothing to do with the words, but rather your work, especially the front page shot of her which was just fabulous.”

There’s substantial false modesty there – the reporting was fantastic enough on its own — but Garvin says there is an important lesson for journalism organizations.

“When a good story has a great photo, it pushes it further. Sometimes, photographers get word about stories late, so a good story doesn’t get a great image. The basic idea is, an OK story with a great photo gets on the front page, and a great story with no photo runs on the inside page. It’s a totally self-serving notion, but given time to be there, we will make great pictures.”

Garvin says his bosses didn’t have a problem with him running up to Smith’s Cold Spring home to get the image because her case had already been covered locally. “I never accept a story that’s competitive in nature, like breaking news or politics – you don’t want to burn bridges on either side. But this was much more of a long-term piece, so there wasn’t a competitive consideration.”

Garvin who began freelancing for the Times before he came to the PiPress six years ago, says he sent 13 or 14 images to New york, and they picked the one of Smith looking soberly up at his camera, with her home heath attendant working on her legs. “She was mad at Cargill, mad that she was paralyzed every day from a hamburger, but she was really a wonderful woman, funny, and really nice to work with.”

Efforts to reach Smith Monday were unsuccessful, and as you can imagine, Moss was also a bit busy. I’ll try to give you an update on Smith’s condition, and whether the Pulitzer Prize-winning deep drive ended up changing anything, as soon as I can.