OK, this is maybe the third-most compelling lieutenant-governor news of the past 24 hours, but it’s an interesting tale of web-era journalism, politics and archiving. 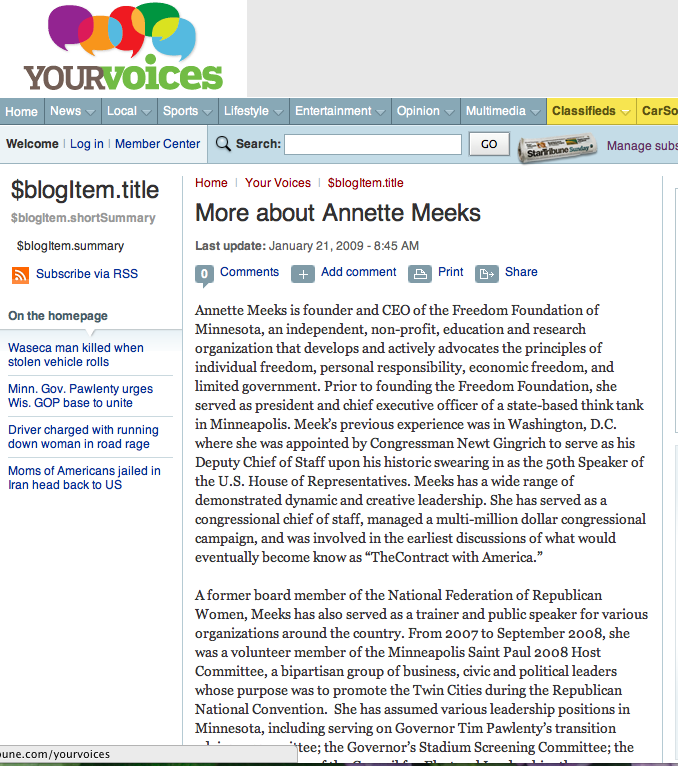 Over the weekend, I heard from a fellow journalist that blog posts penned by Annette Meeks for the Star Tribune in 2009 and 2010 had disappeared. Google only turned up a rudimentary landing page (screenshot, right) and a stray link or two; nothing on the Strib’s website. Basically, her writings had tumbled down the memory hole.

This is a medium-sized deal because Meeks is now presumptive Republican gubernatorial nominee Tom Emmer’s running mate. The idea that her previous statements wouldn’t be easily available for the press, public, or rival politicians to examine just seemed wrong.

Monday morning, I emailed Strib Assistant Managing Editor/Digital Terry Sauer asking what the heck was up, and how many blog post Meeks has written.

David — We took Annette Meeks’ “Your Voices” blog down earlier this month. The community blogger contract states that blogging is suspended during the course of a candidacy. In addition, we wanted to eliminate the perception that she had an active blog on our site during this time. The archive of her posts was affected by this move. She was a popular blogger and had written 16 posts over the course of a year and a half.

I can see a media outlet not wanting to let a blogger-turned-candidate use their blogspace to tout a candidacy … but this outcome was nuts. The Strib archive, for example, still included Meeks’ commentaries (the ones that ran on the op-ed page), but not the less-filtered expressions of her worldview.

After I pressed the case that Meeks’ words needed to live somewhere, the Strib responded. As of 2:49 p.m. Monday, the blog lives, with a simple solution: an editor’s note explaining the situation. I appreciate the responsiveness!

Have at it, fans, foes and undecideds.