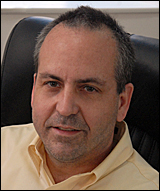 While Bonner had to navigate clubby St. Paul in his 24 years with the local paper, he now finds himself managing a 29-person staff in a country where politicians and oligarchs are much more powerful than weak civic institutions.

In Part 1 of our discussion, Bonner discussed the failure of President Viktor Yushchenko and the Orange Revolution. In this part, he describes eroding press freedoms, the real life of a foreign journalist who is also a manager in a strange land.

David Brauer: What’s press freedom like in Ukraine? Do your reporters face Putin-style repression or anything close?

Brian Bonner: The Kyiv Post has thankfully been immune from overt pressure.

Our publisher and owner is Mohammad Zahoor, a British businessman of Pakistani origin. The Kyiv Post is one of his smallest assets in his diversified portfolio of media, real estate and other assets. He wants good, arms-length relationships with those in power. He tells me to be fair in the news coverage, but never interferes, which I respect greatly.

There are signs that [new president Viktor] Yanukovych is stealing a page out of Putin’s playbook — first through controlling the national TV stations, where most Ukrainians get their news. Journalists from the No. 2 channel, 1+1, have complained of censorship; others have talked of government directives of what to cover and what not to cover. 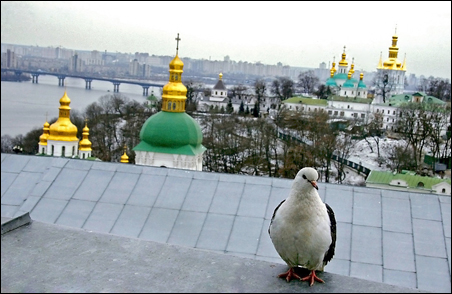 For the most part, however, it seems like the oligarch owners of the TV stations are directing favorable coverage of Yanukovych. There’s pressure to get on the Yanukovych bandwagon.

But so far, the administration has shown no desire to go after newspapers, Internet and the like. It is most concerned with national TV.

Sources still commonly demand to see stories in print before they are published — journalists still tend to be treated as servants or enemies, the advertising market is dismal and journalists’ salaries suffer as a result.

There are big consequences to all of this in terms of economic fairness alone and turning the spotlight on injustices.

There has only been one public, competitive privatization of all the billions of dollars in Soviet factories, industries, etc. inherited by independent Ukraine. That happened in 2005 with the largest steel mill. The rest have been shady backroom deals; and that looks like it will continue under Yanukovych.

That’s why, despite being a poor nation, Ukraine has some of Europe’s richest billionaires.

Lest I paint too gloomy of a picture, prompting you to ask why anyone would live here, I should say that — for a journalist — the news here is much more exciting than in many other places.

Moreover, Ukraine has a lot of plusses — wonderful people, beautiful land, rich agriculture. Poverty and repression have prompted many to over-achieve educationally, to study and learn several languages and other specialties.

You can’t but help empathize and admire people who have tried many times over their history to achieve national independence only to have it taken from them by invaders, or to sympathize with the plight of a people stuck between Hitler and Stalin between World War II. Theirs is a live-for-the-moment culture that is both healthy and harmful.

But the sun is out today in the ancient capital!

DB: I know you were a big labor guy in St. Paul. What are unions like in Ukraine? Does labor have an effective voice?

BB: The official labor unions are mostly controlled either by political parties or industries; the independent ones are weak; or labor unions are simply non-existent in most workplaces. Unions, overall, don’t seem to have much leverage in the workplace.

By some estimates, as much of 40 percent of the economy is in the shadows — off the books. This is not a good environment for asserting employee rights. Employers still call the shots. They are able to set low wages because the economy is in poor shape and competition is lacking. They are able to fire people at will. Sexual harassment/age discrimination are problems for which no effective legal remedy exists. 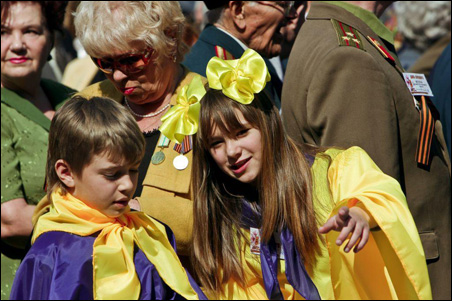 As everywhere else, those with better educations and in-demand specialties have leverage. Moreover, many Ukrainians have more money than what they show or what official statistics count because of the large shadow economy.

Employees who are able to have official status have it somewhat better — their incomes are counted for their pensions, they have more rights protecting against firing.

Sometimes, this is to the extreme. We had an official employee who abused a feature in the law which says nobody can be fired as long as they are in a hospital or have a doctor’s note that they are under treatment and unable to work. I think this employee gamed the law, and so this kind of thing happens. A standard of two-months severance pay upon dismissal has developed; it’s not much, but better than nothing. State pensions (social security) are almost all under $150 per month.

Ukrainians do, however, have many official holidays built into the year and are entitled to at least four weeks of vacation under law (if they are official employees, again), so there are compensating factors.

Many Ukrainians get by because many still live two or three generations to a single apartment; those in the country grow their own food, etc. It’s a tough life for millions.

DB: You left the PiPress after the MediaNews takeover. Now that you’ve worked in the international media for several years, has that changed how you view the trouble many U.S. papers find themselves in?

BB: I read with avid interest as much as I can find on the state and trends of American media — Romenesko, Braublog, Ken Doctor’s Newsonomics, David Carr, etc. I still think it’s tough and, as far as I can tell from here, nobody has found the sure-fire way out of the troubles. Google has talked about steps to help boost newspapers, but I don’t really know what they have in mind. We would like to know.

Fortunately, Ukrainians still have a habit of reading the printed newspaper, but in 3-5 years, more and more will prefer to go online.

Our situation is good for now, since we have an owner willing to invest and accept short-term losses. But if we don’t find a way to become a profitable news & services online source, we’ll be in trouble.

Depending on the good graces and long-term benevolence of an owner is a dangerous way to fly. The owner wants to know when it will pay off as a business investment. We are still a very small operation and have to figure out everything for ourselves — how to design the website, how to grow and monetize the traffic, what partnerships to form, etc.

I am not happy about what has happened to the Pioneer Press or the Star Tribune since I left Minnesota in 2007, (even more so since I missed two buyouts at the PP in the same year!). But I do hope and believe both newspapers will survive somehow. 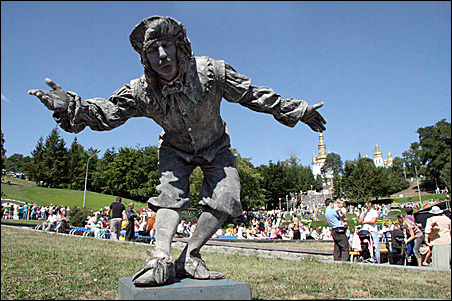 DB:  Give me a sense of what your life is like there. Demi-celebrity and embassy parties? Or a small apartment and nothing but work? Something in-between? The life of a foreign journalist when the foreigner isn’t doing journalism.

BB: Definitely not a demi-celebrity.

In the first few years after the collapse of the Soviet Union, Westerners were treated as a great novelty and given special status. Those days are long gone. Now, to have lots of Ukrainian friends, you’d better learn some Ukrainian or Russian; most in the nation are not going to speak English anytime soon nor do many want to; so I can do much better on that score by studying more.

I am spoiled because almost everyone I work with speaks English and has been abroad. As an editor, I get invited to embassy parties and social events all the time — almost every day. Regrettably, I have to turn many of them down and actually stay in the office and edit. I love editing, but I definitely belong to the class of editors who would benefit by getting out more.

We are launching new projects and upgrades all the time — went through crisis, then recovered; ownership change, expansion, upcoming launch of new local language version, changing offices twice) … takes a lot of time — so the answer is closer to: small apartment and nothing but work (almost), but all worth it when you are part of a great team building a newspaper.

Not all work, though. Ukraine is a wonderful place, and there’s always something happening in Kyiv, so life is never boring. I have been here long enough that it is a comfortable place for me to live. I know a lot of people now. The days go by faster here than anywhere else I have been, so I know I am enjoying it. 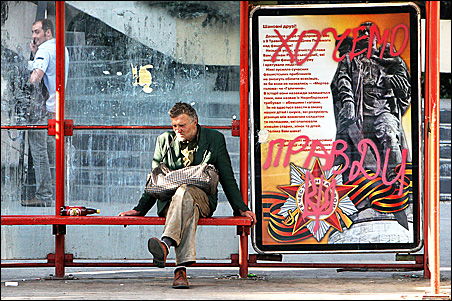 BB: Both are small towns with distinct neighborhoods and heavily influenced by the presence of government. After that, comparisons don’t come easy. Kyiv is 2.7 million people living on top of each other in high-rise apartments with little green space … and you know how this differs with St. Paul, where 270,000 people are spread out.

On Kyiv, you know you can feel it’s an ancient city — more than 1,000 years old — on almost every street corner. It’s great.

DB: Do you plan on staying there, returning here or moving to another foreign outpost?

BB: I probably will go back to Minnesota eventually. You only have one home, and for me, Minnesota is it. I kept my Maplewood town home. A lot depends on personal circumstances — my parents in Eau Claire, Wisconsin, are retired, so I would like to be closer to them and keeping an eye out for suitable job opportunities. I have four brothers, two in the Twin Cities area. (By the way, I was married to a Ukrainian woman; now divorced; no kids.)

I also want to continue the adventure of foreign travel. Most every major city in Europe and Asia has an English-language newspaper, so there are possibilities there. … It can happen if you travel light.