Was snoozing a bit and missed the release of the May Arbitrons last week, which featured a milestone: KDWB topping the ratings for the first time in the 13-month Portable People Meter era.

A year ago, KDWB (home of Dave Ryan and drunken boat parties) was fourth place in the market, behind Tom Barnard’s station, country rocker K102, and KS95. But since then, KDWB has steadily risen while KQ has inconsistently dropped. Here’s a visual: 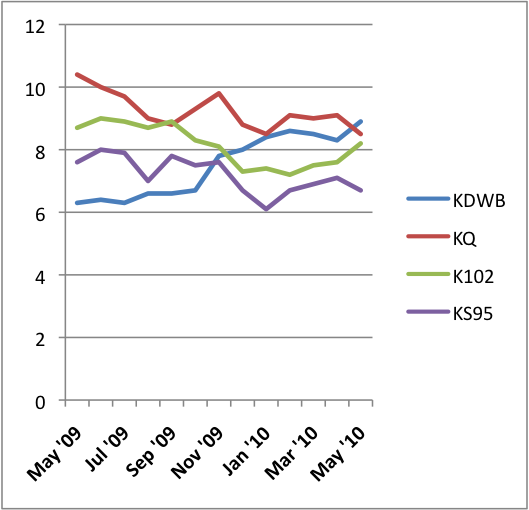 Digging into the numbers just a bit:

KDWB has long led the league among listeners 18-34, but has stretched that advantage massively. Its share has risen since January, besting second-place 93X by almost 50 percent, and nearly doubling third-place KS95. (All numbers are 6 a.m. to midnight, by the way.) The May jump looks exceptional, so we’ll see in June.

In the past year, top-ranked KQ has seen erosion among 25-54s, though it’s stabilized in the last several months. KDWB and 93X, which rank fourth and fifth, have enjoyed some growth here. 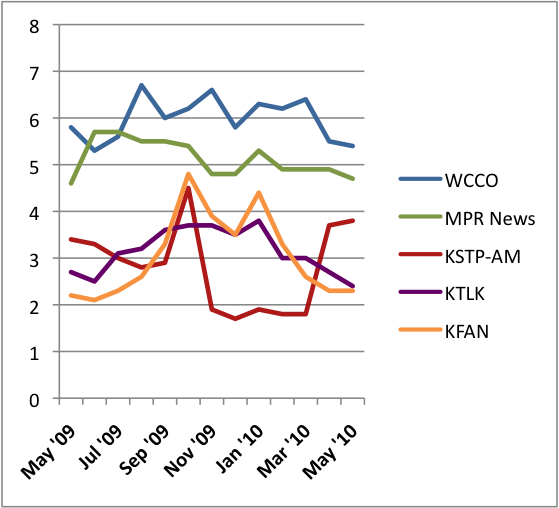 KFAN and 1500ESPN (a.k.a. KSTP-AM) do a little dance depending on whether the Vikings or Twins are playing. ESPN 1500 is enjoying somewhat higher numbers than a year ago, but the Twins get the lion’s share of the credit. Still, the format switch definitely hasn’t hurt.

For all WCCO’s host changes — to younger yakkers like Michele Tafoya, Chad Hartman and T.D. Mischke — the Good Neighbor doesn’t appear to have moved the needle much yet among 25-54-year-olds. (Still, it’s early.) The news/talk/sports stations are all grouped between 11th and 16th place.

In the needs-watching category, MPR News (KNOW-FM) has shown a pretty steady erosion among 25/54s, and KTLK saw a May plunge. Are the Twins or the political climate to blame?

I don’t have specific dayparts — yet — so can’t tell you how individual shows or meatier parts of the day are faring.

Other numbers of note:

KTIS-FM just keeps marching its Christian soldiers up the radio rankings: its 4.3 percent share among all listeners is the highest of the PPM era. KHTC’s switch from B96 is still paying dividends; it also set a PPM high and its share among listeners 18-34 grew by more than 30 percent since January, leapfrogging K102 and KQ in the process.

I always keep a candle lit for The Current. Its share among 18-34-year-olds fell by nearly half between January and May; 25-54-year-old numbers are off too. Ratings aren’t quite as important for MPR’s new-audience entry point, but still, ungood.