Haven’t done a look at radio ratings in a few months, but with AM1500’s big sports-format switch to 1500 ESPN, it’s time to see if there’s any early ratings bump.

As you can see from the spaghetti chart below, 1500 ESPN (second black line) took a big jump-up between March and April, from a 1.8 percent share of the total listening audience to 3.7 percent. That’s not so newsworthy; since the station got Twins broadcast rights in 2007, that leap happens every spring.

The 3.7 tops last year’s 3.3, and this April is KSTP-AM’s best month of the 13-month Portable People Meter era, save for last October when the Twins were in the playoffs. The improved 2010 results is likely explained by the Twins, not the new sports format, since Target Field’s opening has created playoff-level interest.

Plunging into actual dayparts and demographics (adults 25-to-54, the ones advertisers target): The Mike-&-Mike share is off a quarter from a year earlier, when Reusse held down the slot, while ESPN’s Colin Cowherd is roughly matching the numbers put up by the ignominious Prebil & Murphy. That’s not a shock — many expected the national shows would suck wind for local sports junkies. At least KSTP doesn’t pay the host’s salaries (it gives ESPN some commercial spots as payment).

Before we pronounce the Curmudgeon Crew a hit though, there’s this huge caveat: in the 14 weekdays since the April 12 switch, the Twins played five day games in the noon to 6 p.m. hours, compared to only one last year. That makes it highly likely the Twins, not the sportswriters, are propelling the growth. There are fewer day games the rest of the spring and summer, so future ratings books will tell the tale.

KSTP V.P. Dan Seeman is playing it cautious, crediting both the Twins and his station’s blizzard of billboards (Block E looks like Block ESPN) along with his talent: “It’s early but we are very pleased with the launch of 1500 ESPN. The excitement surrounding the Twins and a new stadium, along with the a new on-air line-up and an aggressive marketing campaign have accounted for major ratings increases from April 2009 to April 2010.”

By the way, whatever KSTP is gaining doesn’t seem to be coming from sports rival KFAN’s hide. The Fan’s April-to-April shares among all listeners, 6 a.m. to midnight, was virtually flat: 2.4 percent versus 2.3 percent.

KFAN exec Gregg Swedberg declined comment on his rebooted competitor, noting only, “KFAN’s ratings are about where they were a year ago.”

Anything else interesting in the April book? KDWB has settled in as the overall number two, eclipsing the K102 country folk. WCCO-AM’s April overal share slumped toward the low end of its 13-month range (5.5) amid major personnel turnover. Christian statio KTIS-FM again touched its 13-month high (4.1) while KHTC-FM (4.0) continued to post solid gains since last year’s switch from B96. Oldies station Love105 (3.7) has been a steady gainer, while The Current (1.5) is at the bottom of its range. 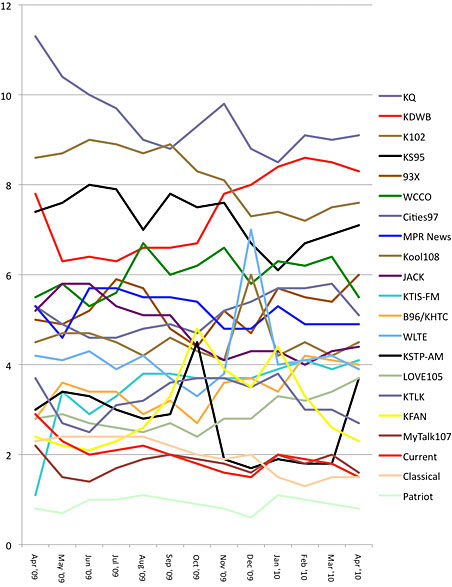