The June Arbitron ratings are in, and for the third month, we have a new champ. But the real story may be the slipping of a titleholder who’s reigned for a quarter century.

In April, KQRS had the biggest share of listeners age 6 and older; in May, for the first time ever, Dave Ryan’s KDWB took the crown. In June, it’s country station K102.

Country topped the charts in September 2009, so this isn’t unprecedented. But KQ hasn’t been in third during the 15-month Portable People Meter era.

Keep in mind, no commercial radio station sells the “6+” number; advertisers are still looking 25-54. But there’s a certain bragging right that comes with more folks listening to you than the other host.

This is where WCCO morning guy Dave Lee comes in. I wasn’t aware of this until recently, but since the final 2009 ratings book, Lee and the WCCO Morning News has been beating the legendary Tom Barnard and the KQRS Morning Show among all listeners.

If not quite seismic, it still underscores KQ’s PPM falloff. Tommy B used to win nearly all the key demos, and any radio executive would give their left gonad to have the Morning Show’s current strength in 25-54. There, KQ still tops KDWB nearly two to one. However, it used to be four to one.

As Ryan claims more of the younger end, Lee and WCCO grabbed the total-audience crown by winning nearly a third of the 55-plus set. (Lee owes Ryan a thank-you card, and overall, WCCO shouldn’t get too giddy: the June number was the lowest of the PPM era.)

There is a certain seasonality to radio, and ratings now come monthly rather than quarterly, so it’s wise to remember the long view. Here’s the 13-month share trend for the perennial top four: 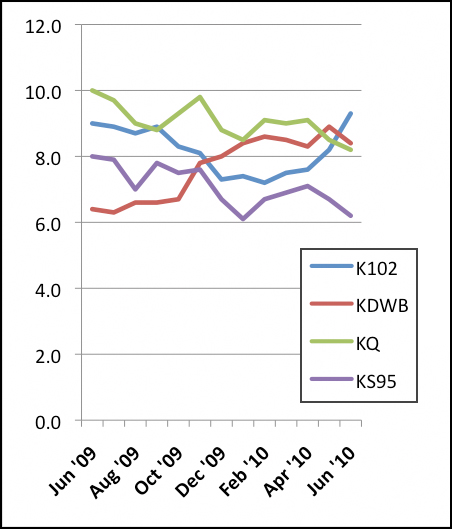 Meanwhile, elsewhere on the dial, 1500ESPN’s overall rating fell a bit with the Twins’ fortunes, and is just a tenth of a point higher than last June. But in general, all the major talkers are slumping, as you can see from this graph: 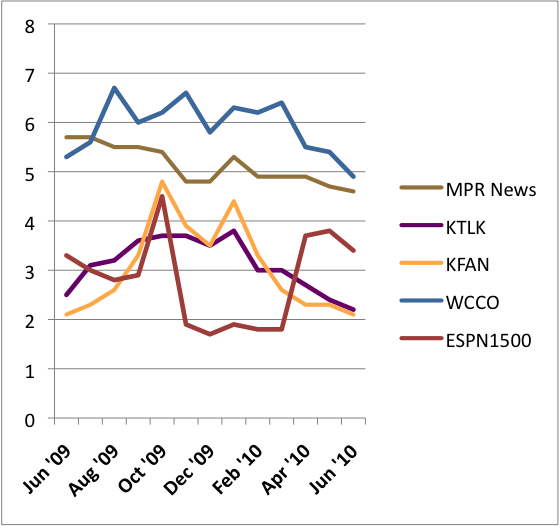