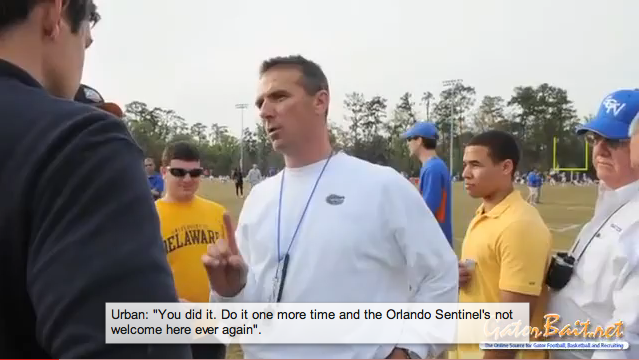 On Thursday, the Pioneer Press announced its new Vikings beat reporter: the Orlando Sentinel’s Jeremy Fowler. I don’t yet know the man, but there are two things to really like about this news.

First, Fowler — who covered college football’s Florida Gators — is the first outside reporting hire the PiPress has made since February 2008. The paper has suffered many departures in the past two years, so it’s great that editor Thom Fladung gets to make a hire rather than once again managing attrition.

Second, Fowler’s got spunk! He managed to piss off one of college football’s most arrogant head coaches and lived to tell the tale.

You may recall an incident this spring when Gator boss Urban Meyer freaked out over a quote from wide receiver Deonte Thompson. Thompson was asked for his thoughts about new Gator quarterback John Brantley, Gator icon Tim Tebow’s successor.

“You never know with Tim,” Thompson said. “You can bolt, you think he’s running but he’ll come up and pass it to you. You just have to be ready at all times. With Brantley, everything’s with rhythm, time. You know what I mean, a real quarterback.”

With Tebow’s pro skills questioned heading into the NFL draft, Meyer decided some flipping out was in order. So he chose a sportswriter who reported the quote. You guessed it: Fowler.

You think Judd Zulgad has it rough over the Favre retirement story? Try pissing off one Florida deity with a less-than-worshipful quote about another Florida deity. You can imagine how Florida fanatics reacted over that.

Here’s Fowler’s take, which includes a transcript and an awesome video.

“You’ll be out of practice — you understand that? — if you do that again,” said Meyer, while a couple of spectators still sat in the stands. “I told you five years ago: Don’t mess with our players. Don’t do it. You did it. You do it one more time and the Orlando Sentinel’s not welcome here ever again. Is that clear? It’s yes or no.” (finger pointing toward the face)

There’s more, such as the coach intimating he’d fight Fowler if he was Tebow’s old man. The next day, Meyer apologized. Go get ’em, Jeremy!

We still don’t know for sure if Brett Favre is coming back, but we know who will be taking the lead in writing about him if he does this season.

We have a new Vikings beat reporter.

His name is Jeremy Fowler, and he has covered the University of Florida football and basketball teams for the Orlando Sentinel since 2008. Jeremy is one of roughly eight beat reporters who regularly covers the Gators — one of the highest-profile college beats in the country — but he is widely considered the primary source for breaking news on the beat. Not only is he prolific in the paper, Jeremy has a highly popular blog (Swamp Things) and Twitter account (osgators)

He knows all about covering an elite quarterback, after years following everything that is Tim Tebow. There’s also that Harvin fellow, who used to catch Tebow’s passes and now catches Favre’s.

Before covering the Gators, Jeremy covered golf for the Sentinel, so he has a few Tiger Woods stories of his own.

Jeremy worked at the Albuquerque Tribune from 2004 to 2007, covering everything from high school sports to the University of New Mexico basketball team. Before that, he graduated from the University of Florida, so I’m sure he’ll appreciate everyone telling him just how cold it gets out here.

His tentative start date is Aug. 23.