The August radio ratings are out and it’s a mixed bag for Minnesota Public Radio. Among all listeners 6 a.m. to midnight, The Current surged to its highest share (2.3) since May 2009. However, MPR News again drifted lower, its fourth straight monthly decline and its lowest of the 17-month Portable People Meter era (4.3).

On the commercial side, KS95 made a little of the wrong kind of noise, falling to fifth place for the first time ever during PPMs. The new number four? The 93X headbangers, whose 5.9 bested KS95’s 5.8. Within the past year, KS has lead 93X by as many as three full share points. 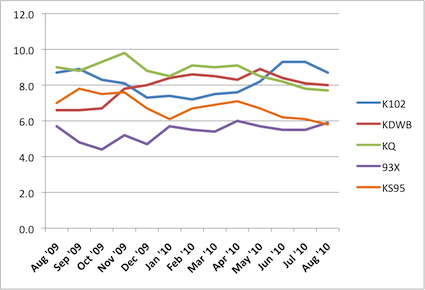 Meanwhile, 1500 ESPN produced a number (4.3) not seen since the Twins were in the playoffs last October (4.5). This is the biggest share since Soucheray’s and Reusse’s outfit became a full-on sports station.

However, 1500’s gain doesn’t appear to be coming from KFAN’s hide; the Vikings station posted a number (2.5) nearly identical to a year ago. (KFAN’s share peaks from October to January when Vikings season is in full swing.)

WCCO slumped to its second-lowest PPM month (5.0) after a July surge, a cautionary tale about making too much of a single ratings period as opposed to longer trends. 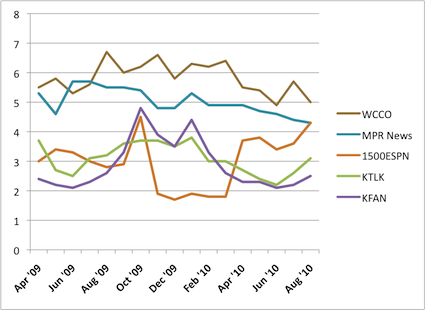 The usual disclaimer: these are Arbitron’s only publicly released numbers, and they don’t measure the 18-49 or 25-54 demographic that profit-seeking programmers focus on. (I chew through those every three months or so.) However, they best show what the Twin Cities is listening to.

Other trends of note:

KQ (7.7) shows no signs of pulling out of its long-term decline, down for the fourth month in a row and again hitting a new PPM low.

Christian station KTIS, a ratings riser for most of the PPM era, posted its lowest 2010 number (3.8).

For a bit of history, here at the most recent numbers compared to those a year ago (talk stations in blue, MPR’s in green). They show, for example, that The Current has only regained ground it’s lost in the past year. Then again, it’s above the 1-something share the station has claimed since last October: