Just weeks after the exodus of reporter Scott Goldberg, KARE-11 colleague Joe Fryer is leaving for a job at Seattle’s KING-TV. His last day will be Oct. 19 and will start his new position Nov. 1.

Fryer, a six-year KARE vet, took home a regional “best reporter” Emmy in 2009 and has won four national Emmys, including one for writing.

He says his contract was up and “I was just looking for an opportunity.” A former KARE photographer working at KING, Scott Jensen, made the connection last winter.

Fryer’s new boss will be Mark Ginther, a familiar name to local newsies. Ginther was a former exec at KSTP and KFAN, and also worked at WCCO. (Disclosure: former boss of mine.)

Fryer says KING is “staffing up, adding new photographers and was looking for reporters who are good storytellers.” 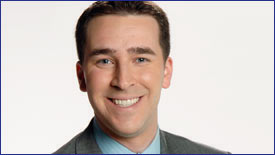 The Gannett-owned KARE, in contrast, has lost or laid off some top names in the past year and a half, including anchor/reporter Rick Kupchella and managing editor Lonnie Hartley during 2009’s advertising meltdown. The station has cut back on technical personnel and has been more aggressive than some competitors in training “backpack journalists,” reporters who shoot their own stories.

None of this is unique to KARE, but it does represent a big change for long-timers at a station traditionally in the catbird seat when it comes to ratings.

Asked if KARE’s changes were a factor in his departure, Fryer says, “I’m not going to say that, no. Ultimately, it was just the opportunity at KING. It was not an easy choice.”