Joe Eskola acknowledges concern: “By no means are we panicking, but we are watching things.”

News is off 23 percent, The Current is down 14 percent, and Classical has declined a whopping 38 percent in the broadest measure of listenership (people 6 or older, 6 a.m. to midnight).

The arc and velocity of each fade is different.

The Current numbers fell off the table in fall and again this spring, but have rebounded to 1.8 percent of the listening audience as temperatures warmed. Classical hit bottom in February but has been around 1.5 for the last five months.

The News slippage has been more gradual but more consistent — its last two months (4.6, 4.4) were the lowest since a new measuring technology, portable people meters (PPM), replaced listener diaries in April 2009.

Madness in the methodology?
To some extent, MPR’s troubles reflect national trends. PPMs, which are wearable and pick up ambient music whether the listener is listening or not, have tended to favor big music stations; talk and classical stations have seen numbers fall across the country. 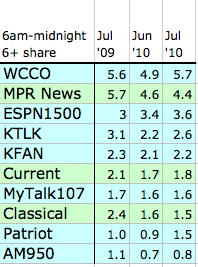 Locally, though, MPR News has seen a bigger slide in the past year than several non-music competitors (see chart at left).

WCCO-AM is up a bit July-to-July, as is sports station ESPN 1500 and right-wing talker The Patriot. KFAN and women-talker My107 are flat, while right station KTLK and lefty counterpart AM950 have also dropped.

It’s important to note that even though MPR’s share of the listening audience has dropped, that doesn’t mean fewer people are listening. Eskola says between the three MPR stations, the total number of people tuning in — known in the ratings trade as “cume” — is up. The Current has seen its cume rise the most, while News is up modestly and Classical is more or less flat.

However, cume has risen for almost all stations in the PPM era; meanwhile, the other ratings component — “time spent listening,” or TSL — has dropped. This is likely because the meters pick up more channel-changing than people remembered to put in their diaries. MPR’s problem is that its cume-TSL combo hasn’t kept pace with the rest of the market’s.

Like for-profit radio execs, Eskola worries that Arbitron’s “jury” system — roughly 1300 people metering for 13 weeks with far less turnover than the old diary method — may not have all the kinks worked out. Early on, minorities complained about underrepresentation, and locally, there were big gyrations in the first couple of PPM months.

During the 16-month PPM era, Eskola has seen some big shifts — The Current’s 35-to-44-year-old listenership shrinking dramatically, and then “popping back up” in March; at Classical, “the 65-plus crowd cut in half” — that make him wonder about methodology.

Still, Eskola says, “I don’t want this to be, ‘MPR sees crummy numbers, blames it all on Arbitron.’ Do we feel concern? Yes. Are we treading carefully? Yes. We have started to dig in more, but there’s no major ‘Holy Cow, batten-down-the-hatches’ changes to news because we had low numbers in July.”

The News blues
Eskola says the news numbers are down across the board. It’s not a case of one show — “I kind of wish it was,” he quips — though the falloff is “a little” bigger in the mid-day block (9 a.m. to 3 p.m.) compared to drive-time.

The News-side decline is more alarming considering 2009 wasn’t an election year, but 2010 is. That would seem to indicate numbers should be rising. Eskola says his research shows non-presidential election years don’t produce a ratings bump until September or October, and then only at about half of the presidential-year rise of 20 percent.

This is also the first year since 1998 that a governor’s race stands alone. “The governor’s race is intriguing, and it might capture the imagination, but it hasn’t kicked in as much,” Eskola notes.

The music-side slide
What about The Current? Here, Eskola has a theory, and it doesn’t revolve around the quality of the music. (I regularly get emails lamenting the station’s turn toward the mainstream, something I’m not qualified to judge.)

Instead, he sees an increase in “sharing” (listeners who flit among two or more stations) between The Current and sports stations KFAN and KSTP-AM (now 1500 ESPN). “Having the Twins and Vikings as newsworthy at all is definitively pulling numbers away,” he says of the young-skewing audience.

Classical’s drop is another mystery: programming hasn’t changed, and the “cume” — the total audience listening — has remained where it was during the past decade of the dairy era: 200,000 people, plus or minus.

The audience is aging, though — Eskola says the average listener is now in the upper 50s, a decade older than the News audience, and nearly three decades older than The Current. Eskola says the graying listenership is mostly due to the aging of the Baby Boomers.

What’s being done
As I noted Monday, MPR depends less on ratings than commercial stations. Membership, a bastion of public-radio support, has never been higher, topping 100,000 people. But Eskola says ratings do affect income from MPR’s sponsorships.

When it comes to dramatic changes, Eskola says he is preaching caution. PPM isn’t more than a year old, and 2010 is its first full year. “If there are seasons and cycles, we feel like we only have one data point, and we’re at the start of Year Two,” he notes.

While there are no doubt tweaks being explored for each station’s programming day — various teasers and tweaks to keep listeners listening longer — Eskola says there’s probably more to gain by getting more people to listen. That would imply a marketing challenge more than a programming challenge.

However, for a 40-year-old network that is public radio’s biggest by far, how many more listeners are there, and how much longer before bigger programming changes are considered?