The September book covers Aug. 19-Sept. 15, so summer listening is fading out of the numbers. As always, these are the broadest audience numbers (ages 6 and over, 6 a.m. to midnight), which captures what everyone in the Twin Cities is listening to, not where advertisers are focused.

For a month, anyway, MPR News didn’t go down (4.3) and the music side did relatively well. The Current (2.2) held its August gains, and Classical (2.0) scored its biggest number since December. Theoretically, MPR News should tick up in the next couple of books as election season peaks.

Here’s the top of the charts: 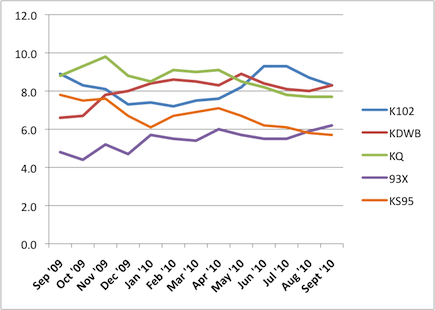 On the talk side, the big story continues to be 1500 ESPN, which posted a 4.5 off Twins broadcasts, up from a 2.9 a year ago. The Twins were steaming toward the playoffs both years, but the station hadn’t yet gone all-sports in 2009.

(By the way, it may not be entirely fair to call the former KSTP-AM all sports now. Since his ratings surged post-switch, Joe Soucheray has drifted back to conserva-talk after a nod to more sports in the spring. Tuning in before a Yankees playoff game, it bummed this Twins fan to hear a Vince Flynn interview on the team’s station.)

KFAN (2.9) has begun its Vikings-season rise. The station’s top-line number is off a bit from a year earlier (3.3). WCCO is still at the top of the talk heap (4.9) but still fading. 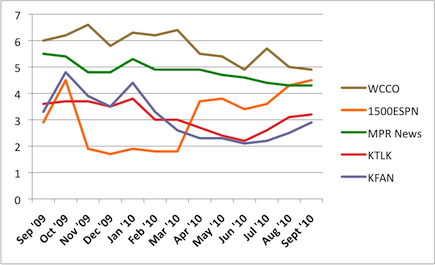 I usually don’t report “Cume,” which is Arbitron’s measure of the total number of people listening, but it’s sometimes fun to talk about. A station’s share is cume times how long people listen. Here are some September numbers for the Twin Cities market:

K102 is this month’s ratings co-champ, not because the most people listen, but because country fans listen longer. Meanwhile, the robo-DJ stations like WLTE and JACK score high cumes, but are penalized because they don’t hold listeners as long.

On the talk side, the ratings champs aren’t necessarily the cume champs, either. MPR and WCCO listeners tend to stick around longer: