Once again wading into the thicket of web metrics, here’s Braublog’s second local-media website Top 20, covering all but three days of November. The rankings, compiled by Experian Hitwise, are designed to tease out the share of local audience looking at a universe of 50 local media sites, a bit like radio and TV rankings.

Frankly, there’s not much change from the September data: the Star Tribune still dominates visits, with 40 percent of the local media market. WCCO doesn’t appear to have been hurt by installing the minnesota.cbslocal.com domain over wcco.com and wccoradio.com; it still finished second.

The percentages get pretty tiny once you get past the newspaper and TV sites, but MyFox9, MPR, 93X, City Pages, MinnPost and MyTalk107 grew. K102 appears on the chart for the first time because, frankly, I forgot to include them in the original data set. 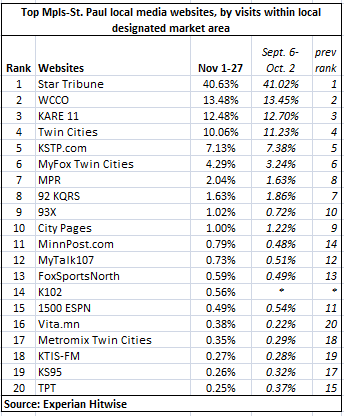 Visits was chosen because it bleeds out certain tricks, like running stories across multiple pages to goose page views. However, it doesn’t measure things such as time spent on-site, repeat visits (a metric MinnPost favors) or non-local traffic, which can also be monetized. It also doesn’t include social-networking traffic; for example, to a site’s Facebook page.

Also important to note: Experian Hitwise buys data directly from Internet Service Providers, but it may not buy from every ISP out there. The Mpls-St. Paul DMA includes two-thirds of Minnesota and seven Wisconsin counties.

There are a jillion other web metrics out there, and to cross-check these numbers, I pulled in similar data from Quantcast.

Quantcast directly measures a site’s traffic, should the site embed Quantcast’s code. Seven sites on the Local Top 20 do, including the Star Tribune, Twincities.com (aka the Pioneer Press), City Pages and MinnPost.

Not every site puts Quantcast’s code on every page, and the Quantcast numbers don’t segregate local DMA data. By they do provide a site’s total visits, something Experian Hitwise doesn’t.

The chart below also compares a site’s visit as a share of the Star Tribune’s, by Hitwise and Quantcast measures: 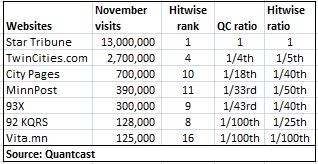 You can see City Pages performs better under Quantcast than Experian Hitwise; could be flaws in the data, or that City Pages does a better job, relatively, of grabbing non-local visits.

Since I know MinnPost’s actual visitor count for November according to Google Analytics — 492,000 — I can tell you Quantcast’s number for us is low. But the chips may fall that way for everyone else

Here were the other sites I asked Experian Hitwise to check: