November not only brought good news for Republicans, but for their local media cheerleaders. Meanwhile, what’s the problem with KS95?

The November Arbitrons showed big one-month jumps for K-Talk (from a 3.1 to 3.6 percent share of the Twin Cities listening audience 6 or older, 6 a.m. to midnight) and The Patriot (0.9 to 1.3). Everybody loves an electoral winner, I guess, even if that guv’s race probably didn’t go the right way.

Meanwhile, it was a rough month for Hubbard Broadcasting.

KS95 — a perennial Top 4 station in this market — fell to seventh with a 5.3 share. As recently as April, KS95 had a 7.1 share; this was the station’s seventh straight monthly decline.

Hubbard’s sports station, 1500 ESPN, plunged from a 4.1 to 2.4, but that’s to be expected now that the Twins season is over. The local ESPN flagship’s number is 0.5 above last November, before it was rebranded as all-sports.

Here’s the market’s Top 5 and how they track: 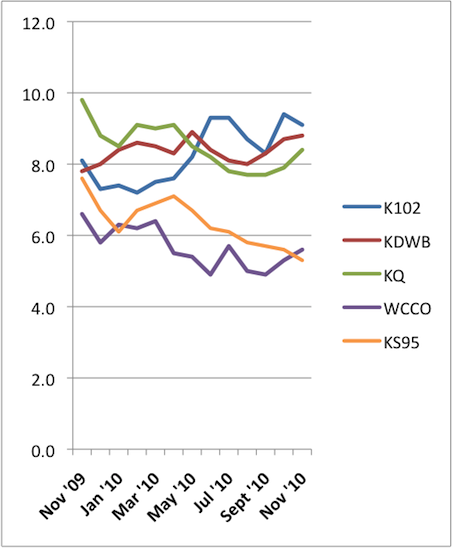 WCCO cracks the Top 4 only by attrition. The Good Neighbor’s number (5.6) is down from a year ago. It’s just that KS95 has plunged, #5 93X is puttering along at recent lows, and #6 KOOL is bouncing within its traditional range.

If we just look at the talk stations, you can see KFAN and 1500 do their annual do-se-do: 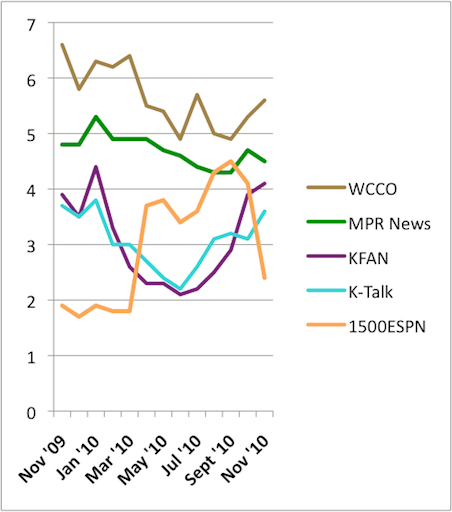 Though KFAN surges during Vikings season and 1500 falls when the Twins bow out of the playoffs, both stations are above their year-earlier number. You can also see some seasonality for K-Talk, perhaps indicating their listenership tunes into the Twins and 1500, but then bounces back to conserva-yakking in the dark winter months.

Here’s the Top 25 chart, with some random observations:

MPR News (4.5) fell off just a bit from October’s 4.7, perhaps because the election is over. The station is still tracking below last year’s numbers, but within a fairly narrow band since this summer.

The Current (2.0) is flat, but this is its fourth straight month in the 2s, numbers not seen in over a year.

KQ (8.4) had a nice little gain after four months in the 7s. Still, Tommy B’s home was in the 9s as recently as April. There might be a Twins bump here, too.

Not to overlook the big winner: For the sixth month in a row, Country K102 finished atop the ratings.