Cullen Sheehan knows it will sound like sour grapes. The gubernatorial candidate he managed, Tom Emmer, narrowly lost the governor’s race. To criticize pollsters after the election seem like the losing candidate and campaign were blameless.

“That’s not what I’m saying,” Sheehan insists over coffee at Sweetwater’s, the dank watering hole a stone’s throw from the state Capitol.

Sheehan agreed to share internal poll numbers to help illustrate how things looked from the inside of a campaign. (See table, end of story.)

Between Oct. 24 and Oct. 28 — just before the Nov. 2 election — Emmer forces were buffeted by what Sheehan calls a “triple whammy.” First, the Star Tribune showed Emmer down 7. Then St. Cloud State had Emmer down 10. Finally, Minnesota Public Radio said Emmer trailed by 12.

As we know now, Emmer wound up losing by 0.4 percent — roughly 9,000 votes. Although two polls released after MPR’s showed a nail-biter, Sheehan contends the lousy numbers came out at precisely the wrong time.

“At that point, undecided voters are making up their minds and supporters are getting anxious, having seen 7 down, 10 down and 12 down,” Sheehan says. “It impacts fundraising and volunteers. It’s definitely not the only factor, but it is a factor.”

Says Sheehan, “The point I am making is that outside public polls have an impact on campaigns — ultimately, some impact on eventual outcome of campaigns, especially in close races.”

At least one media outlet agreed even before the results were known. This year, the Star Tribune declined to do its traditional final-weekend poll. A key reason, editor Nancy Barnes told me, is that “a poll can sometimes influence the outcome of an election.”

Sheehan’s plea? Withhold questionable numbers. “I’m under no illusion that public polls will cease, but I do think news organizations have a responsibility to ask themselves, when they get their results, if they really believe they’re accurate,” he says.

Trailing badly, then tied
Emmer’s internal numbers aren’t holy. Except for Election Day, no one really knows where the public stood at any given time. The campaign numbers are just another data point to add to the trends. 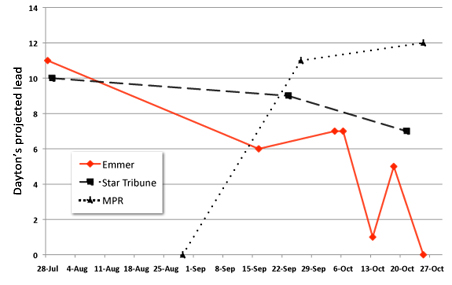 Poll trends of Dayton’s reported lead during the 2010 campaign season.

The Emmer pollster, Public Opinion Strategies, sampled 500 voters over a two- or three-day period using landlines and live operators. In other words, it isn’t a robo-poll, and missed so-called cell-phone-only voters.

Although “internal numbers” often become propagandistic leaks, Sheehan insists the data was not for public pre-election consumption. Though he wound up releasing the most favorable result during the campaign, it proved prescient, and two independent pollsters subsequently showed similar results.

“It really is, internally, a compass,” Sheehan says of the campaign’s polling.

In the wake of the double-digit gap, Sheehan took over as campaign manager. But by early October, the internal numbers had barely budged: Emmer was still down 7. A Strib survey taken a week or so earlier showed the Republican down 9 — again, pretty close to what the campaign was seeing.

Finally, on Oct. 13, Emmer got his first great inside news: he was only down 1. But the next media poll (SurveyUSA/KSTP) had him down 5, and an Oct. 18 internal poll repeated that number. It was two weeks before Election Day.

“We didn’t know what to think for certain,” Sheehan says. He assumed that the campaign’s closer Oct. 13 poll was the outlier, perhaps due to the voter sample, or being on the favorable side of the sampling error margin.

Crunched by the numbers
A 5-point gap isn’t horrific, especially if it’s trending down. Emmer’s mid-October numbers (and ultimately, everyone’s) showed Independence Party nominee Tom Horner had peaked; Horner, an ex-Republican, was believed to take more from Emmer than Dayton.

Then came the polling “triple whammy.”

Again, the Strib’s number was a chip shot from Emmer’s own — but trending in the wrong direction for the campaign. Says Sheehan, “We started thinking, ‘Is this the Strib, or are we sinking?’”

At that point, Sheehan wasn’t too worried about donors or volunteers walking the plank. Even though the Strib switched pollsters before the 2008 election and its numbers followed Emmer’s internal arc, enduring GOP suspicions meant that “from a Republican perspective, they are easier to knock down,” Sheehan says.

The next day, St. Cloud State pushed Emmer’s deficits back into double digits: he was down 10.

Though the university measures a host of public attitudes (MinnPost paid for three questions on ranked-choice voting), they are measured over 12 days — far longer than most pollsters.

For the Emmer-Dayton-Horner race, that meant opinions up to two weeks old would be released eight days before the election. Frank notes his poll “works the sample hard” — for example, calling cell phones and calling back hard-to-reach voters. But the result is less a “snapshot in time,” than an HBO mini-series.

Sheehan says that inside the political-media bubble “we pop the credibility of St. Cloud State, but the general public, mainly undecided or uncommitted voter, don’t know the difference.

“People outside were really starting to ask then: ‘What was happening?’ It’s difficult to keep people from believing we’re within reach, because there are now two polls showing it a very uphill climb.”

The next morning — exactly a week before Election Day — Sheehan saw a far better number: zero. For the first time in his tenure, an Emmer internal poll showed the race tied.

The campaign manager did not issue a press statement. “Most campaigns don’t release polls to the media or donors,” he explains. “You might tell five or 10 people — you’re not telling everybody. You’d say, ‘It’s a close race, we have a shot at winning.’ It’s an unwritten rule that you don’t release numbers.”

The campaign “felt good” about the internal result, Sheehan says, “but it had no outside polling support.”

Then, two days later, came the opposite of corroboration: MPR’s poll with Emmer down 12.

“That’s when we knew we were in trouble,” Sheehan says.

Not showing up
So how, exactly, is a campaign hurt?

There are basically three aspects. Undecided voters avoid a losing campaign, volunteers lose motivation, and donors hang onto their wallets.

Emmer is a blunderbuss of a man whose legislative feuds and Tea Party proclivities didn’t help him with several big-money Republicans. Though independent groups spent multiple millions on his behalf, Emmer — more than most GOP candidates — needed to be close to open reluctant wallets for spending he could direct.

“That’s not to say we didn’t have money when we needed it,” Sheehan says, but tough poll numbers made it tougher to raise funds throughout the campaign. By the time the questionable numbers came in, the die was largely cast.

The far bigger late-stage problem was volunteers. In the final days, they make the calls to persuade leaners and march stalwarts to the polls. “One hour of people’s time is as valuable as dollars,” Sheehan says. “There are thousands of slots, three or four shifts a day, hundreds of contacts in the final three to seven days.”

Few campaigns fill all the shifts; Sheehan says 50 to 75 percent of capacity is typical. He estimates that as the bad numbers crested, Emmer callers fell 10 to 20 percent short of that. “It was a problem getting volunteers motivated and believing we could win a close race.”

For the record, DFLers say the positive poll results were no picnic for them.

Dayton campaign spokeswoman Katie Tinucci says a big gap makes the leader’s supporters complacent. The goal of both campaigns is to provide a sense of urgency to turn voters out, she says.

Though I couldn’t pry out the DFL side’s internal data, Tinucci says her side always believed the race was close. Other knowledgeable DFLers I spoke with said the arc of Emmer’s polling sounded pretty similar to their data.

Though Sheehan is convinced the polls turned undecideds from Emmer, St. Cloud State’s Frank isn’t buying it — or that the media should censor results if they are out of step with the prevailing numbers.

“Please show me one credible study that shows people change their mind on the basis of a poll,” Frank says. “Campaign managers like to find excuses rather than looking at their candidate or performance. Do you think if we stopped [publishing results] others would — or the candidates would and the latter won’t go public or only partially public?”

Steven Smith, a Washington University political science professor who has spent considerable time in Minnesota, suggests that polls influence insiders, but it’s tougher to translate their reaction into votes.

Polling results “have become quite visible to the attentive public [contributors],” Smith says, “but a case can be made that they lack visibility among average voters.”

Fighting polls with polls
The paradox of Sheehan’s complaint is that Emmer almost transcended the “bad” numbers. Aside from a fusillade of independent ads, the Emmer campaign fought fire with fire.

The afternoon that MPR released its poll, Sheehan broke the unwritten rule — and didn’t leak to do it. The campaign sent out a press release proclaiming the internal poll’s tie.

“It’s not a decision we made lightly,” he says. “You know most media will not believe it because they didn’t pay for it. But the [MPR] poll was so outrageously wrong, we felt like our hands were tied.”

The campaign didn’t release any other polling data, so it was hard for the media to independently vet the number. Still, any mocking subsided that night when SurveyUSA released a poll showing Emmer down just 1. Two days later — on the Saturday afternoon before the election — the Democrat-affiliated Public Policy Polling released a 2,000-voter survey putting Emmer 3 points down.

And of course, we know what happened on Election Day.

Media introspection
At MPR, the re-examination came after the polls closed. On Nov. 11, MPR and the Humphrey Institute began an independent review of their polling methodology. Was there an error? Why did it happen? We don’t know yet; the review is not finished, according to an MPR spokeswoman.

At St. Cloud State, Frank notes shifting public sentiment and random variation are factors any horse-race poll can’t control. However, he acknowledges, “our poll’s result in the horse-race question was not as close as we would have preferred.”

The fault may have been the poll’s likely voter model — more problematic in lower-turnout elections. “We are examining it in some detail to see if we can improve our predictions of which respondents are likely to vote and which ones are not,” Frank says.

While working to better his survey, Frank is disinclined to withhold any future poll numbers. “We will always release our results to the public as soon as possible after we finish polling,” he declares. “To withhold results from the public would not be true to our purpose, and seems unethical from our point of view.  We would never undertake a statewide poll and then postpone releasing results even though they are ready.” 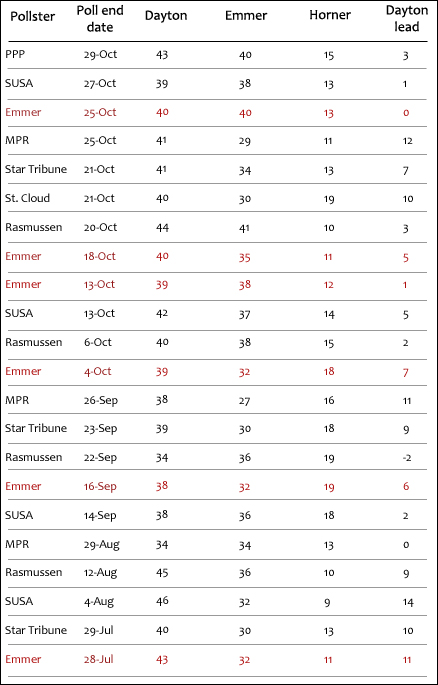 Polling data between July and October 2010.