Pioneer Press photographer/videographer Ben Garvin pointed out a stark difference between his paper’s front page and the Star Tribune’s this morning. It boils down to, “How big do you like your possibly crazy accused mass murderer?”

The Strib opted for a photo of togetherness, with the accused nearly a visual afterthought: 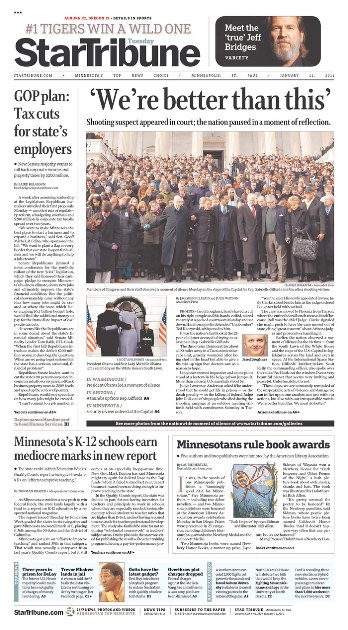 Garvin — who emphasizes he had nothing to do with the PiPress front — knows which one he favors.

“I’m proud to work at a paper that puts the head shot of Loughner on the front page,” he says. “It’s such an extraordinary photo that reveals more about this fellow than anything I’ve read so far.”

He knows people will criticize play-it-big papers for indulging a possible killer’s ego. “Who cares what he thinks?” Garvin asks rhetorically. “We oughta first ask the question, ‘What photo advances the story in a way no other does?’ And today, it’s the portrait of insanity.”

I should note a MinnPost piece quoting an expert cautioning people against concluding Loughner is insane — at least so far.

I’ll admit, I was riveted by the mug shot yesterday. But when I picked up my Strib today, I was moved by a fractious Congress standing together.

Maybe there’s no right answer here — what do you think? Were “big-play” papers indulging in tabloid trash, or staring truth in the face? And were “small-play” papers acting responsibly, or cowardly?

By the way, as big play goes, it’s probably not a shock that the New York Post played the photo as big (and unequivocating) as possible: 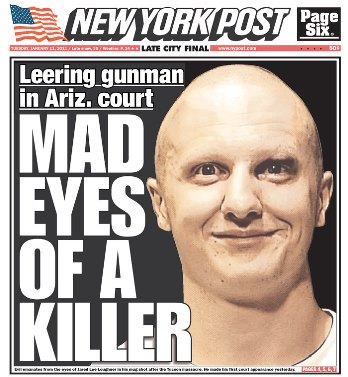 Then again, the New York Times also played it more like the PiPress than the Strib: 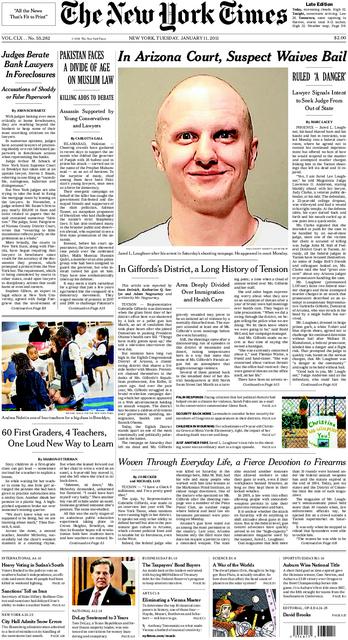