State Rep. Phyllis Kahn makes no bones about it: She wants the Mayo Clinic to release New York Yankees legend Lou Gehrig’s medical records. Monday, she will introduce a bill permitting just that.

This summer, the New York Times published a provocative story suggesting “Lou Gehrig might not have had Lou Gehrig’s disease” (also known as ALS or amyotrophic lateral sclerosis). The theory is that Gehrig’s many concussions caused a similar but different fatal disease.

While medical-media critics had issues with the Times’ linkage, the story captivated Kahn, a Minneapolis DFLer, biology researcher, and unabashed hardball fan. The piece noted that the Mayo Clinic, which treated Gehrig, would not release his records, and forbade a doctor who examined them from being interviewed.

Kahn’s bill would change state law to permit a records release without consent if the patient has been dead at least 50 years; Gehrig passed away in 1941. 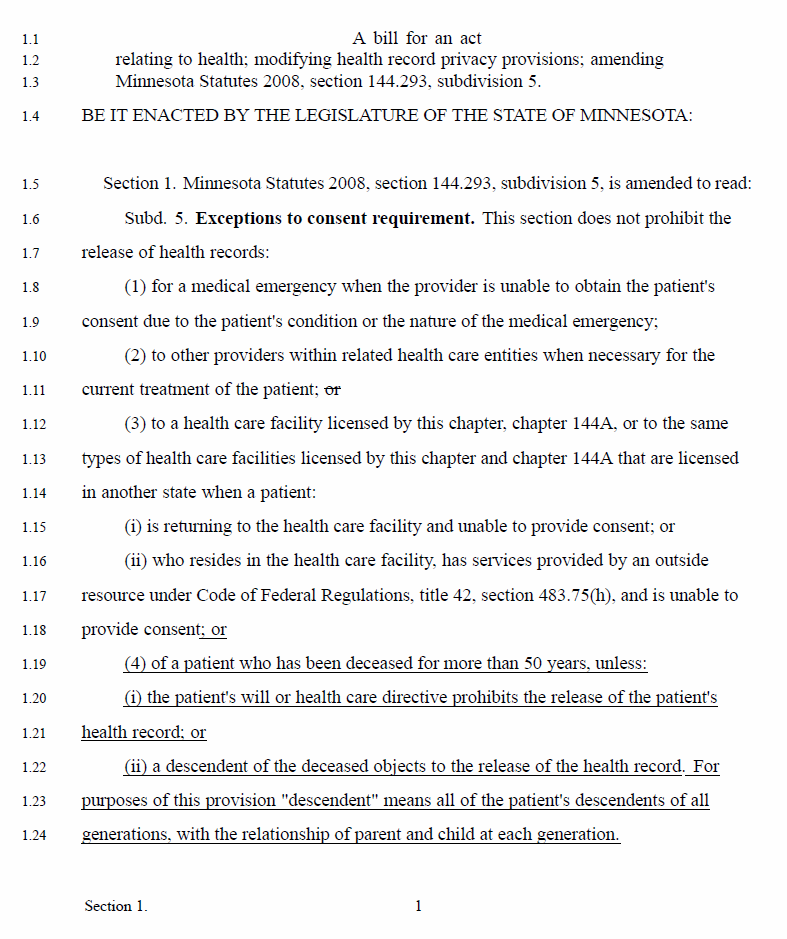 The records could remain sealed if a heath directive prevents it, or if a direct descendant objects. Gehrig died childless, so unless a will gets in the way, the public could have at it.

How does the Mayo Clinic feel about this? A government relations person who was supposed to contact me Thursday didn’t. (I’ll update the story when they do.) As I read the bill (right), it would not compel Mayo to release the records. However, if their current refusal relies on patient consent, the bill would give them the freedom to do so.

[Update: A Mayo spokeswoman says clinic officials are still studying the bill and have “no position at this time.”]

Is Kahn doing this out of a fan’s curiosity or for a larger public policy purpose? “Both,” she replies, noting that her Minnesota proposal mimics federal consent-exemption rules [pdf]. Given that federal proposal was published in July — before the Gehrig story broke — it’s clear the U.S. government sees a broader rationale:

[A]rchivists, biographers and historians have expressed frustration regarding the lack of access to ancient or old records … even when there are likely few remaining individuals concerned with the privacy of such information. …

We believe fifty years is an appropriate time span because by approximately covering the span of two generations we believe it will both protect the privacy interests of most, if not all, living relatives … and it reflects the difficulty of obtaining authorizations from personal representatives as time passes.

Kahn can be something of a gadfly, but in this case, she has three House co-sponsors, including a power in the new GOP majority: Lakeville’s Mary Liz Holberg, the Ways and Means Committee chairwoman.

Grove City Republican Dean Urdahl — who happens to have authored the Minnesota Twins book “Touching Bases With Our Memories” — has also signed on, as has Golden Valley DFLer Ryan Winkler. Kahn says St. Paul DFLer Ellen Anderson will carry the bill in the Senate.

Kahn hopes the bill draws more attention to the importance of treating concussions, even though the likelihood of a link to Gehrig’s demise seems remote.

“I’m a scientist; I like accuracy, and this is about disclosure with proper protection,” she says. “The mystery makes this interesting, but if the records come out and don’t show anything, so be it.”