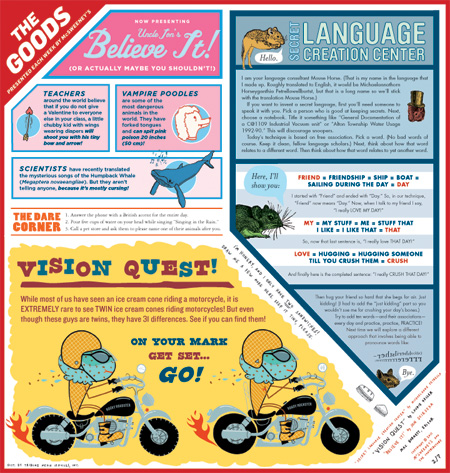 Then the hipsters at McSweeney’s have a full-color feature they want your local newspaper to buy.

McSweeney’s founder Dave Eggers (“A Heartbreaking Work of Staggering Genius”) is a print die-hard who last year brought out a gorgeously realized alt-Sunday paper, Panorama. The newest offering — called “The Goods” — is designed to put irony, absurdism and smart-set goofiness into your stodgy Sunday paper.

One of my big memories as a kid, on Sundays, my dad would peel off the funny pages as he would read the newspaper. I think that trained me to have a certain fondness for the newspaper. I don’t think kids have that now. … I would love for kids 10-20 years from now to have fond memories about The Goods.

OK, so maybe this is the sort of thing that appeals to kids whose parents wear thick black-rimmed glasses. But still — any chance of Beetle Bailey getting a tattooed pagemate here?

Supervising editors at the Star Tribune and Pioneer Press get the joke, but say the joke probably won’t get to readers.

PiPress features editor Amy Nelson says, “I do like it a lot for its appeal to a younger audience, but we’re not adding newshole to our comics right now.”

At the Strib, senior editor Connie Nelson (no relation) says, “I looked at it, I liked it. But it’s a really big change, and I think readers have had a lot of changes. People view change as negative.”

Then again, unchanging newspapers risk riding existing audiences into the sunset. No one claims “The Goods” represents salvation; more like playful experimentation for the creative class too seldom satisfied by newspaper feature sections.

Of course, opinions about comics make opinions about politics look tame. The “Goods” half-page size, combined with rising newsprint costs, means some existing comic has to die. I’d love to see “Bailey” — with Miss Buxley and Miss Blips, haw, haw — expire, but someone out there loves it. I’d love to see my kids fight over the Washington maze, but others will find anything with Abraham SuperLincoln gratingly precious.

Says Connie Nelson, “I hesitate to make any changes in the comics pages right now because this is something that goes to readers’ hearts.”

Ironically, Amy Nelson says one demerit to the McSweeney’s package is that there appears to be no online component … and here Eggers is trying to sustain the print imperative! Connie Nelson says she’s content to wait and see how “The Goods” does in early adopter markets.