The first full Arbitron ratings of 2011 reveals an extremely happy New Year for WCCO-AM and The Current, who achieved their highest numbers of the 22-month Portable People Meter era. Meanwhile, LiteFM — coming off its all-Christmas-music sugar high — posted its second-lowest PPM rating ever.

Seasonality could be a factor, as WCCO’s ratings rose last winter, too, but this year’s January was nearly a share point better than 2010’s 6.3. Could the new host line-up, much altered in 2010, finally be gaining traction? WCCO’s number rose for the fourth month in a row.

The seasons may also explain the plunge for Country K102, the ratings leader as recently as November. K102 also dipped with the thermometer last year.

Here are the market Top Four and how they’ve tracked the past 12 months: 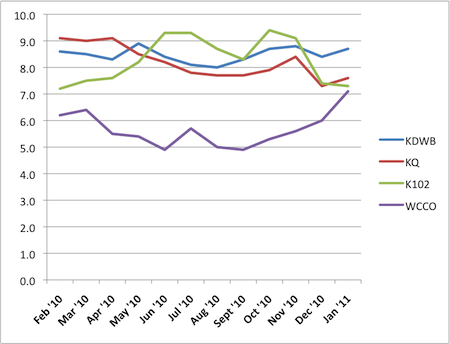 Here’s how the talk stations track: 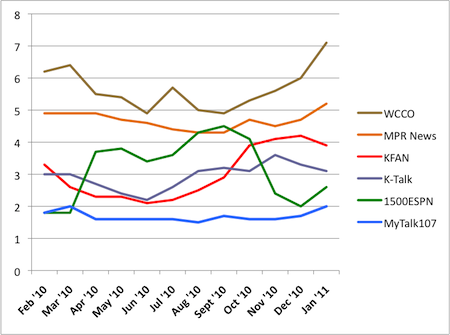 KFAN (3.9) fell with the Vikings season ending, down from last January’s 4.4 — but the Purple’s lousy play helps explain that. Competitor 1500ESPN posted a relatively strong 2.6, up from last year’s 1.9 before the all-sports rebranding.

At the conservative end of the political spectrum, KTLK-FM (3.1) was down from December, as was the Patriot (1.2) though only KTLK dropped from a year ago (3.8).

The biggest loser from December to January was WLTE — plunging from 7.6 to 3.5, depths unseen since October 2009. I ignore Arbitron’s “holiday book,” the four-week period ending Jan. 6, because Christmas music distorts regular ratings. Lite FM begins ringing the “Jingle Bells” early, so it’s the king of the holiday book, but listeners flee once the calendar turns.

Elsewhere, KS95 got a dead-cat bounce from December’s PPM-low 4.6 to January’s 5.2. The adult-contemporary station is still down nearly a full share point from a year ago.

Cities97, whose numbers fell off the table this fall, crept up in January (to 3.8) but remains nearly two full share points down from a year ago (5.7). That’s a headache for owner Clear Channel.

On the oldies side, KOOL108 is up almost a share point from last year, while LOVE105 is down a nearly equal amount.