Arbitron did not wait for my vacation to end before releasing their February ratings, so belatedly, here are the numbers:

The numbers at right represent year-to-year growth; some added charts below will show recent momentum in the broadest listening category, ages 6+, 6 a.m. to midnight. But by any measure, WCCO and Minnesota Public Radio’s The Current have shown extraordinary winter growth.

Let’s start with The Current, the alt-rocker recently savaged by the Star Tribune editorialists. Last spring, it was scraping along with about 1 and a half percent of the Twin Cities’ listening audience, and that number was heading down, hitting a 1.4 bottom last May. The station climbed back to the low 2s by late summer, but in January jumped from a 2.2 to 3.3.

An aberration? If so, it’s now two months long — the Current nailed a 3.6 in February. For context, that’s more than either sports station (which admittedly, are coping with no Twins or Vikings right now) or conservative talker KTLK.

Meanwhile, WCCO racked up its fifth monthly gain, hitting third place in overall listenership for the first time since the Minneapolis-St. Paul market switched from paper diaries to portable people meters in April 2009.

Again, the 6+ category isn’t the one commercial stations target. You can see here that KQ is still a strong performer in the 25-54-year-old male demographic. And competitors will say that our unusually lousy weather has given WCCO a big boost. We’ll find out the truth when summer hits, but here’s the arc of the four biggest Twin Cities stations: 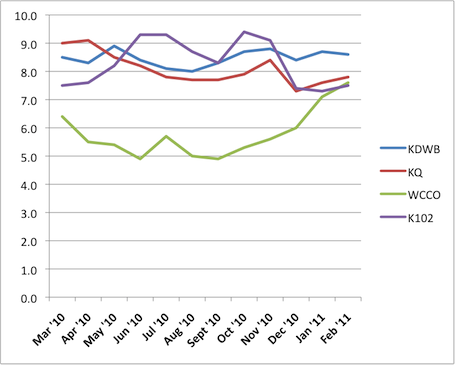 CBS executive Steve Moore says all dayparts are growing. In the 12+ category (almost identical to 6+), Michele Tafoya has risen from a 4.3 in November to 5.6 in February; Chad Hartman from 3.8 to 6.0; and John Williams from 4.9 to 7.7. Time spent listening is up about 25 percent.

No one denies WCCO hits an older set, but Moore says the station ranks sixth overall in the 25-64 age category and third 35-54.

Meanwhile two other interesting developments: KMOJ, the African-American station, racked up a 1.5 share, by far its best of the meter era; and left-wing yakker AM950 (0.9) topped right-wing The Patriot (0.8) for the first time since December 2009.

Given that these are one-month accomplishments so far, they may be blips. [Update: Probably not the case for KMOJ; the station powered up its signal from 1000 watts to 6200 in early February, a station employee says.]

How are the bigger talk stations doing? Here’s the chart: 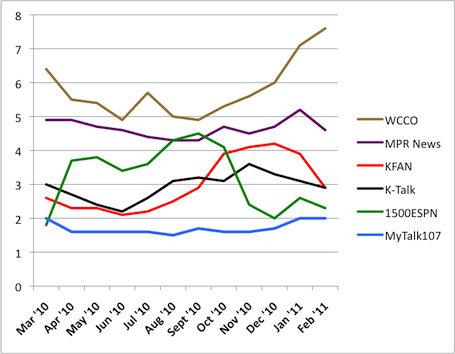 You can again see WCCO’s surge; no remarkable news for the other stations. Again, remember KFAN and 1500 ESPN are cyclical due to their Vikings and Twins rights, respectively. ESPN is up over February 2010, but they still hadn’t rebranded last February; KFAN is down a bit.

A few other noteworthy data points:

Christian station KTIS (3.6) posted its lowest number since July 2009. K102 may be an unfamiliarly low fourth but its number is above last winter. And not to overlook the obvious, but KDWB topped the numbers for the third consecutive month.