Former City Pages and MinnPost journalist G.R. Anderson, one of the boys on MyTalk 107.1’s “Colleen and the Boys,” is no longer with the station, general manager Dan Seeman confirms, adding no other details. 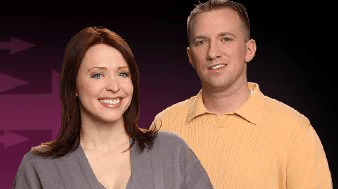 Kruse and her remaining ‘boy’

Anderson isn’t saying much, either. Here’s what he emailed me:

“I have no comment as to why. I will say that working for the Hubbard extended family — and especially Ginny [Hubbard Morris], Dan and Amy — was the best bunch of folk I’ve ever worked for, and that Colleen and Reuvers are amazingly talented people, generous co-workers and good friends. I never expected to be in radio, so by that standard, it’s been a great, fun run. I was fortunate to be a part of the company and the station and the great people I met there.”

In any event, there are a lot of distraught Facebook fans, including one lamenting the loss of her 10 a.m.-1 p.m. “radio boyfriend.”

Also, the “Colleen and the Boys” web page looks kinda weird right now with only one “boy” (Chris Reuvers) remaining.