In November, reporter Mark Albert revealed welfare benefits being used for tattoos, at liquor stores (101 times in a single month) and in places as far away as Hawaii and the U.S. Virgin Islands. In February, he chronicled cash withdrawals at casinos, bingo parlors and tobacco shops — places supposedly blocked from welfare’s ATM-like network.

Baran examined the same data and pronounced it a trifle. 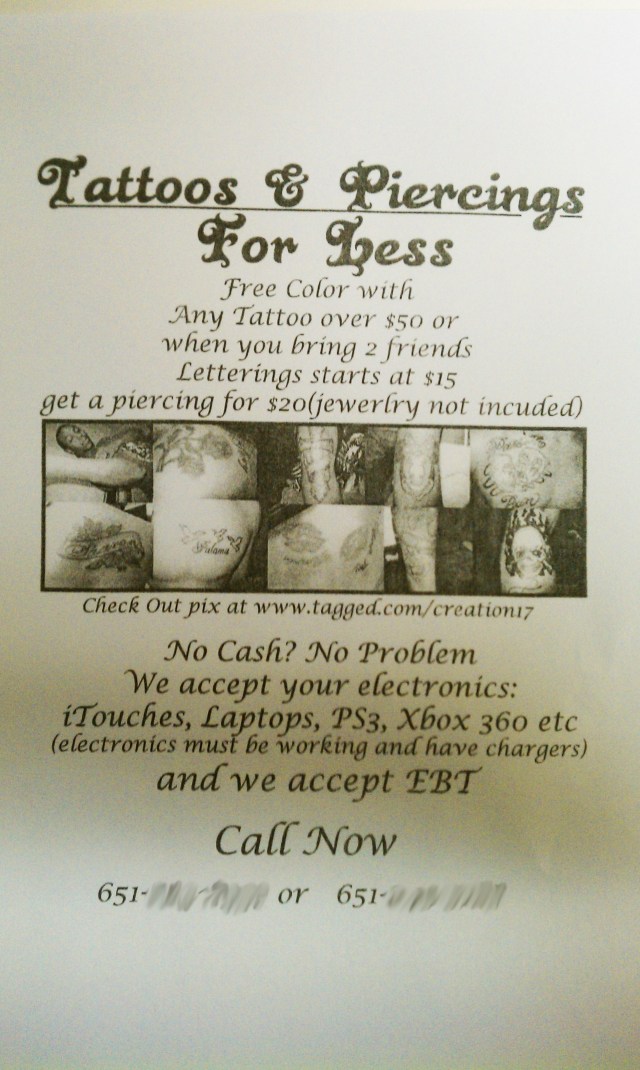 The flier that kicked off KSTP’s investigation

A half-million state welfare recipients carry “EBT” cards loaded with a federally regulated food benefit; 176,000 have a state cash allowance. Those 101 liquor-store transactions? Albert’s stories “did not explain that in most of the transactions, the recipient was using the card to buy food,” Baran stated.

Using transaction codes that distinguish between food and cash, MPR said the food totaled a mere $225.90.

Out-of-state spending? Nearly half of the $320,000 occurred in border states, especially border cities such as Superior, Wisconsin. As both Baran and Albert noted, federal law allows food-benefit purchases anywhere in the U.S.

Republicans have since proposed banning ATM use, spending on liquor, tobacco and lottery tickets and anything bought out of state, specifically crediting KSTP. Echoing Baran’s numbers, DFLers contend ATM cash is used far more often for legitimate purchases such as rent. However, DFL Gov. Mark Dayton told KSTP he would “consider supporting” the Republican bill.

After Albert’s initial reports, the state Department of Human Services revised its processes Jan. 4 to pointedly remind recipients that benefits are “to be used for basic needs not non-essential items.”

Fraud, but of a different sort
Albert says his report cited liquor stores because the state told him ATM use was banned there. The state turned out to be wrong. Albert also said his stories repeatedly distinguished between food benefits (which the state can’t regulate) and cash — and they did.

However, a look at the graphic whizzing by during the November “liquor store” reference shows almost all of the transactions labeled FSP – food support purchase. As it turns out, some liquor stores sell food, including a California liquor store mentioned in the report. KSTP viewers were never told this.

Likewise, KSTP’s report began with this intro: “Cigarettes, alcohol and tattoos – bought with your money.” The report kicked off with a tattoo artist’s flier stating “We accept EBT.”

Even though viewers saw undercover video of the unlicensed artist talking EBT, he’s not shown accepting it. That’s because he didn’t have a machine, Albert explains: “The way he does it, he will barter. He would charge $150 for a tattoo, and you would buy him $150 worth of food.”

That’s fraud, but it involves the federal food benefit, not Minnesota’s cash allowance — the report’s focus at that particular moment. (As the flier noted, “No cash, no problem – we accept EBT.”)

Albert’s larger point is correct: Minnesota welfare recipients can use the cash portion on whatever they want, even tattoos. But that wasn’t the scam here.

Again: it is possible to use the cash benefit for gambling — assuming welfare recipients have the free cash. Even MPR’s report included an interview with a woman who spent $6-$14 a month of her cash benefit playing bingo.

But how much do gambling-site ATM withdrawals add up to? Albert’s report said 330 transactions and $25,800 over two years — enough to pay for 152 welfare families for a month, he noted.

However, that total also averages 14 monthly transactions among the state’s 176,000 cash beneficiaries — and $1,075 a month compared to the $14.8 million withdrawn in September.

To repeat: it is very difficult to say what welfare recipients spend their cash on — which cuts both ways depending on which side of the welfare debate you’re on.

It’s possible some of that $25,800 withdrawn as casinos went to the equivalent of convenience-store food at a liquor store, or other societally acceptable purchases (given that casinos are major centers in some Minnesota towns). Likewise, EBT cash withdrawn elsewhere could be gambled away at the nearest gaming hall.

Albert is right that the system allows such spending, and sometimes enables it. But Baran’s tacit conclusion — that the amount is too small to merit sweeping reforms — also looks strong.

State shortcomings
Albert notes that a major facet of his report is unchallenged. The state Department of Human Services told him they blocked EBT access at “casinos, tobacco shops, cruise ships and liquor stores,” but his data dive proved that untrue.

DHS embraces the goal of discouraging spending at gambling joints and liquor stores, but third-party contractors make a ban less than airtight. The state’s Indian gaming association said it was “unaware of this issue” until the KSTP report and pledged to work with its ATM vendors on a solution.

In January, the department estimated banning EBT cash withdrawals at retailers’ registers (not ATMs) would cost $358,000 to implement, plus $114,000 annually to manage. Banning ATM use for all welfare recipients would be simpler, but risks throwing the baby out with the booze bottle, given the low percentages the MPR report revealed.

“Our ultimate goal is to hold government accountable,” Albert says. “I welcome colleagues to the story, and more attention to the issue is a good thing. We need to be just as accountable.”