To mix a sports metaphor, opposing taxpayer funding for a new Minnesota Vikings stadium is a fat pitch. So why won’t Twin Cities daily journalists take a swing? 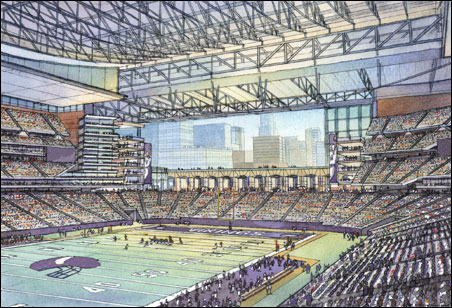 When it comes to stadium wars, Star Tribune news columnist Jon Tevlin is a militant non-combatant; colleague Gail Rosenblum and the Pioneer Press editorial page are also on the sidelines.

The only current daily employee in sync with the 75 percent of the public that opposes more than half a billion in taxpayer subsidies? The Pioneer Press’s Ruben Rosario … more than a year ago.

Former Strib opinion columnist Nick Coleman took a hefty cut at the piñata in April 2010 — but he left in December after bosses cut his weekly column to twice a month. Now a blogger, Coleman asks, “Who will speak for the public?”

Notes Gillespie, “We haven’t received any proposed commentaries or counterpoints (pro or con) in this most recent flurry of stadium news — even though we’ve done a couple of pro-stadium editorials.”

Perhaps stadium opponents have given up on the Strib — which could receive tens of millions of dollars for its land if the Vikings build there. However, Pioneer Press editorial page editor Mike Burbach couldn’t immediately recall the last anti-stadium piece there, either.

There’s no doubt the Vikings drive an enormous amount of traffic to local news sites, so all of us media types have a conflict on some level.

Tevlin bluntly explains why he’s not leading an anti-stadium charge:

“I used to be an opponent of public money for stadiums, but no longer see it as directly correlating to robbing the kiddies of their milk. Otherwise I’d have to be against public money for arts groups and numerous other activities valuable to the community.”

He also notes the preciousness of some stadium critics: “I think the Twins stadium is a great addition; I note many of my ‘populist’ friends have season tickets.”

To be sure, the heavy cloud of inevitability hangs over this debate. The Vikings are the area’s most popular sports team, the Metrodome roof did collapse, and didn’t fuller-throated stadium battles end with the sports team winning?

Pioneer Press sports editor Mike Bass notes the trickiness of outright opposition. “Advocating no tax dollars for a stadium would in essence be saying it’s better for a team to leave than for taxpayers to spend one cent on a stadium. Whether you think the practice is right or wrong, the norm and expectation today is that taxpayer money helps build a new stadium, so if we won’t help pay for one, someone (and someplace) else will. The question comes down to: Do we want the Vikings to stay?”

Even a fiery opinion piece Coleman pointed to, by St. Cloud Times sportswriter Dave Deland, doesn’t so much rule out a taxpayer-supported Vikings stadium as rip the team for not reining in its demands. (In the Strib, Reusse wrote a similar if less outraged piece.)

Still, even if dogged opposition doesn’t stop a project, it can alter its trajectory in healthy ways. Without years of intense criticism, the Twins would’ve built a roofed riverfront monstrosity where the Guthrie Theater now stands.

Tevlin, anyway, is bored with the subject: “The topic in general, rehashed relentlessly over the decades, is not very interesting to me. I’m happy to let someone else own that, as I will with, say, abortion and other top five topics of talk radio.”

One benign reason for the lack of debate is that legislators still have not produced a bill to react to; perhaps then, the critics will storm the op-ed pages, fence-sitters will jump off, and even a few reluctant supporters will switch sides.

For now, lone opponent Rosario says, “I am surprised why the bulk of the local news media commentators  seem to be more cheerleaders than taking the majority of the public’s pulse on this stadium.  … I don’t believe anyone is adamantly opposed to a new stadium. They are just opposed as to who is going to pay the lion’s share of it — which is the taxpayer.”