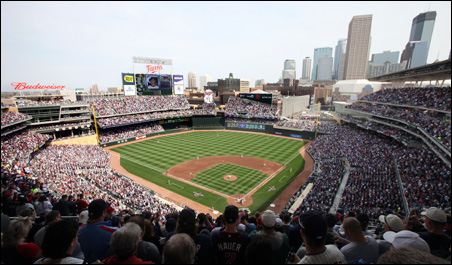 REUTERS/Eric Miller
In a season where tickets are hot, fans can only groan at the Twins entering scalper territory.

Tickets for the Twins home opener have risen seven bucks. But prices dropped $5 for a midweek series against the Royals.

It’s not happening on Stub Hub, but on the team’s official site.

In a season where tickets are hot, fans can only groan at the Twins entering scalper territory. Last year, the average Twins ticket price rose 45 percent; this year, one broker says demand is higher. For years, the so-called “secondary market” has made millions gaming game day; now, the Twins will nab some of that dough directly from fans.

On some level, a baseball ticket has always been a futures contract on a nice day or a winning team. Now, the weather, the pitching matchup, the day of the week — even a bench-clearing brawl in the previous meeting — will tickle the computer’s algorithm on a daily or even hourly basis.

“Look at the 8th,” says Digonex vice-president of business development Rex Fisher of the Target Field opener. “The average secondary market price for a home plate box is $78 minimum; max $130. That makes the average $104. Go online to twinsbaseball.com and you can get the same seat for $72. That’s $32 less.”

Of course, the Twins originally priced the seat at $65. And the $72 seat was gone within hours of our conversation.

Fans who fumed after being skunked on single-game tickets last month may wonder where the hell the team gets any inventory for their experiment. Steve Smith, Twins vice-president of ticket sales and service, swears the team did not hold any extra seats back from pre-season buyers.

“For many games, the inventory is exclusively made up of internal team holds used to meet the varying needs of players, scouts, league officials, etc.” Smith notes; combined with unsold inventory for a few cold-weather games, demand-priced tickets will number “from zero to about 1,500.”

On those games, Tanke estimates the Wolves sold hundreds of additional seats, making up in volume what it lost per-ticket. On popular games where the price rose — Celtics, Heat, Lakers — the team simply made more money. Overall, Tanke says it’s safe to say team revenues rose at least 10 percent.

That’s why tradition-laden baseball teams like the St. Louis Cardinals have skipped the experiment phase and now price every seat according to demand.

While Digonex’s Fisher says double-digit profit increases should result, the Twins limited the program to the two sections because they are relatively large and didn’t interfere with group and family discount programs.

Smith says, “Our research and our internal culture say ‘let’s make sure we do this right.’ That’s why we’re taking baby steps. We may find it’s not right for us.” 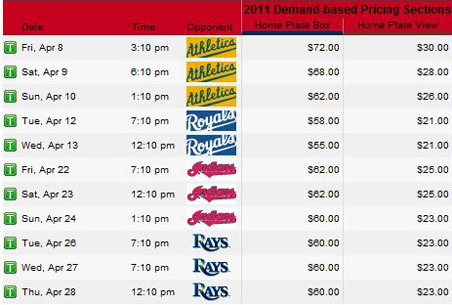 A look at the Twins’ early demand-based pricing.

Still, the Wolves’ Tanke — whose club went all-in like the Cardinals — predicts within a few seasons “all teams in all leagues” will do demand-based pricing.

There are public policy implications. The Twins’ Target Field lease demands an “affordable seating plan,” though the definition of that is as amorphous as a knuckleball’s flight.

The home plate box seats ($53-$65 per game) have never been cheapskate territory, but the $21-$28 home plate view seats are specifically mentioned among the 39 percent priced $23 or lower in the 2011 plan.

Every outfield ticket except for the overlook remains cheaper, as do top-deck seats past the baselines. “I don’t think the team’s use of dynamic pricing in two sections of the ballpark negates the overall impact of the affordability plan,” Minnesota Ballpark Authority director Dan Kenney says.

And what about the scalpers? While no one will shed a tear for them, the teams appear to be cutting into their action.

The silver lining to fans’ high-demand agony? Digonex servers may erase much of the box-office underpricing scalpers exploit.

“There used to be a barrier between the primary and secondary market, but the best way to put it is we’re an appreciated season ticket holder of the Timberwolves and they’re an appreciated franchise of Ticket King,” Nowakowski says. “We have an extremely, extremely open relationship with them. We share data with them, help price season tickets, single-game tickets, demand-based tickets.”

Digonex’s model, like those of its competitors, incorporates reseller prices.

Ticket re-sellers retain some important advantages. Unlike the clubs, they can sell below face value (assuming they bought the seat at even lower prices). There’s also less brand damage if markups soar.

And those $72 seats for the Twins home opener? They were likely single tickets. Scalper prices were higher, but the selection was far more vast.

Nevertheless, Digonex’s Fisher says fans who formerly ignored the team website before big games should now check there first.  Brokers who camp out online will be less likely to buy at higher prices, but the team’s price might still be lower enough to make a difference.

Amid last year’s record demand, the Twins raised 2011 season ticket prices 5-9 percent, though a few categories dropped. Ticket King’s Nowakowski thinks Target Field will become the next Wrigley or Fenway Park, a perennial hot ticket even in lean years — which if true, will only tempt the club to price up, by either the traditional or demand-based route.

The Twins’ Smith says the team is more conscious of long-term “brand promise to attract a good fan base in strong years and in lean years. I really believe regardless of what level we approach demand-based price, we are always going to make sure we’re providing our fans with a level of affordability.”