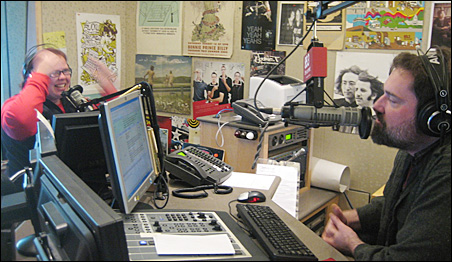 In December 2009, a mere 1.5 percent of local radio listeners tuned in to Minnesota Public Radio’s The Current. That left the hip music station in 20th place, behind every other tune-spinner in the market, including MPR’s venerable Classical service.

In April, the station topped its nearest commercial sound-alike, Cities 97. By June, that 1.5 had nearly tripled to 4.3, good for ninth overall. Among 25-to-54-year-olds — precisely the younger listeners MPR coveted when when it opened the station in 2005 — The Current ranks fifth, eclipsing JACK-FM, 93X, KOOL108 and bearing down on longtime powerhouse KDWB. Among 18-to-34-year-olds, the station is sixth.

What’s gotten into the scenesters? Theories include consistent (but not too consistent) programming, a relatively obscure band’s Grammy and even crappy seasons by Brett Favre and Joe Mauer.

Reducing sad-bastard piano ballads
Inside MPR’s decidedly non-scruffy walls, program director Jim McGuinn’s office is charmingly archaic: magazines, tour posters, an acoustic guitar and a boom box. A musician and veteran of public and commercial radio, the lanky, T-shirted McGuinn is steely-eyed about the business, but retains a puppy-dog enthusiasm for the music.

As one fan told me, “I think Jim McGuinn has been an extremely positive influence on the station. He’s reduced the sad-bastard piano ballads by at least 65 percent since 2007-08.”

The Current was designed to be “more taste-based and hunch-based,” according to former MPR exec Sarah Lutman. From the beginning, the station’s tastemaking was potent enough to pack local clubs and alter sales charts, a phenomenon City Pages music critic Andrea Swensson dubbed “The Current Effect.”

But even though the station was fulfilling its mission to, in Lutman’s words, “be a music service that has a very, very strong community focus and an energizing effect on the civic engagement of the next generation,” its ratings still sucked.

McGuinn came from Philadelphia modern-music public-radio station WXPN in January 2009, four years after The Current debuted. Philadelphia was the first test market for Portable People Meters (PPM), the user-wearable devices that pick up a silent tone to record listenership. They debuted here in April 2009.

McGuinn hit town after the Current’s playlist underwent a major upheaval — from an “antiformat” where DJs literally brought in favorite CDs from their collections, to a tighter, consultant-advised format that caused one part-time host to quit over the moroseness.

“It was a fairly abrupt shift,” concedes morning co-host Steve Seel, noting the playlist became “much tighter” before McGuinn “relaxed” it.

Seel calls McGuinn a “rabid music-head” who has made the station more “aesthetically pleasing.” Translation: You’re more likely to hear an alt-hit on The Current, or a song The Current may turn into an alt-hit.

McGuinn’s Current is also more likely to play older bands that shape the station’s ethos, such as The Clash. As morning co-host Jill Riley puts it, “Six years ago, we’d play The Clash once every six days. Now, we’ll play it more often as one of our core influences — but not just [pop hit] ‘Train in Vain.’”

As simple as A, B, C?
McGuinn keeps track of all this with the MusicMaster scheduling system, a thoroughly modern and common technology.

There are five queues of songs that are assured airplay: “A” contains artists whose albums get multiple-track play. Single-track spins descend through B, C, D and E lists.

I happened to grab a copy of early April’s “C” queue, which contained 19 artists such as Alexander, Beady Eye, Black Joe Lewis, The Cars, Cut Copy, Dum Dum Girls, G. Love, Grouplove and James Vincent McMorrow. These days, the “A” list is populated with Adele, Bon Iver, Fleet Foxes and the Foo Fighters, among others.

Those who think The Current has become too predictable and hit-driven are usually grumbling about the “A” queue. McGuinn — who calls The Current “a station for curious, informed listeners” — is unapologetic.

“Someone might say, ‘Oh, that’s terrible,’ but it opens the station to more folks,” he says. “Here, it feels like you’re on a balance beam. You want to appeal to the complete over-the-top music head, but you also don’t want people to feel like they’re not invited to the party.”

The program manager sees a huge segment of his audience as former or wannabe musicheads simply overwhelmed with an Internet full of choices. (Yours truly falls into this category.) In this sense, The Current seeks to be a curator and compete with iTunes, Pandora, eMusic and Spotify.

McGuinn contends The Current’s 6,000-song playlist remains six times bigger than KQ’s, and 12 times bigger than Cities’. “Most stations use [poll-based] audience research; here, humans do it,” he says. “It’s based on what’s selling tickets in clubs, what’s being written about.”

Every week, McGuinn, music director Melanie Walker and hosts such as Bill DeVille meet to do hunch-based queue rearranging, which includes a couple-hour listening session of everyone’s favorite new tunes. It’s the kind of morning meeting you’d like to be invited to.

As a guy who stopped listening during the morosest period, I couldn’t help noticing McGuinn cheerleading for the more upbeat tunes. Seel labels part of this group “Swaggering Rock Boys,” adding there’s still plenty of room for broodier stuff like his favored “Slowcore.”

McGuinn knows the little stylistic tricks that succeed in a post-diary era, where ratings depend on people listening longer, not just remembering station call letters. A lot of the stuff is basic blocking-and-tackling: how to tease what’s coming and to balance between the “old, new, familiar and surprising.”

Still, the station retains the human touch that sets it apart, he insists. “Sixty percent of any given show is programmed by hosts on the fly or that day. It’s zero percent at most stations.”

Where the boys are
Rock boys have a lot to do with The Current’s ratings success. Men make up roughly 60 percent of the station’s listenership; Cities has as many 25-to-54-year-old women tuned in, but only half as many men.

One fun factor that might help explain The Current’s rising ratings: the lousy performance of local sports teams.

McGuinn and MPR researchers acknowledge that their station shares a lot of listeners with ESPN 1500, which carries Minnesota Twins games, and KFAN, the Vikings rights-holder. These days, following either team feels like inserting bamboo shards underneath your fingernails. Even if you dislike a Current song or two, music is a surer refuge.

The Current’s ratings slide coincided with Brett Favre’s summer 2009 arrival, remained low through the Twins’ magical 2010, and began rocketing around the time the elderly quarterback got the snot kicked out of him at TCF Bank field last Christmas.

However, there’s one flaw in the theory: KFAN’s ratings are up spring-over-spring and ESPN 1500’s haven’t really dropped.

Where Dale and Tom aren’t
Nothing personal against former “Morning Show” hosts Dale Connelly and Tom Keith, but their Keilloresque music-and-humor show was a shotgun marriage to The Current’s programming day. After moving from Classical in 2005, the show’s run ended in December 2008, a month before McGuinn’s arrival.

Because so many people listen to morning drive, it’s a major part of the overall ratings number. McGuinn says it takes a couple of years to establish a new morning show, especially after a big philosophical change. Now, he notes, Seel and Riley fully contribute to The Current’s gains.

Their rating has more than tripled among 25-to-54-year-olds in a year. Twice as many people listen, and they’re listening two-and-a-half times longer. In this age group, the now-sixth-ranked show even tops MPR News’ “Morning Edition.”

A cultural moment
While programming directors rival politicians in how they talk up themselves and talk down competitors, the more mature ones acknowledge trends can be bigger than themselves. Plenty of folks think The Current benefits from the culture swinging their way, symbolized by Arcade Fire’s unexpected “Album of the Year” Grammy in February. 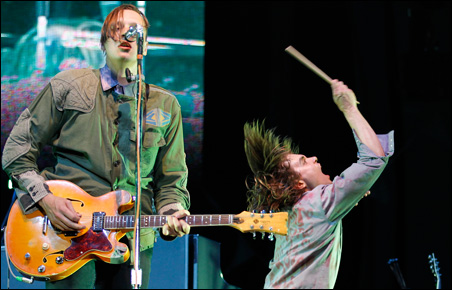 The Current’s fans knew who the band was, but the win left many listeners scratching their heads; sites such as this one popped up in exasperation/tribute.

The idea: There’s more vitality in music’s long tail, and audiences for once are catching on. The Current, by dint of smarts and good luck, gets first-mover advantage — and because the station is commercial-free, it’s harder for a commercial station to lure listeners back.

Lutman, now president of the St. Paul Chamber Orchestra, theorizes that The Current’s rise may also reflect other growing trends.

She says MPR eventually looked at a lot of research when creating The Current, “but at first this was gut instinct, more from knowledge of the cultural community, what media outlets were serving them. Food trucks, being out, bicycling, art galleries, fashion, that whole part of the cultural community. It had become pretty clear there was a lot going on that had no outlet. That’s why The Current is a good name for it — it’s alive for its time.”

How long will it last?
For all this profundity, how much of The Current’s rise is a simple statistical fluke?

In the meter-ratings era, panelists stay on longer, often over a year. Rival programmers, noting an incredible rise in the “time spent listening” rating component, mutter that a few die-hard listeners produced The Current’s spike. They think the station will crash to earth when these folks eventually roll off the panel.

McGuinn doesn’t rule out such flukes — “the first time ratings went up, I said, ‘Ooo, is this real?'” — though he notes die-hards would affect only time spent listening and not the other key ratings component, individuals tuned in (aka “cume”).

If The Current’s ratings return to unremarkable, consequences may not be as severe as at commercial stations.

Sponsorships — advertising by any other name — are a major source of MPR revenue, but that line item is dwarfed by memberships, and those contributions rely on passion and mission more than mass appeal.

Says Lutman, “A broadcast station — think of the very name of it — has to reach a lot of people, and if it doesn’t, it’s a bad use of the instrument in your hands. But while ratings are important, [MPR’s] world doesn’t live or die with them. There are a number of other indications: How do you make this a great place to live, how are the clubs doing, do people come here and tour? Those are important to any public-spirited institution, and I’m not just making this up. People there get really excited about public service.”