If you read more than 20 online Star Tribune stories a month and don’t subscribe to print beyond Sunday, expect to start paying Nov. 1, officials say. That’s also the day the paper’s iPad app is restricted to daily print subscribers, or those who buy a new digital subscription.

For the first ten weeks, non-subscribers will pay 99 cents a week — about four bucks a month — for full access to startribune.com, the mobile site, eEdition print replica, iPad app and forthcoming iPhone and Android apps. Adding Sunday print will cost another 30 cents weekly. 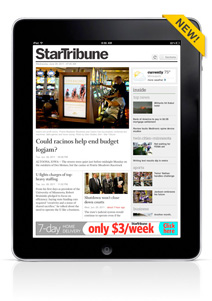 Current Sunday-only print subscribers can add the digital subscription for 29 cents a week, or $1.25 a month.

The price goes up after the introductory period, but the Strib isn’t saying how much. The feet-wet period would end mid-January, if the organization hits the Nov. 1 rollout date.

Print subscribers who take more than the Sunday edition get the run of the place for no extra charge.

Access to a few digital products, including politics and sports newsletters and a high school sports-score app, remain free to everyone. (The regular news app will still be a free download, but won’t work without a subscription.)

The Strib says 7 million people read its digital content each month, and 3 percent read more than 20 stories. If none are current daily print subscribers, that means about 200,000 frequent readers would bump up against the coming screen nags.

How many will pony up? The Strib isn’t releasing target figures, but earlier this week the New York Times claimed 324,000 digital subscribers six months after unveiling its so-called “meter.” The Strib lacks the Times’ national cachet or international readership. However, if 1 10 percent of those 200,000 frequent readers eventually pays $75 a year, the Strib would gross an additional $1.5 million annually.

Critics contend the Strib may lose at least that much in web ads should readership go down. Officials allow that an audience decline might happen, but advertisers more highly value a paying “engaged” audience, offsetting the loss.

Publishers like the Strib’s Mike Klingensmith don’t think of digital paywalls and meters as ends in themselves; fees are also meant to buttress still-profitable print subscriptions because “free digital access” now has dollar value. Similarly, qualified ads from print advertisers now “flow through” into the iPad app for free, which may be a national first, Strib marketing exec Steve Yaeger says.

The question for competitors is how they take advantage of the Strib’s new reader hurdle. Will there be a meaningful number of disgruntled readers to snatch? Can smaller but staunchly free local news operations like the Pioneer Press, MPR, MinnPost or TV successfully market themselves as “all free all the time”? (And will this discourage linking to the Strib if links from competitors are counted unlike social networking and search engines?) Will this make it easier for a Huffington Post-like upstart to emerge?

The Strib, which will report year-over-year paid circulation increases any day now, is approaching a 50/50 mix of consumer and ad revenue — an even split unheard of for most of newspapering’s ad-dominated history. Klingensmith believes consumer dollars are more stable than ad bucks in today’s environment.

The digital subscription is only part of the Strib’s bid to claim the mantle of “premium” product. This Sunday, the Strib is expected to unveil some design tweaks to its print edition including more color on inside news and sports pages, and beefing up Sunday Metro, Monday business, and feature sections such as Homes, Travel, and Taste.