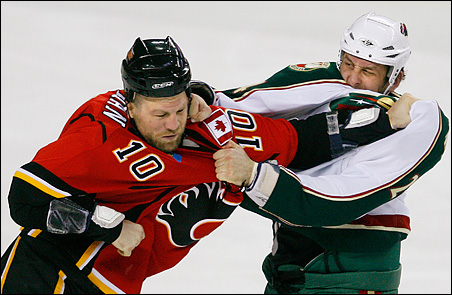 John Branch isn’t completely sure, but he thinks “Punched Out: The Life and Death of a Hockey Enforcer” is the New York Times’ biggest multi-department compilation ever.

“Striking, destructive changes in a person who has not even reached their 30th birthday,” noted a Boston University researcher of the 6-foot-7 Boogaard, who riveted crowds with his punching power yet earned affection with his playful personality.

Will hockey fans finally feel shame about the bare-knuckle debasement that many lust for? Will Wild ticket buyers condemn a club that refused to make any officials available for interview? Will the broader culture care enough to insist on change? Will NHL commissioner Gary Bettman’s pathetic rationalization — “fighting is punished” (by penalties that hurt neither team) — carry the day as it does in football and blood sports?

The 44-year-old Branch isn’t willing to speculate. In that time-honored reportorial way, he says diplomatically, “Not be crass, but that really wasn’t my concern. I’m not trying to make change. I stayed focused on Derek Boogaard.”

At least within the journalism world, awe is mixed with envy: The Times is advertising this as a six-month project, the sort of time few journalists rarely get.

“I sort of laughed about that,” Branch says. “I started in June, but I took a month off in the summer! Still, it was all I was working on — a great luxury. It’s something I know is rare.”

Even though Boogaard played a season for the New York Rangers, his May 13 death from alcohol and Oxycodone in Minneapolis isn’t the sort of thing that would usually absorb the nation’s most prominent newspaper.

“Our sports editor, who used to cover hockey years ago, came back [to the department] in the spring,” recalls Branch, a sports features writer. “I was overseas, and he emailed and said, ‘When you come back, we should talk about Derek Boogaard.’”

Despite Branch’s issue-agnosticism, the Times has done more than any organization to publicize Chronic Traumatic Encephalopathy (C.T.E.), a progressive dementia recognized in many football players and at least three other hockey players. Branch makes sure to note this is his first CTE story; colleague Alan Schwarz is the guy who’s received the Pulitzer nominations, so Branch’s work built on his paper’s.

Though the story eventually included a photographer, a videographer, two multi-media producers and a graphic artist, Branch says his editor’s original instruction was, “’Why not spend a month or two getting to know as much as possible about Derek Boogaard?’”

At least in terms of time, “That’s probably the greatest thing a reporter will ever hear.”

The story grew as “we realized all these potentially uncovered and interesting tangents — hockey enforcers, youth hockey in Canada, fighting in the NHL,” Branch explains. “In all of our coverage, we’d do a single story, but [we asked] what if we stepped back and tried to explain an entire life?”

Getting the Boogaard family’s cooperation was the reporter’s biggest worry: “I’d approached them in June, through mail, phone calls. I told them what the project was, and we’d likely do it if they cooperated or not, but it would a much better story if they could share the full fabric. It would be part of Derek’s legacy. I committed to doing it right, taking time, and I told them we would probably put more resources into this than any other sports story this year.”

Eventually, Branch heard from a brother that Boogaard’s father would talk; that interview took place in Minneapolis. “His mother was the last to come around. She was suspicious about how Derek would be portrayed. I told her, ‘The only promise I can make is to do it fairly; it won’t be glossy, and you may find out things about your son you don’t know that may be hurtful, but this is what I think is the best story.’”

It’s obvious from the stories that the Boogaards cooperated extensively. Because only the family could make their son’s CTE diagnosis public, they essentially gave Branch a scoop.

Branch says the series’ timing was not tied to the CTE revelation (the Times expected the diagnosis to be issued before reporting was done). Somewhat ominously, though, Branch says he has not heard from the Boogaards since series began running Sunday. He says if he hasn’t heard from them in a couple of days, he’ll call them. “They’re probably sitting back, watching the reaction.”

Branch is careful to note (as the series does) that researchers don’t know why CTE occurs in some folks and not others. It is also difficult to tease apart Boogaard’s fighting from the substance abuse that dogged his professional career.

“Certainly, if you were to ask the doctors, they’d say that level of CTE did not help his addiction problems,” the reporter says. “But how much did it hurt?”

As Boogaard’s mother laments in one video, “I’d like to blame someone. I can’t.”

But it’s also not hard to see the NHL’s Bettman as a villain whose rationalizations, denials and obfuscations bring to mind a smoother version of Martin Short’s tobacco spokesman Nathan Thurm.

“The reason we put the full 20 minutes [of the Bettman interview] online for everyone to see is that we didn’t want people to say we used certain quotes,” Branch explains. “The NHL knew in July we were working on the story, they knew the parameters of the story. The only thing I would say is that Gary Bettman knew we were coming for four to five months, so they had plenty of time to prepare.”

As for our non-cooperative Wild?

“The Wild knew back in September I was working on a story,” Branch says. “The tough part of that is that the Wild had an ownership change, and their front office was totally reshuffled in 2009, right about the time Derek Boogaard had surgery and started using prescription pills. Most Wild people had been around only one year [though] that did not include [team doctor] Sheldon Burns, who has been there many years. But the Wild declined to make him available.”