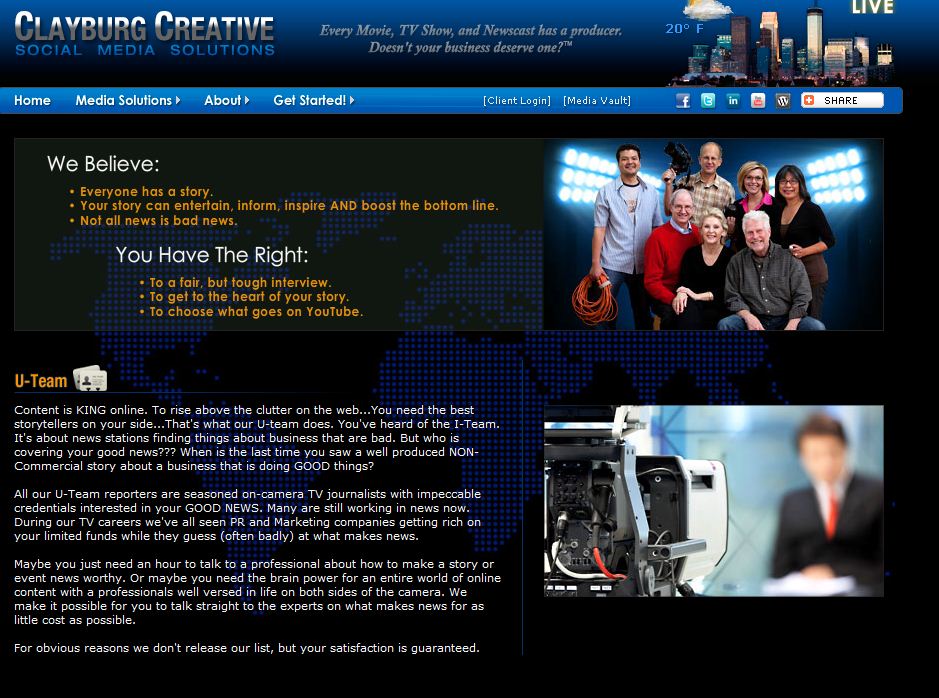 “As traditional media wither and new communication channels are created, corporations don’t need to find someone at a newspaper or TV station to do a story about them,” Reinan wrote. “They can tell their stories to consumers through their websites, through Facebook and Twitter, and through online videos.”

After the piece ran, an eagle-eyed reader directed me to Clayburg Creative’s website. It includes this statement about the former Fox9 meteorologist’s “U-Team” — described as an “I-Team” covering “your good news”:

“All our U-Team reporters are seasoned on-camera TV journalists with impeccable credentials interested in your GOOD NEWS. Many are still working in news now. …Maybe you just need an hour to talk to a professional about how to make a story or event news worthy. Or maybe you need the brain power for an entire world of online content with a professional well versed in life on both sides of the camera. We make it possible for you to talk straight to the experts on what makes news for as little cost as possible.

“For obvious reasons we don’t release our list, but your satisfaction is guaranteed.”

Are local TV reporters getting paid to advise clients how to get stories covered … or even help produce those stories themselves? That would pretty much violate every canon of the profession.

I called Clayburg to find out if this was so. I asked if she paid people working in Minnesota newsrooms today.

There was a pause. “We can put you in touch with somebody if that is a story they have a particular passion with,” Clayburg replied.

As we talked, Clayburg steadily shrank the U-Team’s parameters. She did not use any “contracted talent” — anchors or prominent reporters — only those who worked in newsrooms on a freelance basis. “To be honest, we don’t do it very often,” she said. 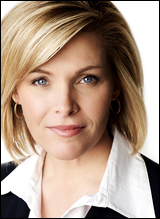 The secretive nature of the list? So that no one could request a specific person in hopes of influencing them, Clayburg stated.

When I asked again if she currently employed anyone working in a Minnesota newsroom today, she said, “Not at this time.”

Her clients will have to decide if the “U-Team” is all it’s advertised as, but Clayburg notes that side businesses are far from unprecedented, especially these days. Clayburg Creative pre-dates her tenure at Fox9 (2006-2009), though she says she “made the choice not to be paid” for advice while she worked for the station.

Fox9 employees told me they sign a conflict-of-interest disclosure form, so management can judge entanglements. I got a fuller explanation of a similar policy from KSTP assistant news director John Mason:

“At KSTP, our contract employees (that includes reporters, anchors and many producers) agree to provide services ‘exclusive’ to us. To provide services outside would put them in violation of their agreement with the Station.

“We also have a Conflict of Interest Policy that all employees sign. While it acknowledges ‘It is difficult, if not impossible, to describe all situations that may arise,’ it lays out the Company’s policies and expectations so anyone who works here knows what it is expected.”

Added another veteran news boss who asked not to be named, “We only use freelance sort of journalists who don’t have media-related things as reporters. I would only contract with people in the news business, [not] the p.r. business.”

Mason’s conclusion: “Personally, I think the SPJ’s Code of Ethics has it right:  ‘Journalists should be free of obligation to any interest other than the public’s right to know.’  In other words to act independently. As a reporter, I always worked hard to maintain that ‘arm’s-length’ objectivity and I work with our staff to do the same.”

Still, Clayburg insists we should assess the TV world “as it is right now — not 10 years ago, not five years ago. … Stations are cutting back [on full-timers] more and more; someone who sells cars is doing weather on the weekends.”

The journalistic encumbrances of making a living aren’t lost on me. Early in my career, I supplemented my reporting checks with occasional gigs for company magazines such as Fed Ex’s, which culminated in a trip to Disneyland to write a “good news” story.

Would I have written about Fex Ex or Disneyland for the newspapers or magazines I reported for at the time? Never. However, these days, I’m a volunteer board member of a couple of local farmers markets;  I’ve written (unpaid) columns for the local community paper, been interviewed countless times, cranked out tons of social media stuff, though I’d never solicit news-org coverage.

As we wrapped up our conversation, Clayburg said she’d just heard from a friend in Connecticut who’d been laid off. Her station told her they couldn’t afford to pay you. “They’re just hiring younger and cheaper,” Clayburg said with a sigh.

To be sure, many mid-career pros who’ve lost jobs in the Great Full-Timer Die-Off need paying gigs where they can find them. Still: Selling cars might be OK for a meteorologist, but were I a news director, I’d make sure no reporter, photojournalist or producer was someone else’s media consultant.